‘Where did the money go?’ Haitians denounce corruption in social media campaign 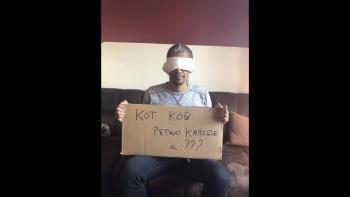 In the photo, a blindfolded man holds up a cardboard sign with a question scrawled on it in Creole: Kot Kòb Petwo Karibe a, or where is the PetroCaribe money?

The message posted on Twitter by Haitian filmmaker and writer Gilbert Mirambeau Jr. a week ago has sparked a social media campaign. Tech- and social-media-savvy Haitians are taking to Twitter and WhatsApp to denounce corruption and demand accountability from Haiti’s political class, accused by a committee of the Haitian Senate of squandering billions of dollars in proceeds from Venezuela’s discounted PetroCaribe oil program.

The campaign, called the #petrocaribechallenge, is attracting Haitians both in and out of the country, and comes during a turbulent time for Haiti. Haitians are awaiting the approval of a new prime minister by Parliament after a government decision last month to increase fuel prices by as much as 51 percent sparked days of violent protests and looting.

In the aftermath, Haiti’s Prime Minister Jack Guy Lafontant and his cabinet were forced toresign and Haitians, angry over years of unchecked corruption and lack of development, began asking where the PetroCaribe money went.

“We are fed up with what’s going on,” said Mirambeau, 35, who tweeted the photo on Aug. 14 from a living room in Canada. “It’s like we have a knife under our throats, and are looking at the government and not doing anything.”

Following Haiti’s 2010 earthquake, Venezuela forgave $295 million in debt that Haiti had accumulated since joining the PetroCaribe program in 2006. But in the years since the quake, Haiti has racked up about $2 billion more in debt to Venezuela under PetroCaribe.

The program allows Haiti and several other struggling Caribbean and Latin American countries to acquire petroleum products at a discounted price and pay the costs over 25 years at a 1 percent interest rate. The savings are supposed to finance social and economic projects — which critics in Haiti say has not happened.

Instead, politicians have embezzled it, a Haitian Senate Commission investigative reportalleges. Released late last year, the probe detailed $1.7 billion worth of no-bid contracts given by the Haitian government between 2008 and 2016. The projects, which included government ministries, housing for the poor and a new parliament building, were all awarded using PetroCaribe money.

The contracts were signed and money was paid but, the report found, many of the projects were never completed.

“This money was supposed to help us all have a better life,” said Mirambeau, noting that most of Haiti’s 11 million citizens are struggling to survive amid a rapidly depreciating currency, ailing public health system and lack of housing.

His original tweet, Mirambeau said, was meant to be nothing more than the frustrated airings of “a concerned citizen” who divides his time between Canada and Haiti. But then something happened.

A socially conscious Haitian singer known as K-Lib with more than 61,000 Twitter followers, saw the post. Two days later, he tweeted his own photo, branding it #petrocaribechallenge and calling on other Haitians to do the same.

“The Petrocaribechallenge isn’t just a challenge,” K-Lib said. “It’s a massive movement against all the corruption, all the money that has just disappeared.”

K-Lib and others say as much as $3.8 billion has been squandered. The number, however, is in dispute because some projects have been built, Venezuela wrote off part of the debt in 2010 and economists put Haiti’s total debt today at about $3 billion.

Still, at least 62 people in Haiti have already filed legal complaints over the money, which is being looked into by an investigative judge.

K-Lib — whose real name is Valckensy Dessin — said the anger and frustration that sparked last month’s civil unrest are also fueling the cyber activism that has spurred calls for protests on the ground, including a Friday sit-in in front of the country’s Superior Court of Auditors. On Thursday, black-and-white posters appeared on utility poles, and banners hung from power lines around the nation’s capital of Port-au-Prince asking where the PetroCaribe money has gone.

A series of other posters featuring images of former Prime Minister Laurent Lamothe and former U.S. President Bill Clinton, who co-chaired the country’s interim reconstruction commission after the quake, asked a related question: Kote Lajan CIRH La, or where is the money from the Interim-Haiti Reconstruction Commission? Those posters, which were paired with images of current President Jovenel Moïse and ministers in former President Michel Martelly’s administration, were removed Wednesday.

“I am of the generation who’s never seen a day of stability in Haiti, and I am tired,” said Daphne Valmond Bourgoin, 39, a mother and entrepreneur in Port-au-Prince who has joined the Twitter campaign. “Corrupt governments have come and gone and we sit passively as if they don’t affect us.

“The challenge to me means get up, mobilize and start acting for the Haiti I want,” she said. “I want to stay in Haiti, raise my kids here, but I have access to absolutely nothing, and money designated to help just disappeared. It’s unacceptable. We need to know what happened to it and those responsible need to face the consequences.”

But the anger isn’t just over squandered money. It’s also directed at Haitian politicians and their privileges in a country where two out of three people live on less than $2 a day and concerns are increasing over the potential for more social unrest.

During recent political mudslinging, the president of the Haitian Senate and an opposition senator accused each other of corruption. Sen. Ricard Pierre said Haiti’s cash-strapped government was paying $115,500 to rent a residence for the head of the body, Sen. Joseph Lambert. Lambert in turn accused Pierre of stealing the chamber’s generator.

Pierre denied the accusation. Lambert announced that the Senate would cancel the lease and curtail lawmakers’ privileges. The damage, however, was already done.

“They were not even ashamed,” K-Lib, 37, said, adding that it’s time for Haitians to stop accepting “corruption and impunity” as normal.

“After the last events that happened to Haiti, the Haitian population understands the necessity for them right now to take part in everything that is happening in the country,” he said. “What’s happening is a movement of massive collective consciousness.”

Haitians have long taken to the streets to express dissatisfaction with corruption and the country’s political leaders. But this time, social media is playing a significant role in rallying Haitians.

“Every Haitian needs to stand in the four corners of the world with their posters in their hands to ask where is the PetroCaribe money,” Haiti-born actress Gessica Généus tweeted on Wednesday.

A Twitter analysis provided by Mirambeau from Brandmaxima and Keyhole, marketing companies that track hashtags, show that the #petrocaribechallenge hashtag has been re-tweeted over 13,000 times and was potentially seen by 3.6 million people on Twitter. The hashtag has also made its way onto other social media platforms. Various Haiti-related WhatsApp forums are being flooded with photos of Haitians asking what happened to the money. Comedians and budding filmmakers are also producing short video clips.

While some offer comedic relief, others promote incorrect information or offer pointed criticism of politicians. One video featuring a clip of the former prime minister, Lamothe, talking about rushing former President Michel Martelly to a Miami hospital also shows images of sick patients lying on the floor of the country’s largest public hospital. The same video shows several slides of the charity-run University of Mirebalais Hospital, which was built for $17 million in the aftermath of the quake and uses solar-powered energy, helping 500 patients a day, the video says.

The social media push is having an impact. Some politicians and activists have sought to steer the focus in a different direction to get back at adversaries. Some business leaders also are pointing an accusatory finger at one another as having benefited from the largess, and calling on government auditors to finally put the question to rest.

The commission has called for charges to be filed against two former prime ministers, several ex-ministers and the owners of private firms on grounds they misappropriated and embezzled money that left post-quake Haiti with unfinished government buildings, poorly constructed housing and overpriced public works contract.

Both Bellerive and Lamothe have labeled the Senate committee’s report as biased and partisan, while strongly objecting to the accusations. Martelly’s former finance and commerce minister Wilson Laleau, who is named in the report and serves as chief of staff for current President Moïse, also dismissed the allegations.

The former ministers’ denials have done little to sway Haitians, who also have chosen to ignore the fact that Venezuela forgave part of Haiti’s debt.

Sen. Evalière Beauplan, who spearheaded the Senate probe, said the social media campaign is proof that the commission’s work is paying off.

“Now they have to hit the accelerator and keeping going,” he said. “It’s not enough just to ask where the money is. They have to go and find the people who took it because we still don’t have hospitals, modern roads, universities or social housing for the poor. We have no expressways or an airport that promotes our image.

“We asked them to manage the money for us to build us infrastructure and they didn’t do that,” he added.