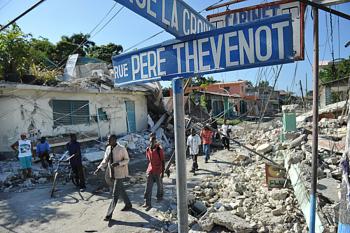 In 2010, the Haitian capital of Port-Au-Prince was devastated by an earthquake which claimed more than 100,000 lives. Following the earthquake, the devastation in Haiti was the top story on every news station and garnered the attention of politicians, celebrities, and even received a visit from former presidents Bill Clinton and George W. Bush.

However, since the devastation of the 2010 earthquake, Haiti has received minimal attention from the international community, and most of the attention it has received has been mostly negative, focused on the country’s high rates of poverty, violence, and government corruption. However, despite seemingly insurmountable challenges, Haiti has made some incredible progress in the area of health care delivery. Specifically, Haiti has implemented successful public health screening, treatment and eradication programs for numerous significant diseases including HIV, Tuberculosis, and Cholera.

Haiti’s HIV/AIDS screening and prevention programs are among the most successful in the world, the outcomes of which have produced a progressive decline in HIV prevalence in Haiti which rivals that of industrialized nations. The success of these programs can be traced back to the beginning of the HIV epidemic in the early 1980s. In 1982, a group of Haitian Health Care professionals received support from Cornell University and published the first study of cases HIV in the Caribbean nation.

This group of health care professionals became known as the Haitian Study Group on Kaposi’s Sarcoma and Opportunistic Infections or GHESKIO which grew into a large NGO dedicated to the diagnosis and treatment of HIV/AIDS and associated infections.

Since the formation of GHESKIO, multiple NGOs have been formed with the goal of improving health care in Haiti. This includes organizations such as Partners in Health which is based in the rural central district of Haiti and used a unique model of employing local community health workers (or accompagnateurs in Haitian Creole) to deliver care to rural Haitians that do not have access to reliable health care.

Partners in Health and GHESKIO are just two of many NGOs providing HIV/AIDS prevention and treatment services in Haiti. The success that Haiti has seen when in fighting HIV/AIDS is the result of the work that these NGOs have done in conjunction with the Haitian Ministry of Health to develop a national strategy for detection, prevention, and treatment to combat infectious diseases including HIV and Tuberculosis. Even more critical to the success in Haiti is the involvement and training of local community health workers to reach those with limited access to screening and health care facilities.

The programs that have been implemented through the joint efforts of the Haitian Ministry of Health and NGOs can be used as a model in other developing nations to fight not only HIV, but also other significant diseases such as Ebola, Malaria, Tuberculosis, and many others that are responsible for millions of deaths globally each year.