After Hurricane Matthew, many victims in Haiti feel abandoned 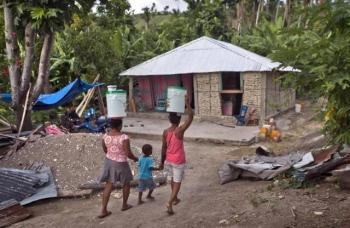 Farmers in the Grand’Anse region of Haiti say nine months after Hurricane Matthew barreled through they are struggling to rebuild their lives. They feel abandoned by foreign donors and Haitian government officials.

A feisty Vanette Joseph slowly navigates her way through a field of debris, passing broken branches and other reminders of last year’s devastating 145-mph hurricane before spying one of her few surviving plants.

“All of the lime trees were destroyed,” she says as something catches her eye. She moves in for a closer look.

Much like Hurricane Matthew put a choke-hold on her livelihood, an invasive coiling vine has gotten hold of the lone standing lime tree, and Joseph, 91, isn’t happy. So the determined farmer pushes her eyeglasses on top of her forehead, reaches in and starts pulling.

“I had 100 coconut trees,” she said. “They used to give me at least 10 sacks to send to Port-au-Prince. Now, I can’t even find one coconut to put in some rice to eat.”

For most of her life Joseph has been self-sufficient, building a life off of coconut, breadfruit, plantain, mangoes and other crops, which she and her late husband planted in this western breadbasket, 172 miles from Haiti’s capital city of Port-au-Prince.

Then Hurricane Matthew rumbled through in October and uprooted it all, leaving behind $2.8 billion in damage.

In Matthew’s immediate aftermath, U.N. and nongovernmental agencies trucked and flew in thousands of metric tons of rice and vegetable oil and distributed emergency tarps to storm victims all along Haiti’s southern peninsula, where the storm’s Category 4 winds hit. And when reports of hunger surfaced in this rural plain and other storm-ravaged communities earlier this year, they stepped in to do more.

But nine months after Matthew’s passage, the free rice rations have stopped and food shortages have been replaced with unaffordable high-priced staples. Once locally available, they are now being trucked in. All along the peninsula, peasants who have been eking out a meager existence by subsistence farming and fishing say they’ve been left to fend for themselves amid a painfully slow recovery and another hurricane season.

They feel abandoned, they say, by foreign aid donors and politicians as they struggle to rebuild their lives, not just from Matthew’s wreckage, which left them with massive loss of revenues, but from the heavy rain and drought that ensued and turned their harvest to dust.

“We can spend 30 years and we’ll never bounce back,” said Duvanel Francois, 42, who is trying to earn enough to pay for school-exam fees in the rural outskirts of the seaside city of Jérémie by helping another farmer rebuild his home. “We used to have plantains; we don’t have any. We used to have oranges as fruits; we don’t have any. We had avocados, potatoes. These were our oxygen. Once you lose them, you’ve lost everything.”

Francois was among several men shoveling clay-colored soil. Located off a rutted, cratered part of the desolated national road that leads into the Grand’Anse, one of Haiti’s 10 geographical departments on the southwest coast, the construction site was an oddity. Even though shiny new metal roofs dot the region’s once-again-green landscape, most homes remain in disrepair, their occupants shuttered in deeper misery, their only economic activity the making of charcoal.

Proud that his pre-Matthew earnings had enabled him to school six children, Francois said he only managed this school year because fees were waived. But with no such luck with upcoming final exams, he had no other choice, he said, but to seek out odd jobs in hopes of raising $4.

“The weather took everything,” he said. To make ends meet he had put up a piece of his property for sale but found no takers. “I’m fighting, but I’ve yet to have anyone from the government or mayor’s office come give me a hand.”

Late last month, President Jovenel Moïse declared a state of emergency for the storm-hit regions. Coming nearly nine months after Matthew, the June 30 presidential decree came one day before a caravan of excavators and other state-owned earth-moving equipment rolled out of the rice-growing Artibonite Valley to the south as part of Moïse’s ‘Caravan of Change’ initiative he launched after taking office on Feb. 7.

Some Haitians, like agricultural specialist Jean-Marie Pamphile, who has been helping Joseph clear her land so she can benefit from a Catholic Relief Services replanting program, have a lot of hope that the caravan, which arrived in the Grand’Anse Friday, can help bring much of the storm-ravaged land back to life.

The CRS program is paying $1 per cacao tree and 50 cents per banana tree (for as many as 100 of each tree) to get about 7,000 farmers to diversify their food and income, and expand their cacao gardens. But it requires an investment — money many don’t have.

“I should easily be able to recruit 117 people,” said Pamphile, who has been trying to enroll farmers in the CRS program. “But while a lot of people have offered up their names, they can’t plant because they don’t have the funds to prepare their land.”

Fisherman Recilhome St. Firmin, on the other hand, says he doesn’t have much faith in the caravan, which is getting some financial assistance from the Inter-American Development Bank but has been dismissed by critics as political cinema.

“There won’t be any change,” said St. Firmin, who lives on the coastal outskirts of Port Salut, about four hours south of the Grand’Anse.

Like many in Port Salut, which has gone from being a vibrant tourist town to a place seemingly devoid of life after losing more than a dozen of its hotels to Matthew, St. Firmin thought the hurricane’s deadly passage would bring an immediate injection of cash and reconstruction along the coast.

“I don’t think they’ve forgotten us,” he said of donors and the Haitian government. “I just think they aren’t concerned with us. If they were concerned about our well-being they would have been helping since Matthew passed. Nothing is impossible.”

Last month, the Haitian government released an ambitious $2.2 billion budget document. But while agriculture — Moïse’s key campaign platform — received a 43 percent boost, its proposed allocation is still $110 million less than the $249 million allocated for public works, according to an analysis Tuesday by Group Croissance, a Port-au-Prince economic think tank. One of the biggest beneficiaries of the budget: the Haitian parliament, with a 74 percent boost in its yearly allocation.

“When you look at this budget, the biggest question is how it will be financed,” said economist Rock André, a consultant for Group Croissance. He added that foreign aid has decreased to $3.8 million and Haiti has never collected $1.4 billion in expected revenues.

Before the storm shredded her coconut and breadfruit trees, Marie-Lucienne Duvert eked out a living selling wholesale to street merchants in Port-au-Prince. Since Matthew, she has had to become a market vendor herself, she said, spending three days a week at a market near her home in Morne La Source on the rural outskirts of Les Cayes.

She started the business with four high-interest loans totaling $1,100. After a heavy downpour ruined her merchandise, she had no other choice but to tap the funds to replace her eroded metal roof and upgrade her storm-damaged wood-frame house to rock construction.

“Nobody ever came by and offered any help,” she said. “When you have debt, there is no such thing as sleep.”

Koldo Echebarria, the Inter-American Development Bank’s Haiti representative, said the institution will reroute about $85 million of its funds to reconstruction efforts in the south. The money will fund road repairs, along with schools, water treatment plants and flood prevention. The bank is also supporting the government’s “Caravan of Change” initiative by supervising some of the work, and paying for gas and per diems on projects.

Echebarria said the IDB plans to finish the last 15 miles of the Les Cayes-Jérémie road. But the upgrades don’t necessarily put money in people’s pockets or translate into jobs.

“The situation is so dire that even if we fully disbursed the $85 million that we have committed to the South after the hurricane, there are still a lot of people in need, a lot of villages that were badly affected by the hurricane and need further investment,” he said. “We will need lots more resources.”

U.S. government officials acknowledge the need, while noting that the U.S. Agency for International Development is continuing to support recovery efforts with the over $100 million it provided during the emergency response.

On Thursday, the World Bank announced that it will provide $100 million to support reconstruction efforts after Matthew. The funds are to rehabilitate roads and bridges, strengthen the response of civil protection in the event of another disaster and fund health and cholera-fighting efforts. Some of the money is to also be used to support agricultural production in the most affected areas of the country.

Meanwhile, in the Grand’Anse, the government has sought to address the desperate situation by opening 70 “community restaurants,” said Silvestre Abraam Alexis, departmental director for the ministry of social affairs in the Grand’Anse.

“There are things that have been done, and there is a little progress,” he said. “Maybe the amount isn’t enough given the need.”

Alexis said the city of Jérémie alone boasts 16 restaurants, though he acknowledges that “some people are so vulnerable, that they cannot pay [the 16 cents a plate] and eat for free.”

“There needs to be cash that circulates in the community so that the people could start to resume their lives,” he said.

Back at her expansive farm, Joseph notes that she has already spent about $16 — money that should go into rebuilding her roofless home — on clearing her yard, and there is still plenty to be done.

“This is how I live; I don’t have a husband, all I have are my fruits and vegetable trees,” she said, walking to the edge of the property to survey a small garden she planted in March.

Turning to her field of debris, Joseph recalls her once majestic coconut palms.

“I am going to replant,” she says, determination in her voice. “Even if I don’t get to taste one, those who I leave behind will.”