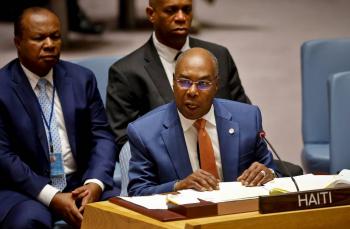 Two months after a fuel price hike sparked widespread violence in Haiti, the country’s top diplomat at the United Nations told the international community Thursday that “the crisis has been overcome.”

“These events, undeniably an expression of public frustration in the face of social and economic difficulties, have certainly been a major test for the country,” Haiti’s U.N. Ambassador Denis Regis said during a gathering of the United Nations Security Council. The council met to assess the situation in Haiti, where it still has a small peacekeeping mission — the United Nations Mission for Justice Support in Haiti or MINUJUSTH — focused on justice, human rights and police development.

“The country has taken a difficult challenge, no one can deny it. But the crisis has been overcome,” Regis said. “The state’s authority is now restored, and civil peace is maintained. ”

Regis’ optimistic outlook stood in sharp contrast to the cloud of uncertainty in Port-au-Prince, where opposition lawmakers and some supporters of President Jovenel Moïse were balking at the composition of the proposed government of nominated Prime Minister Jean Henry Céant.

A former presidential candidate and well-heeled public notary, Céant was tapped last month to replace outgoing Prime Minister Jack Guy Lafontant after Lafontant and his cabinet were forced to resign because of their poor handling of the fuel hike. At least eight people died including two Haitian police officers. U.S. airlines canceled flights and businesses were looted and burned.

On Thursday, several Haitian lawmakers said despite Regis’ positive portrayal to foreign diplomats, the country remains in crisis mode. Tensions have been evident in an anti-corruption social media campaign over missing funds from Venezuela’s Petrocaribe discounted oil program. Haitians are using the campaign to demand accountability of current and past government officials.

“This new government, in its current form, is a slap in the face of the Congress, which voted against it in July and even in the face of the newly appointed prime minister who has not been allowed to choose even two members of the cabinet, according to credible sources,” said Deputy Jerry Tardieu, a member of the Lower Chamber of Deputies who was among the first to publicly ask for Lafontant and his cabinet to step down.

If Céant is ratified, Tardieu said, “he will have all the difficulties in the world to properly lead this government. We are not yet out of the crisis.”

With the vote on Céant’s government program still pending in both the Senate and the Lower Chamber, it’s unclear whether Haiti will get a functioning government before deputies go on their three-month recess at midnight Monday.

Deputy Deus Deronneth said if the proposed government remains unchanged, there is “a more than a 70 percent chance” his bloc of 16 opposition deputies will not vote in favor of ratification.

Prior to the gas riots, the group of 16 accused Lafontant of government corruption, inefficiency and violation of the Constitution after four of the five ministers he appointed in an April cabinet reshuffle failed to have the proper financial clearance to serve as required by the Constitution. Their move — and a report by a the Superior Court of Auditors and Administration Disputes confirming that ministers lacked the proper certificates —helped precipitate the Lafontant government’s downfall.

Of the 18 members in Céant’s proposed cabinet, six were in Lafontant’s defunct government and three are among those whose eligibility have been questioned.

“The ministerial cabinet that was published last night is a provocation and a plot against the nation,” Deronneth told Magik9 radio station in Port-au-Prince. He noted that Moïse and Céant, who once paid a New York-based firm $5,000 a month to introduce him to key people in the United States, owe it to the nation to heed the lessons of July 6-8 and “look at the reality and the situation of the population, and the impatience of the population while they are trying to better understand how their tax dollars are being managed.”

“A new government ... should create a renewed momentum in our partnership with Haiti, the strength of which is essential to the achievement of our transition targets,” Keita said. She introduced the newly appointed head of the U.N. mission and Special Representative of the Secretary-General for Haiti, Helen La Lime. Lime heads to Haiti next week.

Keita called on Haitian authorities to address the root causes of the precarious social conditions that led to the civil unrest, and said that several challenges remained to spur progress ahead of October 2019, when the U.N. is hoping to transition to a non-peacekeeping presence in the country.

Several of those challenges were highlighted during the hearing by diplomats, including U.S. Ambassador Jonathan Cohen, and in U.N. Secretary-General António Guterres’ report to the Security Council on the situation in Haiti.

In his report, Guterres noted that the government’s announcement that it would remove fuel subsidies and raise the price of fuel by as much as 51 percent tested Haiti’s fragile political stability. The report noted that inflation, which reached 14 percent at the end of May, remains a problem.

Haiti, the report said, is “unlikely” to achieve its projected economic growth of 1.8 percent this year, from 1.2 percent in 2017. The country, especially the Port-au-Prince metropolitan area, is facing an increase in gang activity, despite the fact that homicides have remained constant compared to the same period lat year, and lynchings are on the decline. The increased gang violence, the report said, is “severely testing national police efforts to contain its expansion in the southern districts of Port-au-Prince.”

Cohen, who serves as deputy permanent representative to the United Nations, said it was important for Haiti to protect the gains it has made with its police and the government must do more to combat corruption and strengthen the judiciary.

“It’s imperative that corrupt officials or any other individuals implicated in human rights violations be held accountable for their actions,” he said. “We must also caution against the politicization of the police. The government of Haiti must prioritize the continued development and professionalization of its national police and ensure the institution remains apolitical.”