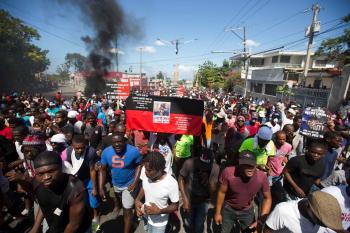 Ongoing protests are roiling Haiti, as demonstrators take to the streets to demand President Jovenel Moïse’s resignation due to government corruption and mismanagement of the country’s oil fund. The protests began in July, but Moïse is facing further scrutiny after five heavily armed Americans were arrested last month near Haiti’s central bank in Port-au-Prince with a cache of weapons, claiming to be on a “government mission.”

The mercenaries were quickly sent back to the United States without facing criminal charges in Haiti, sparking outrage and mounting demands that the government explain why the men had been at the central bank in the first place. An explosive new investigation by Haiti Liberté and The Intercept has found that the mercenaries were at the central bank on a mission ordered directly by the embattled Haitian president.

Their goal was to escort a presidential aide to the Haitian central bank as he transferred $80 million from the government’s oil account to another account controlled by Moïse. This news comes as Haiti’s Parliament has thrown out Prime Minister Jean Henry Céant in a no-confidence vote. We speak with Kim Ives, an editor of Haiti Liberté and co-author of the new joint investigation with The Intercept.