Behind the Covid Numbers in Haiti 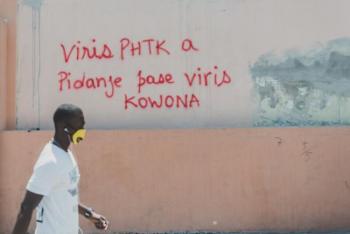 The official Covid-19 death toll in Haiti stood at only 54 as of June 7, with 3,538 confirmed cases. But the numbers don't tell the story.

The virus is now in all 10 departments, and medical authorities—organizations like the World Health Organization and Doctors Without Borders—warn that the country's few Covid-ready hospitals and triage centers may soon be overwhelmed. Police officers and doctors have died. Children have died. The disease has reached the country's overcrowded prisons.

Many thousands of Haitians have likely already had Covid. In the village of Cayes-Jacmel, nearly every family has had someone ill with the symptoms. In the capital, 90 percent of those tested are Covid-positive.

But lack of, and fear of, testing mean that thousands go undiagnosed and that hundreds, or perhaps even more, have died—untested and uncounted—due to a combination of factors that are as much political and economic as they are related to the weak public health system.

But as important? Distrust in the discredited government.

One recent afternoon, Solange Pétion, 58, was in her usual spot next to a lottery stand not far from the National Palace, trying to sell hot coffee, hot chocolate, and bread. Even though the government asked people to stay home and threatened those without masks with a fine of $300—about half a year's income for more than half the population—most are maskless.

"If that sickness was really in Haiti, it would have already killed many people," she said.

Not far away, Charles, who would not reveal his last name, was trying to sell new and used books to students milling about, even though the government shuttered all schools and universities.

"Yes, I've heard it's in other countries, but here in Haiti, everybody lies. I don't trust the government," he said.

And so no wonder that protestors have scrawled graffiti like "Where is the Corona money?" on walls, mimicking the slogan from the past two years' anti-government anti-corruption protests: "Where is the Petrocaribe money?"

People like Charles believe rumors that say Covid-19 is a fiction invented by President Jovenel Moïse—repeatedly and credibly accused of corruption and now ruling by decree since January because elections for lawmakers were not held—so that he and his cronies can attract financial aid from abroad. They also do not trust international humanitarian actors, whose repeated promises in the wake of the 2010 earthquake did not deliver the promised Haiti "built back better."

And in any case, the vast majority of Haitians—trying to eke out a living as farmers or working in the informal sector—cannot afford to stay at home or to follow the other impossible rules laid out in a May 21 presidential decree, like the daily disinfection of tap-taps, the pick-ups used for mass transit.

Thus, pandemic or not, almost all of the country's 11 million people are out and about. And so, across the country, people are sick and dying of what they call the "epidemi lafyèv" (fever epidemic).

"Some have all symptoms, but most have a very mild disease," explained Jean William (Bill) Pape, M.D., executive director of the GHESKIO Centers, on June 2.

A renowned public health doctor and Weill Cornell Medical College professor, Pape has worked for years on HIV-AIDS and TB in Haiti and today co-heads the commission overseeing Haiti's COVID fight, the Multisectoral Pandemic Management Commission COVID-19, with the Minister of Health.

"This is indeed COVID 19!" Pape noted, although most people are not tested, "When they have the mild form, they think that it is a cold. As they need to work daily and are used to hardship, so they resume their activity. This way they are likely to transmit the virus."

Because they fear being stigmatized or forced to quarantine, scores are not seeking medical assistance. In some communities, people have attacked or ostracized those who are sick.

Another problem are the religious leaders—especially Evangelical preachers—who have said the disease does not exist and that "if we rely on Jesus Christ,we have nothing to worry about," Pape said, adding: "In fact today, one of those preachers, unfortunately, died."

A Plan, But Little Cash

The government commission is working on fighting the disinformation, Pape noted, as part of its $176 million Covid attack plan, which includes establishing 30 Covid-ready centers or wards with a total of 300,000 "Covid beds" equipped with an oxygen supply.

But as of June 3, the country had only about 450 beds for a population of over 11 million, and the plan remains mostly unfunded, according to Paul Auxila, the commission's controller.

The government spent $20 million on material and the private sector donated $3.5 million, Auxila said, but aside from a World Bank pledge of $20 million, Haiti's usual donors have not stepped up with funding. Meanwhile, the World Bank money hasn’t arrived yet.

While UNICEF and other UN agencies, nonprofits such as Doctors Without Borders, and various bilateral and multilateral partners such as CARICOM and the French government have sent materials or provide administrative support, Auxila stressed that Haiti needs cash.

"If everything goes well, [pledges] will arrive in 8 to 10 weeks," Auxila explained in a recent webinar. "I hope that we will not need it by then because by then we will have been successful or everybody's dead."

The establishment of a Haitian-led commission to oversee aid efforts is an advance over previous disasters.

During the 2010 earthquake, scores of church groups, charities, nonprofits, and bilateral agencies operated all over the country, often with little oversight or coordination, earning Haiti the nickname: "The Republic of NGOs." The ineffectiveness of international NGOs frequently draws criticism from academics, politicians and local organizations.

In fact, Haiti's health system today is a jumble of several large nonprofits like the GHESKIO Centers and Partners in Health (PIH), private clinics, and poorly funded and staffed public facilities.

It is no surprise the commission has to beg for donations.

A recent World Bank study notes that government funding for healthcare in 2014 stood at only $13 per person, compared with $336 per person in Latin America and the Caribbean.

"Domestic financing as a share of total health spending has been steadily decreasing since the 1990s," the report notes.

What the report does not point out is why that number has decreased.

Since the 1980s, Washington and the multilaterals have forced successive Haitian governments to apply neoliberal "structural adjustment policies," which have often involved cutting public funding. Nonprofits have stepped in for the impoverished, and Haiti's elite usually just head to Florida, France, or Cuba for their care.

In a May 16 analysis of the pandemic, the director of the Haitian Platform for an Alternative Development Camille Chalmers wrote that the country has been "dragged down by a wave of privatization and unprecedented commodification of our public services that led to the collapse of our public healthcare system."

Doctors and nurses lucky enough to work at PIH's Mirebalais University Hospital, which opened its Covid ward in March, have protective gear, but the same is not true at some of the state facilities where some doctors and nurses have refused to come to work due to a lack of equipment and news of sick colleagues.

The government ombudsman recently denounced the lack of protection for doctors at the capital's largest hospital resulting in "nearly empty hallways."

Deportations by the U.S. Immigration and Customs Enforcement agency have also added to the spread of the disease.

Jake Johnston of the Center for Economic and Policy Research has counted eight ICE flights to Haiti since the outbreak, many of them with Covid-positive deportees aboard. The government has been able to quarantine some of them, but at least one man escaped his hotel room.

U.S. congresswoman Frederica Wilson (D-FL) is cosponsoring a bill calling for temporary halt to the flights. Still, speaking in an online meeting with Wilson and others on May 29, Johnston noted that advocates should focus also on the root causes of migration, including "decades of failed aid policies" and "billions in aid [that] have borne little fruit on the ground."

Another source of spread comes from the neighboring Dominican Republic, which had almost 20,000 cases and over 500 deaths as of June 7.

Even though the border is officially closed, people still move back and forth for work, commerce, or because they have family in both countries. Almost 160,000 people entered Haiti from the Dominican Republic between March 17 and May 31 according to the UN migration agency, some forcibly deported and others returning voluntarily because they lost their jobs due to the pandemic. During that same period, Haitians crossed into the Dominican Republic at least 100,000 times, with thousands more likely crossing unofficially.

PIH is testing those at the border who give consent, but not everyone does.

Disaster for the people, good for the government?

Officials predict the pandemic could kill up to 20,000 Haitians, but do those numbers also take into account people who will die from hunger, or from inability to pay for drinking water or transportation to the market?

Haitians outside of Haiti are the reason many people inside the country survive. A 2017 report estimated that remittances account for about one-third of the nation's GDP, contributing over $3 billion in 2019.

But because of the pandemic, remittances are already down by 30 percent, according to Pape. (The World Bank predicts they will fall by 20 percent.)

That decline in hard currency, the drop in tourism and interruption of supply chains have  added to the country's economic tailspin. Continued double-digit inflation has caused the prices of essentials to skyrocket, further impoverishing the population, half of whom have no access to potable water and adequate sanitation and where one in three people need food aid.

Prior to the pandemic, Haitians in the streets, and also in the board rooms, were increasingly frustrated with the president, now ruling without a parliament.

"The virus ended the discussions on the legitimacy of the de facto government," noted a platform bringing together the country's main peasant movements, as well as five Left parties and organizations, the Papaye Patriotic Platform (PPP).

Moïse's pandemic decree also sets a curfew and says people are not allowed to meet in groups of more than five. Many, including the director of the Haitian Platform of Human Rights Organizations, say the Moise government is taking advantage of the virus to quell dissent and mobilization.

To raise awareness, PPP member organizations are launching "Solidarity Committees" in the packed urban neighborhoods and in the countryside in order to educate and raise awareness.

Doctors, teachers, and traditional healers affiliated with the movement have already held conferences and seminars in several of the countries’ 10 departments.

"Our struggle to work with the people to protect everyone from the coronavirus cannot be done without linking it to the political struggle," the PPP said, "to get rid of the government and to work to change the country."

Jane Regan is award-winning investigative journalist, documentary filmmaker, and community and alternative media scholar. She co-launched and then served as coordinator and executive editor of three community- and student-based newsrooms: one in Somerville, Mass., and two in Haiti, where she lived and worked for almost half of her 35-year career. She has held full-time teaching positions at Salem State University and Boston University and has also worked for numerous outlets including PBS, BBC, Miami Herald, Associated Press, Reuters, Latinamerica Press and Inter Press Service. Regan was the co-recipient of NACLA's Samuel Chavkin Prize for Integrity in Latin American Journalism in 2004. http://www.janevregan.org.