BRH finally publishes an accounting of the reviled $1.50 tax on international money transfers 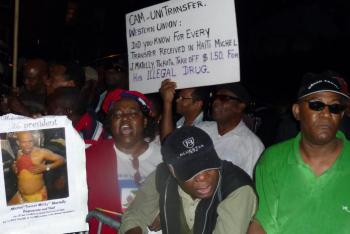 A Haitian demonstration against Michel Martelly at Brooklyn College on Sep. 26, 2012. Haitians, particularly in the diaspora, have demanded an accounting of and an end to the $1.50 tax on international money transfers illegally imposed since 2011. Credit: Kim Ives/Haiti Liberté

At long last, Haiti’s central bank, the Bank of the Republic of Haiti (BRH), has published a report on the revenues collected by a much despised tax of $1.50 on most international money transfers to (or even from) Haiti over the past seven years.

The accounting has been a perennial demand of analysts and demonstrators for years, ever since the fee was unilaterally and illegally imposed by the government of President Michel Martelly and Prime Minister Laurent Lamothe in 2011.

Expatriate Haitians annually send some $2 billion in remittances back to their family and friends in Haiti, making it the country’s largest income source.

Since July 2011, the Haitian government has also imposed a tax of $.05 on every international phone call to or from Haiti, although such calls have dramatically decreased with the advent of free calling via Whatsapp, Imo, Facetime, and other internet applications in recent years.

The report, released this week, comes out as an international movement demanding transparency on the use of billions of dollars from Haiti’s PetroCaribe Fund continues to rage.