Canada abandons the people of Honduras 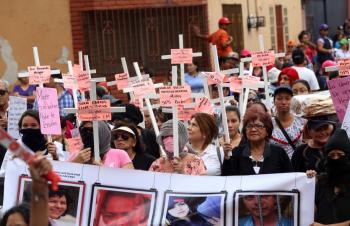 Recognizing Juan Orlando Hernández as the Honduran president, Canada places the interests of a few Canadian transnational corporations above the rights of the Honduran population, say the authors. Photo: Orlando Sierra Agence France-Presse

* A list of organizations who have signed the following statement is available below.

On 27 January, Conservative Juan Orlando Hernández will be sworn in for a second term as President of Honduras, ending a long electoral process marked by allegations of fraud, and serious violence against citizens, directed at the dictatorship. Canada's support for the regime and its validation of election results - which the Organization of American States (OAS) has even criticized - are deeply troubling and represent another setback for democracy and human rights in the region.

The day after the presidential elections of November 26, 2017 in Honduras, the Supreme Electoral Tribunal published preliminary results. With close to 60 percent of the vote counted, opposition candidate Salvador Nasralla was five points ahead of outgoing President Hernández of the far-right National Party. The TSE remained silent for 36 hours, causing many Hondurans to fear the election was stolen. The Hernández government imposed a dusk-to-dawn curfew and ordered police and military forces to crush anti-fraud protests across the country. When the court finally resumed reporting on the election results, Nasralla's advance had suddenly disappeared and now gave Hernández the lead.

In the next three weeks, until December 17, when the TSE proclaimed the victory of Hernández, more than 30 anti-fraud demonstrators were killed in the streets, dozens of people were injured and more than 800 were detained arbitrarily. Honduran human rights organizations have expressed concern over the re-emergence of death squads, enforced disappearances and torture of demonstrators arrested and charged with serious crimes, including "terrorism", for participating in demonstrations violent.

Given the irregularities noted during its election observation mission, the Organization of American States has called for new elections. However, the Canadian government ignored the violence and reports of international observers, and quietly followed his American counterpart, expressing Canada's support for Juan Orlando Hernández in a Twitter message a few days before Christmas.

One of the most violent in the world

Since the coup in 2009, Honduras has become one of the most violent countries in the world, with high rates of murder, insecurity and impunity . Elections held after 2009 - all won by the National Party - were also approved by the Canadian government, despite numerous allegations of violence and irregularities in the electoral process reported by Honduran and international observers.

The Harper government took advantage of the democratic breakdown and deteriorating conditions in Honduras to advance economic interests - for example, by facilitating a redesign of the Honduran mining code for Canadian extractive transnationals and becoming the first country to sign a treaty. free trade agreement with the post-coup regime in Honduras.

In the run-up to Juan Orlando Hernández's inauguration, the crackdown on pro-democracy militants continues. A broad coalition of civil society organizations demands the end of repression, a national dialogue with broad representation and the removal of the de facto president . Beyond partisan politics, a majority of the Honduran population is outraged by the outright theft of the election they witnessed, adding to instability for years to come.

By recognizing Juan Orlando Hernández as the Honduran president, the Liberal government promotes human rights abuses and places the interests of a few Canadian transnational corporations above the rights of the Honduran people and the stability of the region.

* This text is signed by the following 25 organizations:

Translated from French by Travis Ross