Canada considers donating arms to Ukraine, one of the world’s top arms exporters 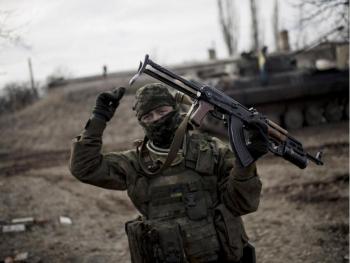 A Ukrainian soldier gestures as he guards territory near Debaltseve, eastern Ukraine on Sunday, Feb. 8, 2015. EVGENIY MALOLETKA/ THE ASSOCIATED PRESS

Global Affairs Canada is still deciding what to do with the small arms, mortars and other equipment that Canada was supposed to provide to Kurdish forces.

That initiative got derailed after the Kurds pushed ahead with efforts to break away from Iraq and the Iraqi government declined to give Canada permission to deliver the equipment.

Now GAC is considering whether to ship the equipment to Ukraine’s security forces.

Conservative defence critic James Bezan, who was involved in previous initiatives under the Conservative government to provide Ukraine with equipment from Canadian Forces warehouses, is all for the providing the gear, originally purchased for the Kurds to Ukraine. Canada has already donated some stocks of military equipment to Ukraine. In August 2014, Canada supplied 30,000 pairs of ballistic eyewear, 2,300 bullet-proof vests, 350 first aid kits, 7,000 helmets, 735 sleeping bags and 100 tents. In November 2014 Canada announced another shipment from Canadian Forces stocks, including 30,000 coats, 30,000 pairs of pants, 70,000 pairs of boots and 4,500 pairs of gloves. The Canadian government spent $1.6 million to ship $5 million worth of equipment, according to figures obtained by the Ottawa Citizen.

There is support in some quarters of the federal government to ship the equipment to Ukraine.

But there are others who are arguing against that. They point out that such a move – providing small arms free of charge to Ukraine – would undercut Colt Canada, which is in the midst of a marketing effort to interest that country to purchase similar weapons.

Then there is the political optics of providing Ukraine with free military equipment. Ukraine exports more arms than Canada.

It is ranked at the 11th largest arms exporter in the world while Canada is ranked as 16th, according to the latest data published by the Stockholm International Peace Research Institute (SIPRI) in March 2018. Ukraine has stopped its exports to its largest customer, Russia, but is still has customers in China and other Asian nations.

Ukraine’s government wants to significantly increase its arms exports and has stated that its plan is to become the 5th largest arms exporter in the world.

Before fighting began with Russian-backed rebels, Ukraine was selling large amounts of small arms and other gear. But much of its arms exports today is of the larger type of equipment – armoured vehicles, tanks, aircraft, aircraft engines, etc.

There is no indication of when Canada will make a decision on what to do with the arms purchased for the Kurds.