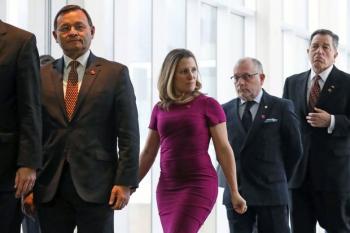 Bloody Canada: Cheerleading the Lima Group’s Plot to Overthrow the Government of Venezuela

Guaido’s party Voluntad Popular (VP), is the most violent and right wing opposition party in Venezuela. One of its leaders, Maria Corina Machado was interviewed on the public Canadian Broadcasting Company (CBC) on Feb. 1. She has openly, repeatedly, shamelessly and in front of numerous TV and radio cameras, urged mobs to violence and she has most recently publicly threatened the life of President Maduro.  She has also been invited to speak with Ottawa politicians.

Guaidó and his party carried out the terrible street violence of 2014, which they named “La Salida” (The Exit). It resulted in 114 innocent people being killed. Several young men were burned alive suspected of being “Chavistas”. This was the worst street violence ever seen on the streets of Venezuela. The leader of the party, Leopoldo López was jailed, after a long and fair trial with the best lawyers money can buy, sentenced for his responsibility for unleashing this terror and the ensuing 114 deaths.

Federal NDP Leader Jagmeet Singh caused further confusion about his party’s position on Venezuela when he refused to say who he recognizes as the country’s president — putting him out of line with his own foreign affairs critic.

On Tuesday, amid ongoing public pressure, Helene Laverdiere had offered the clearest position from the party yet and tried to distance the NDP from Canadian labour groups who appear sympathetic to authoritarian President Nicolas Maduro.

Laverdiere told the National Post that she speaks for her party when she says she’s “comfortable” with Canada recognizing a new interim president in Juan Guaido.

But at a campaign stop in British Columbia, where he is running in a byelection to gain a seat in the House of Commons, Singh fell back on an earlier, murkier statement on Wednesday, saying, “any decision about the future of Venezuela should be in the hands of Venezuelan people.”

The coup in Venezuela, explained (Video)

As crisis engulfs Venezuela, Aaron Bastani looks at the political and economic history of the country since Hugo Chavez won power in 1998. His conclusion? That sanctions and oil prices are to blame for the country's economic plight, while it boasts a far greater tradition of democracy than critics often realise let alone dare to admit.

Canada’s leadership on Venezuela is misguided, misdirected – and a mistake

Given the crisis in Venezuela, this attempt at “democracy promotion," as Foreign Affairs Minister Chrystia Freeland calls it, may seem admirable. But it has little to do with democracy, and more to do with installing a government more to our liking – and may lead to violence, or even civil war.

The actual situation in Venezuela is more complicated than the headlines suggest. In 2018, despite escalating crises – and even accounting for electoral irregularities and an opposition boycott – 5.8 million Venezuelans still voted for Mr. Maduro. So he is not completely without popular support. He also still has the backing of the country’s powerful army.

Mr. Guaido, a heretofore little-known legislator who was elected only in his own district, also offers no guarantee of stability. The only salient detail for Ottawa in support of his claim is that he has the support of a majority of the 164-member national assembly, which elected him its president.

Meanwhile, some Lima Group members are being willfully hypocritical in their moralizing. Guatemala’s President, Jimmy Morales, dismantled a United Nations anti-corruption group and barred its head from entering the country. Honduras’s President, Juan Orlando Hernandez, took power in 2014 after a dubious election and violent crackdown on dissent, then ignored his country’s constitution to win re-election in 2017. Brazil’s new President, Jair Bolsonaro, has not only publicly attacked women, gay people, immigrants and people of colour, he has also expressed support for torture and his country’s military dictatorship. Colombia has witnessed the execution of 120 human-rights leaders in the past two years.

Is Ms. Freeland promoting democracy in those countries? And what does it say about Canada that these are our fellow travellers?

The Lima Group met in Ottawa and signed the Ottawa Declaration to oust President Maduro from power in Venezuela. 13 conservative Latin American governments, plus Canada, officially recognized Juan Guaido as the transitional President of Venezuela and accepted Venezuela’s membership to the Lima Group. Yves Engler, Dimitri Lascaris, and Greg Wilpert discuss the outcome.

Organized labour lines up against Canada's stance on Venezuela

Organized labour in Canada is voicing its opposition to the federal government's decision to embrace Venezuelan opposition leader Juan Guaido over the regime of Nicolas Maduro — which has been accused of human rights abuses and of winning the last election through vote-rigging.

It's imperative to note, however, that contrary to what Freeland claims, Guaido's declaration violates Venezuela's Constitution. According to the document, defined by its radical mechanisms that ensure power rests largely in democratically-elected popular institutions such as communes, for instance, the nation's president must first be deemed unfit or absent to carry out his or her duties before someone else can legally assume the presidency. Section 233 outlines all the ways, including death, resignation or mental incapacity, to name just a few, that a president can be deemed unfit. As such, a very alive, mentally aware and democratically-elected Maduro candidly, and with the infectious humor Venezuelans are known for, pointed out during a televised Jan. 24 speech: “Estoy vivo, gracias a Dios y seguiré vivo por muchos años….y estoy bien del coco...y más duro que nunca.” (I’m alive, thank God, and will be for many years to come... My mind is still clear… and I’m going harder than ever.)

“An overt military coup would be dangerous and unwelcome, but one could imagine the military retiring their support from Maduro, thereby, creating the opportunity for a pluralistic interim government leading to internationally monitored elections in which there would be a role for the forces of chavismo, and an opportunity for those who have committed crimes to avail themselves of amnesty. That is probably the best possible outcome. The alternatives are more repression, a costly stalemate or a breakdown of order and civil war."

Traditional supporters of Maduro argue that this is another attempt at a coup orchestrated by the U.S. government, just as they charge that the failed 2002 coup to remove Chavez was also an American plot. The coup lasted less than 48 hours when Venezuelans stormed the capital and demanded that Chavez be reinstated. The Trump administration has been very vocal in its support of Guaido and has continued to exert economic pressure on the nation.

Moderate Rebels episode 33 (part 1/2): Max Blumenthal and Ben Norton speak with Professor Steve Ellner about Venezuela's right-wing opposition, and how the corporate media whitewashes its use of violence and economic sabotage. Ellner explains some of the economic problems faced by President Nicolás Maduro, including manipulation of exchange rates and low oil prices.

The Canadian government denied media outlets, like teleSUR, whose mission it is to provide news from the Global South, from covering the latest self-styled Lima Group meeting that will take place in Ottawa, Canada’s capital.

The government did not provide any reasoning for the denial of Lima Group meeting access, but has recently been called out for limiting press freedom within the country based on the preferences of its government. Their message read, "Thank you for your interesting in the 10th ministerial meeting of Lima Group in Ottawa. This email is to let you know you have NOT been accredited as media."

The Trump administration’s attempt to force out the president of Venezuela marked the opening of a new strategy to exert greater U.S. influence over Latin America, according to administration officials.

In sight isn’t just Venezuela’s Nicolás Maduro, but also Cuba, an antagonist that has dominated American attention in the region for more than 50 years, as well as recent inroads made by Russia, China and Iran.