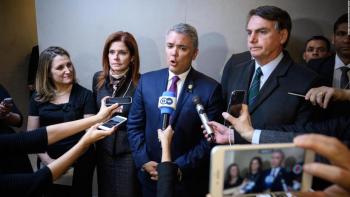 It's not at all surprising that Justin Trudeau and Chrystia Freeland have conveniently forgotten when, several decades ago, top Canadian politicians - including Trudeau's late father, Pierre - were livid after a foreign head of state stuck his big, signature nose into Canada's tricky, delicate business, as they go about sticking their pretty, petite noses into Venezuela's tricky, delicate business.

This amnesia is, of course, de rigueur among Western political dilettantes whose diplomatic modus operandi still reflects a grating, colonial-like attitude that dictates to "developing" countries - there's one set of international rules for us, and quite another set for you. So, take heed, rather than suffer the potentially brutish consequences.

What should the leader of Canada’s left wing party say about what’s happening in Venezuela? Here are a few suggestions: “Canada should respect international law in its dealings with Venezuela.” Or, “Canada shouldn’t select the president of Venezuela.” How about, “The US has a long history of overthrowing governments in Latin America and Canada should never take part.”

Any (or all) of these statements would be clear, reasonable positions for a social democratic party that claims to be in favour of international law and to represent the interests of ordinary people, rather than billionaires, to express. Instead, NDP leader Jagmeet Singh has issued vague, contradictory words about the Liberal government’s aggressive effort to topple Venezuela’s elected president.

Foreign Minister Chrystia Freeland said Monday that Canada and members of the Lima Group are calling on the Venezuelan military to recognize the National Assembly and Juan Guaido as the interim government of the country.

Moderate Rebels episode 34 (part 2/2): Max Blumenthal and Ben Norton continue speaking with scholar Steve Ellner about the economic war on Venezuela and the devastating impact of US sanctions. While the Trump administration pushes for a coup against President Nicolas Maduro, Ellner addresses the falsehoods of "leftist" opposition to Chavismo, the geopolitics of the Pink Tide and the role of China and Russia, and the sabotage of the BRICS system.

They’ll tell you this about restoring “democracy” and “human rights” in the South American country. But one look at the administration officials driving the putsch perishes the thought.

Take Secretary of State Mike Pompeo, who recently spoke at the United Nations calling on countries to stand “with the forces of freedom” against “the mayhem” of Venezuela’s government.

This fall, the same Pompeo shared a photo of himself beaming and shaking hands with Saudi Arabia’s crown prince — just as the prince’s order to kill and dismember a U.S. resident journalist was coming to light. The same prince is carrying on a U.S.-backed war in Yemen, where millions are starving.

Does this sound like a man who gives one fig for democracy, or against mayhem?

RJ Eskow interviews Max Blumenthal on the crisis in Venezuela. Max Blumenthal in an investigative journalist, co-founder of the Gray Zone Project, and co-host of the Moderate Rebels YouTube channel.

A military coup in Venezuela? Not without the military’s support

The intensification in political discourse and geopolitical pressure since the beginning of the new year will only worsen economic instability and cause a spike in migration. Barring military intervention organized by the United States and its allies, diplomatic pressure seems useless to take down Maduro. But the key element, the Armed Forces, seem to remain loyal to Maduro, making an internal military coup unlikely.

The probable outcomes range from a military intervention led by the United States in alliance with Colombia and Brazil to a prolonged stay in power for Maduro to the possibility of a Russian and Chinese intervention or a military coup. In the following text, we will analyze each of these potential outcomes.

Ear To The Ground Podcast #10: Venezuela Under Siege

Jeanette Charles speaks with VA's Venezuela‐based writers and reporters Cira Pasqual Marquina, Paul Dobson and Lucas Koerner about the US's strategy, from its warmongering discourse to the expanded sanctions. In the podcast, the on‐the‐ground staff also discusses life in the streets of Caracas and Merida, and the popular movement's response to the current crisis.

The history - and hypocrisy - of US meddling in Venezuela

Trump’s latest moves, recognizing Venezuela’s illegitimate would-be presidential usurper Juan Guaido and appointing the neoconservative regime change hawk Elliott Abrams as special envoy, seems designed to sow seeds of subversion and revolt within the country’s government and military. This follows National Security Adviser John Bolton — a key neocon architect and cheerleader for the 2003 invasion of Iraq and who has also advocated regime change in Iran, Venezuela and elsewhere — calling Venezuela, Cuba and Nicaragua a “troika of tyranny,” a hypocritical characterization reminiscent of Bush’s “axis of evil,” and one that utterly ignores the far worse, but far more subservient, regimes backed by the Trump administration.

The United States has almost always opposed — whether by slaughter, spies or sanctions — any government or movement that seeks to freely choose its own political and economic path if it diverges from the corporate capitalist order backed by Washington and Wall Street. It has long sought to crush the boldly defiant Bolivarian Revolution, just as it has crushed countless popular revolutions and movements before. The Maduro regime is far from perfect. But to call Maduro a dictator and to advocate regime change in Caracas while supporting far worse tyrants around the world just because they’re U.S.-friendly is an exercise in the blatant, bloody hypocrisy for which the United States has long been infamous around the planet, especially among its poorer parts and peoples.