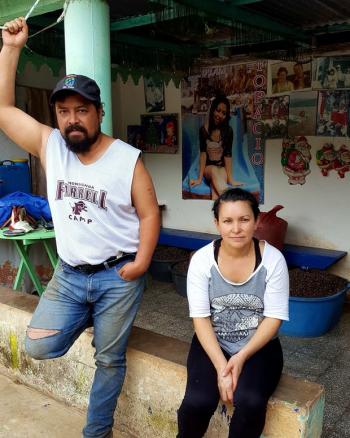 Alex Reynoso and his wife Irma sit in front of a montage of their daughter Topocio, who was shot dead in 2014 when she was 16. Alex survived the attack. Photograph: Nina Lakhani

Deep underground, buried in the lush hills of southern Guatemala, lies a veritable treasure trove: silver, tonnes of it, one of the largest deposits in the world.

But it’s above ground where the really dangerous activity goes on. On a dusty highway, about 50 peasant farmers stand praying in a circle, a makeshift roadblock intended to stop trucks reaching the mine. They have already been violently dispersed by police teargas. Now they fear the army might move in.

The contrast couldn’t be greater: the mine extracted more than $350m (£270m) worth of silver last year. The protesters, men, women and children turning out for 12-hour vigils, eke out a living by farming coffee, maize and small herds of cattle.

This is a perennial frontline in a deadly battle fought by land rights activists against corporate interests in Guatemala, a clash of interests that have made the country one of the most perilous places in the world for environmentalists, according to the NGO Global Witness.

Since 2010 at least 41 people have been killed – including eight at the Canadian-owned mine, Escobal.

Though a handful of hitmen have been prosecuted in connection with the killings, none of the masterminds has been detained.

Some argue that the current pattern of oppression has links to Guatemala’s unresolved past. During the civil war, forced disappearances and extrajudicial killings were used to subjugate poor rural communities in order to preserve land rights for the elites.

Now, says Ramón Cadena Rámila, Central America director of the International Commission of Jurists, the repression is more subtle but the end results are similar: rural communities forced to defend their land.

“The three organs of the state – the courts, congress and executive branch – work together to authorise forced evictions, states of siege, false charges and arbitrary detention in order to generate terror and kill rebellion in communities opposed to extractive industries,” said Cadena.

There are currently at least 307 active mining licences in Guatemala, mainly in rural indigenous regions, according to Ministry of Energy and Mines (MEM) figures. Almost 600 more are under consideration. At least 32 hydroelectric dams are operational, with dozens more under construction or assessment.

Against that, about two million people have participated in plebiscites since 2010, voting overwhelmingly against environmentally destructive projects such as mines, logging and dams. Their voices have been largely ignored.

The pattern of repression linked to the Escobal mine, situated 40 miles south-east of the capital Guatemala City, provides an insight into the murky world of extractive industries in the country.

The deep mine, which was acquired by Canadian company Tahoe Resources in 2010, is thought to hold the third biggest silver deposit in the world. But it is situated in the middle of Guatemala’s southern agricultural heartlands where thousands of families live off the land.

Tahoe was granted a 25-year licence to exploit a 20 sq km area in San Rafael las Flores – almost a quarter of the municipality’s territory – in April 2013 despite numerous community votes against the mine.

Its environmental impact study (EIA) was flawed and should not have been approved, according to independent experts, whose assessment Tahoe rejects. The company insists all its licences were obtained legally, and that most community members support the mine.

Days after the Escobal license was granted, seven protesters were shot outside the mine. Luis Fernando Monroy, now 23, was shot three times at close range in the face, leaving him with permanent loss of smell and breathing complications.

Fernando, who leads a youth environmental group, refuses to cower despite a regular stream of abusive, defamatory and threatening messages via social networks and WhatsApp. Thugs have threatened his family at their home; his younger siblings were forced to abandon school.

“The harassment is constant, the fear is there, but I will resist until death. We have a right to a healthy environment and clean water; this is a struggle for life,” Fernando told the Guardian.

Efforts to pursue the man accused of ordering the guards to open fire have been shambolic. Alberto Rotondo, then head of security who was fired by Tahoe soon after the event, was detained trying to flee Guatemala in 2013. He was held under house arrest but escaped with the help of his police guards and fled to Peru where he is awaiting extradition.

Another victim of the violence in Guatemala was Topacio Reynoso, just 16 when she was shot dead as she climbed into her father’s car in 2014.

“She went through a political awakening and educated us about the dangers of mining,” said Irma Reynoso, 41, sitting solemnly in front of the picture montage of her daughter that decorates the façade of their home.

Topacio’s father Alex was also shot, but survived after nine days in a coma.

Three years later no one has been charged. The original prosecutor is under investigation for allegedly leaking information to suspects, but still working.

Back in 2013, a few days after Fernando was shot, the government declared a state of siege around the mine and deployed troops armed with arrest warrants for anti-mining activists. No charges were ever proven, but dozens were detained arbitrarily for months, demoralising the movement.

The state of siege was instigated a few weeks after Tahoe attempted to sue the government to crackdown on protesters.

One of three military bases set-up during the siege remains in place. On top of its own private security, Tahoe’s subsidiary funded a new police station near the mine as part of an agreement to increase police presence.

Tahoe is facing claims for compensation in Canada for its role in the violence in April 2013. Three of the victims recently agreed out of court settlements with the company.

The Escobal mine controversy is not an isolated incident. Across Latin America, Canadian-owned mines have been linked to at least 44 deaths and 400 injuries between 2000 and 2015, according to the Brand Canada investigation by the Justice and Corporate Accountability Project (JCAP) at Osgoode Hall Law School in Ontario. A quarter of the documented violence took place in Guatemala, where the embassy is accused of promoting business interests over human rights.

Water is at the heart of the opposition to Escobal. Several locals told the Guardian that water sources were polluted and shortages increasingly common, even during rainy season. Locals fear that Escobal is part of a much larger project that includes numerous concessions across several farming regions – also dependent on clean plentiful water.

“If the company expands like it wants it will be the end of us,” said Amalia Lemus, a local activist in the lush coffee growing community of San Juan Bosco – where villagers say exploration has continued despite a 2016 court ruling ordering a suspension until MEM could guarantee water sources will not be adversely affected.

Tahoe said the accusations about water were “unsubstantiated and inaccurate”, and that allegations their mine is causing seismic activity in the nearby town of Casillas make “no scientific sense”.

Topacio’s father Alex Reynosa, 37, a passionate campaigner who survived a second assassination attempt a year later, has lost faith in the justice system. “The law doesn’t serve ordinary people like us, but we will never stop resisting to protect mother earth. If the state tries to repress us again, the only option would be armed resistance,” he said.

Impunity breeds violence, according to Jorge Santos from the NGO Protection of Human Rights Defenders in Guatemala (UDEFEGUA). “The Guatemalan state is designed to guarantee private interests and ensure impunity for the most powerful.”

“There are a small number of vocal opponents who foment intimidation and violence in the region. This has led to a number of violent incidents which sometimes creates a general environment of impunity that violent activists foment,” said spokeswoman Edie Hofmeister.

Amid mounting international condemnation of the attacks, the human rights prosecutor’s office in Guatemala City is analysing patterns of violence against activists, and investigating possible criminal wrongdoing by authorities approving licences and environmental impact studies.

On 6 July Guatemala’s supreme court confirmed preliminary suspension of Tahoe’s Escobal mining licence citing violation of indigenous people’s rights to be consulted. The company has filed an appeal seeking to overturn the decision.

“Extractive industries have generated social conflicts across the country which politicians haven’t stopped,” said Gilda Pineda, the country’s chief human rights prosecutor. “It’s been left to us to use the law to try and stop this vicious cycle of violence.”

This year, in collaboration with Global Witness, the Guardian will record the deaths of people who are killed while defending their land, forests, rivers or wildlife – most often against the harmful impacts of industry. We will also report on the stories of some of the land and environmental defenders still under attack. You can see the names of those who have died so far this year here. You can read more from the project here.