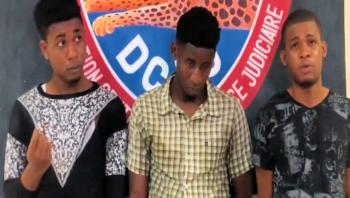 The poison they forced Evelyne Sincère to drink would have taken too long to kill her. So Obed ‘Kiki’ Joseph decided to squeeze the throat of his ex-girlfriend with his bare hands.

While Joseph squeezed, another assailant, Michel Domerçant, pushed a pillow onto Sincère’s face so her screams wouldn’t be heard. Sincère, 22, twisted her body, then kicked and grabbed at Joseph’s genitals. But the men kept at her until she stopped breathing.

Afterward, they carried Sincère’s body out of the house in a metal barrel, with the help of Domerçant’s older brother, and threw her onto a trash heap in Delmas 24, Port-au-Prince on Nov. 1.

That is how Sincère died, said Domerçant, 22, during a live streamed confession Mon., Nov. 9.

THE TORTUROUS KILLING HEIGHTENED SCRUTINY ON KIDNAPPINGS FOR RANSOM IN HAITI

The discovery of Sincère’s body led to a chain of head-turning events in the weeks that followed, including a gang capturing Joseph, who had gone into hiding, and turning him over to police. A rumor also broke out that Joseph’s father committed suicide — it turned out to be false — and creative offers of rewards were made for capturing the killers.

The torturous killing heightened scrutiny on kidnappings for ransom in Haiti and triggered calls across the Haitian diaspora for women and girls to be protected. The international attention added pressure on the authorities to track down the culprits.

By Monday, Joseph, Domerçant and his older brother Evald were in police custody and the suspects confessed during a press conference streamed on Facebook Live. Ruselène Benjamin, Michel Dormeçant’s girlfriend, is also in custody, but it isn’t clear what role she played in the heinous crime.

During the livestream, the three men shared various portions of the story. Joseph denies choking Sincère, saying that he only held her legs as Michel Domerçant suffocated her. But for the most part, the account appears complete — from how Sincère met Joseph on Facebook to his role in bringing Sincère’s life to an end.

Joseph said he started talking with Sincère on Facebook about a year and a half ago, but they had never met in person. Through direct messages, Sincère told Joseph her father is a deacon and owns a business, giving the impression that her family had financial means.

Joseph said the Domerçant brothers, whom he met through work, had been talking about kidnapping someone for weeks. When he told them that Sincère’s father is rich, the trio hatched a plan to trick Sincère into meeting Joseph, drug and kidnap her, and then release Sincère after receiving a ransom from her supposedly rich father.

On Oct. 26, a Monday, Joseph set the plan in motion by inviting Sincère to the Domerçant brothers’ house. She went.

At the house, Joseph gave Sincère a doctored drink that made her dizzy. They did not kidnap her that day because another occupant of the house was there, according to Garry Desrosiers, a police spokesperson.

Three days later on Oct. 29, a Thursday, Joseph asked Sincère to meet again. At first, she refused because she had to go to church. Joseph persisted until Sincère agreed. This time, they met at Viaduc de Delmas, Carrefour de l’Aéroport, a town square.

“Michel Domerçant was with me, he had ropes and tape,” Joseph said. “Michel said, ‘Let’s get to action.’ But me, I didn’t want to do it. My heart was racing. I didn’t want to get into this.”

Still, they carried out the act. Joseph said he and Michel Domerçant bound Sincère’s arms with the ropes, blindfolded her and gagged her with a piece of cloth. They then took her to the Domerçant brothers’ home in Nazon, about one mile from the town square.

For four days, the three men held Sincère against her will. At one point, Sincère urinated on herself, Joseph said, so he bathed her and one of the brothers put a shirt on her.

Joseph denies that they raped her.

Meanwhile, Sincère’s family frantically tried to raise the ransom money, coming up with 75,000 G, about $1,260. Sincère’s sister Enette Sincère said they planned to bring the cash to the kidnappers on Sunday, Nov. 1.

However, over that weekend, the brothers said they gave Sincère a liquid concoction made of rat poison and marijuana.

“That alone would have killed her but it would’ve taken longer,” Michel Dormeçant said. “So we laid her down, me and Obed. I put the pillow [over her face] so she wouldn’t make noise, then Obed squeezed her neck.”

The trio then carried Sincère’s dead body in a metal barrel to the dumpsite in Delmas. From there, they called Sincère’s family to tell them where to find her, according to Le Nouvelliste.

At least seven people were reported kidnapped in Port-au-Prince in the past month. Four have been released, but only Sincère was found dead.

When she was found, Sincère’s limbs and genitalia were severely bruised, hinting that she had been sexually assaulted, said Jean Flaury Raymond, a judge of peace.

The news sent shockwaves through Haiti and Haitian communities abroad, with many expressing their grief on social media. Some even used Sincère’s picture as their profile image to raise awareness and call for justice. Some celebrities stopped all of their activities to demand justice like singer Rutshelle Guillaume and radio host Carel Pedre.

As the news spread and a manhunt ensued for the culprits, Joseph went into hiding. He called in to a Radio Mega show on Nov. 3 and denied taking part in the kidnapping and murder.

“I’d like to be arrested so that this can end, so it can all be clarified,” Joseph said on that broadcast. “And [so] that the main author of the crime can take full responsibility for his actions in front of the authorities.”

Police traced that phone call, which led them to a neighborhood where G9 Family and Allies gang members reside.

The next day, Jimmy “Barbecue” Cherizier, the leader of the G9, a coalition of armed neighborhood groups sometimes branded “gangs,” streamed a video on Facebook Live. In that livestream, Cherizier said his group had captured Joseph. They then brought Joseph to the police station on Wed., Nov. 4 at night.

Some had speculated that Joseph is a G9 member, but he and Cherizier deny it.

On Monday, Nov. 9, Joseph and the Domerçant brothers had a tearful on-camera reunion during which Joseph broke down in Michel Dormeçant’s arms. Joseph wailed that his father had died, apparently believing the false rumor that his father committed suicide.

As for Joseph’s father, he said he thought about committing suicide. On Radio Caraibes Tuesday,  Gerard Joseph also said he told Sincère’s father that they’re “walking in the same shoes.”

“When I heard about it, I wanted to die,” Gerard Joseph said. “I consider [my son] even though is still alive as a dead man. So me and you [Sincere’s father] we took the same hit.”

In an interview via Love Pou Haiti’s YouTube channel, a man identified as Sincère’s father said he had hoped that her daughter was going to take care of him during his old days. The day Sincère was kidnapped, she had just taken her last 12th-grade state exam.

Sincère’s father said he’s no entrepreneur and sells goods in the streets to survive.

“I hustled in the streets (sell goods), through my misery they [my children] reached where they’re at,” Sincère’s father said. “Evelyne Sincère was ready. Tomorrow, she could’ve been helping me get up from the ground.”