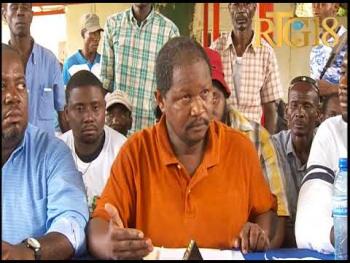 Rosemond Jean, the head of Mouvement Tet Kale (MTK), an organization of the Haitian Tet Kale Party, that held violent protests in the 2011 elections and received USAID funds to do so, essentially declared civil war in Haiti on Thursday.

Radio Tele Ginen, a media agency that aligns itself closely to the administration, entitled the video on YouTube Rosemond Jean di a la gè kòm a la gè. This means, Rosemond Jean says to fight like it's a war.

In the fiery declarations, Jean says:

So today, as of today, we declare, either the men and women in power, those in PHTK, those in the opposition sit together and come up with a political accord to take the country out of the trap that it is in today, or we go straight in to civil war. Because what is going on now cannot continue.

If there won't be dialogue. If they refuse to sit down, so that the political leaders can find a political solution, we're going into civil war.

Because in 1986, when Jean-Claude Duvalier left. The plane came, took Jean-Claude, his wife, his kids, they left with them. They left all the rest of them behind. They killed them, they burned them, they destroyed them. 30 years later here is where we are.

Today in 2019, we won't accept what's in the streets. As of this day, we call all soldiers and former soldiers... the same way I made the call to you... all citizens in Petion-Ville, in La Saline, in Delmas, in Carrefour, in the four corners of the country, we call you to mount the defense.

Get your guns. Get your equipment. Stand up. When we have a state we'll lay them back down.

We call the militias, police in difficulty, gather your means and join us. Already, in the Central Plateau, at Pernault, all the soldiers that did 2004. I know you have equipment, gather your equipment. All the soldiers in Port-au-Prince, I know you have equipment, find your equipment... so we can save, mothers and fathers of children. So we can save the remaining investors we have in the country...