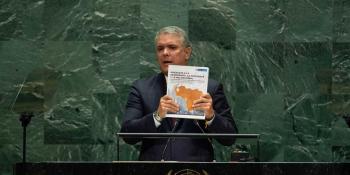 A spokesperson of the Defense Ministry called AFP to apologize for the use of three of the agency’s images in a report presented by President Ivan Duque to UN Secretary General Antonio Guterres on Thursday, the news agency said in a press statement.

In a telephone call on 27 September 2019, a spokesman for the Ministry of Defense apologized to AFP for the use of at least three AFP photographs in the dossier, which has not been made public in its entirety. In addition, the source acknowledged that the three AFP photographs had been taken in Colombia and not in Venezuela.

The AFP images used to sustain Duque’s claim that the Venezuelan government was “harboring narcoterrorists” were taken in the Colombian provinces of Choco, Norte de Santander and Guaviare.

Newspaper El Colombiano had already demonstrated that a fourth image of alleged guerrilla activity in Venezuela was in fact taken in the southwestern province of Cauca.

The battered president, who had published two of the images as “proof” of Maduro’s alleged ties to guerrillas on Twitter, said Friday that the evidence proven false by El Colombiano was “anecdotal” and “contextual.”

“The imbecile Ivan Duque went and presented a document and the images are all fake as they would be,” said President Nicolas Maduro, adding that the Colombian president’s performance at the UN was “embarrasing.”

Venezuela’s Vice-President Delcy Rodriguez told the UN General Assembly on Friday that her country has “specific and concise” evidence that the country harboring terrorists is Colombia.

Furthermore, the foreign minister claimed her country was facing “imminent aggression” by the United States.

Rodriguez said that she, like Duque, would surrender her alleged evidence to UN Secretary General Antonio Guterres.

US and Colombia isolated

The fabricated evidence given to the United Nations adds to alleged misinformation provided to the Organization of American States (OAS) by Foreign Minister Carlos Holmes Trujillo.

The minister was forced to retract his unsubstantiated claim made at the OAS that a reintegrating FARC rebel leader took part in alleged activity of dissident FARC leader “Ivan Marquez” in Venezuela.

Meanwhile, Venezuelan authorities and local media have released evidence that confirm claims Duque colluded with drug traffickers in a failed February operation to force American aid trucks across the border.

The Colombian government’s fabricated evidence to prove Maduro is “harboring narcoterrorists” and the evidence indicating Duque and US authorities worked with drug traffickers to oust Maduro have isolated the two allies.

With the exception of the US and Colombia, the majority of nations in the Americas and the European Union want Venezuela’s government and opposition to negotiate an end to their country’s crisis and restore democracy in the South American country.

Russia and China, who support Maduro, have also expressed their support for talks.