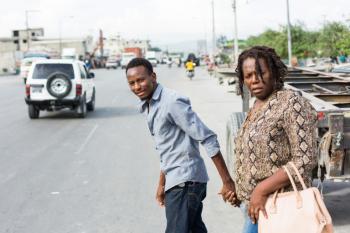 Yaisah Val, a transgender woman, and her husband Richecarde Val are working to fight discrimination against transgender people in conservative Haiti/AFP

Three days before their marriage, Yaisah Val of Haiti revealed to her fiance that she was transgender and had completed reassignment surgery – no small act for anyone, let alone in a country dominated by patriarchy and homophobia.

Her husband-to-be did an internet search to better understand what it meant to be transgender – people whose sense of gender and identity does not correspond to their genitalia.

Now, encouraged by her husband Richecarde, the 45-year-old Val is one of the first in Haiti to make public her gender identification and transsexuality, standing defiantly against the Caribbean nation’s religious and political conservatism.

“Gender is in your mind; sex is between your legs,” is the mantra of Val, who at age 29 completed her several-years long transition that resulted in sexual reassignment.

“It’s hard to realize at five or six years old that I am a scourge; that my body — even my existence — provokes disappointment and shame in my parents.”

A successful transition offered her the chance to become herself — even if it resulted in rejection from relatives who say “we cannot correct the good God.”

“God wants me to be miserable and kill myself?” Val asks.

“It’s ridiculous,” she says to those who still treat her as an “abomination.”

In the face of such hardship, her husband Richecharde has never given up on being with the one who has shared his life for more than two years.

He insisted his wife make public her identification as a positive example for the rest of their country.

“It’s not just Yaisah — she was able to go to the United States and undergo treatment,” he said.

“But how many young Haitians from lower classes are like that and lost because they cannot identify who they are?”

The Val couple works to educate their fellow Haitians with backing from the Kouraj organization, which has for years supported the country’s LGBTIQ – which stands for lesbian, gay, bisexual, trans, intersex and queer or questioning – community.

“We warned them of the risks, but I told them not to be afraid,” said Charlot Jeudy, president of Kouraj, recalling his first meeting with the pair.

“It’s a question of freedom, of rights.”

In the winter of 2016, an LGBTIQ film festival was forced to cancel over risks of violence and calls for murder.

And in August 2017, in a vote on whether to allow same-sex marriage, a number of senators used religious arguments to denounce it as “deviance of the West.”

“When you have a country you must be attached to your values and traditions. Abroad, some see it differently, but in Haiti, that’s how we see it,’ said Senate president Youri Latortue.

The notion that the idea of homosexuality and trans-identity is a “Western” creation frustrates the couple: “Some people say that I have a mission, that I am paid by the United States,” said Val.

Her husband laments that some Haitians believe “it’s the foreigners who came with it.”

“But the foreigners cannot change genetics,” he says. “They don’t have something to make a trans person — it exists everywhere in the world.”

Despite hate messages, the couple refuses to leave Haiti despite the prospect of an easier life abroad.

They instead work relentlessly to help their fellow Haitians in the face of discrimination.

“There were threats, but we also started receiving calls from mothers who explained that their child was like this,” Yaisah Val recalls.

“People who call in tears, relieved to finally find the words simply to explain who they are.”

That their mobile phones are overwhelmed with messages from young people searching for identity does not bother them, even if they spend hours answering.