Declaration of the 1804 movement for all immigrants 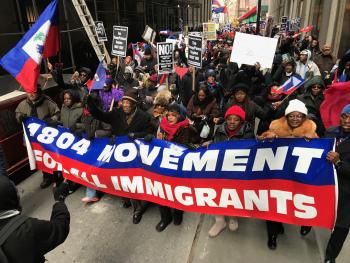 On Jan. 13, 2018, fifty activists and representatives of Haitian and U.S. parties and organizations met at Haiti Liberté newspaper in Brooklyn to forge a response to President Donald Trump’s racist remarks of Jan. 11 calling Haiti, El Salvador, and African nations “shithole countries” whose émigrés should not be allowed to stay in the U.S..

The 1804 Movement for All Immigrants was born at that meeting, around the following points of the unity. Any organization or individual can join the 1804 Movement if they agree with these five demands:

1) that President Donald Trump publicly apologize to all Haitians, Africans, and African-Americans for his racist remarks.

2) that permanent U.S. residency be granted to all holders of Temporary Protected Status (TPS) currently in the United States.

4) that U.S. police forces stop all forms of racial profiling and terror in the U.S., above all against black and brown people.

5) that there be an immediate end to the UN military occupation of Haiti (today known as MINUJUSTH) and to U.S. meddling in Haiti’s elections.

The 1804 Movement for All Immigrants has chosen to demonstrate on Wall Street because we condemn the politics of both Donald Trump and Hillary Clinton. We condemn both the Republican and Democratic parties. We condemn the entire political and economic system which enslaves this country, but also enslaves our countries, where our families and compatriots are forced to work for pennies a day for U.S. corporations. If we in the Caribbean, Latin America, Africa, or Asia try to flee our plight, to sell our smarts and labor elsewhere, we are arrested by the U.S. Coast Guard or Border Patrol. In short, we are imprisoned in our homelands. But the U.S. demands complete freedom to buy land, set up businesses, and sell products there. Our sovereign nations are, in fact, modern colonies, neo-colonies.

The system that is based here on Wall Street is a giant sucking machine. The U.S. has about 4.4% of the world’s population. But it enjoys about 42% of the world’s wealth! That’s why everyone is trying to come here!

So when Donald Trump says “Make America Great Again” and “Make America First,” what he really means is: “We want to keep the wealth we’re sucking from around the world for ourselves. We are the masters, you, people of the Global South, are the slaves.”

1804 was the year that self-freed slaves founded the Republic of Haiti, the first independent nation of Latin America and the first black republic. It was the first nation in history to abolish slavery, starting a wave of change that largely swept chattel slavery from the globe over the next century.

So the 1804 Movement for All Immigrants aims to end modern slavery, to end a world of walls: Wall Street, Border Walls, Walmarts.

We want to build a new world that will be more just, equitable, and sustainable, where our nations will be sovereign, our rights respected, and our futures bright. As our revolutionary Haitian ancestors said in 1804: “Liberté ou la mort!” Liberty or death!