Does Canada have a refugee crisis? No 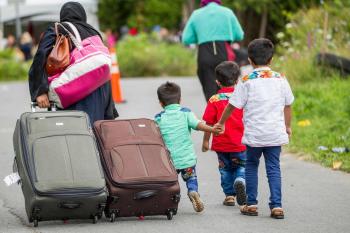 Some 50,000 persons came to Canada last year to claim asylum. This is barely more than the number that had arrived in 2001. Did the country or the economy collapse at any point since then?

Movements of people are extremely difficult to predict, and one should caution those already speaking about a summer influx, as numbers have dropped off markedly in May and June.

Many expressed fears that more and more people are not entering Canada through official border points. Actually, two thirds of those who came last year arrived with valid visas and through customs offices. Absolutely all are duly security cleared by the police and border authorities.

Even those who arrive through irregular means at Roxham Rd. in Quebec are all apprehended by the authorities. Indeed, those who come here to seek safety, whatever road they take, willingly hand themselves to the authorities as they want their refugee claims to be processed.

In line with international law — and more importantly, the values Canadians stand for — Canadian law provides that people who are fleeing wars and persecutions must be given the opportunity to tell their story and be recognized as refugees if they fear for their life back home. Like Bangladesh receiving 700,000 Rohingyas in a few weeks, Canada is only but upholding basic principles of law and humanity by processing persons who arrive on its territory in search of safety.

Refugee law recognizes that when one flees bombs or torture, one may not always take the most authorized routes to seek safety and get a visa before travelling. This is why, crossing a border at nonofficial points is not an illegal act. Words matter: those arriving in Quebec are not illegal — they are irregular crossers.

Many allege that these refugee claimants are all “bogus claims” as the bulk of arrivals is from Haiti and Nigeria. There is no war there, they argue. While bombs are not being dropped in these countries, some are still unable to enjoy their basic rights.

LGBTI individuals may be persecuted for what is totally accepted in Canada: having a different sexual orientation than the majority. Little girls may be at risk of female genital mutilation or forced marriage while Canadian girls go to schools. Amongst the top countries before the Canadian Immigration and Refugee Board are Yemen, Somalia and Palestine to name a few with a history of violence.

Ultimately the board will decide who is a refugee based on an individual assessment. Surprisingly for some, the overall acceptance rate has not changed since the increased arrivals from last summer.

Finally, let’s trust our institutions. Over the last year and a half, we have interviewed refugee claimants at the border and in shelters, Canadian police and border authorities as well as civil society organizations that have supported them. All have done a great job in processing, in an efficient, humane and orderly manner, these new arrivals. And they continue to do so.

Contingency plans are in place — including for temporary shelters. In this respect, refugee claimants receive a temporary work permit within 30 days of their arrival, which allows them to become rapidly economically self-reliant — thus not being a burden on social services.

The numbers are manageable for a rich and well-governed country like Canada. This was proved in spades last summer, and I have no doubt that — whatever may be the numbers this summer — the country will not collapse, and continue to serve as an example to others.

For all these reasons, it is wrong and irresponsible to instill fears about refugees in Canada. Facts matter. Words matter. Today’s refugee crisis is not here — but in countries neighbouring conflicts in Africa or the Middle-East. The least we can do when we see how these countries proudly and courageously welcomed hundreds of thousands of refugees is not to cry wolf here.

Jean-Nicolas Beuze is the representative in Canada of UNHCR, the UN Refugee Agency.

What happens when asylum seekers cross the border into Canada?

For some asylum seekers, arriving in Canada is the beginning of a legal process that can last as long as a decade.

The Phony ‘Illegal Immigrant’ Crisis and the Slow, Sad March to the 2019 Election

Is Canada in the throes of an illegal immigration crisis? This is certainly what we are being led to believe. Toronto is getting a $11 million from Ottawa to help deal with crowding in refugee housing. Quebec is barring asylum claimants from public daycare services, for fear of straining the system. Pundits and news anchors breathlessly repeat claims about “illegal crossings” and “queue jumping.” Opposition MPs are forcing the Parliamentary Immigration Committee to convene for emergency meetings in August to deal with the escalating calamity. If I didn’t know any better, I’d say something serious was going on!

It’s important to ensure Canada’s tattered social safety net doesn’t burst over Toronto and Montreal. Of course, as Vicky Mochama observes in the Toronto Star, the strain on housing and social services in Toronto long predates our current national fixation on the border. (You can also thank Stephen Harper’s changes to the immigration system for the backlog of thousands of claimants forced to wait for their hearings in housing units.) There is also no such thing as “queue jumping,” because all asylum claims are processed in the same manner whether or not someone is crossing at an official border point or an irregular entry like Roxham Road in Quebec. (Those of you white-knuckling your Canadian flags will be relieved to know that going the irregular route involves the claimants being detained, however.)

Everyone agrees that the status quo on asylum seekers in this country is untenable. But the Conservative Party of Canada (and the new Ontario provincial government) would have you believe the Canadian government is about to collapse under the weight of its broken borders. The Tories briefly even put an ad of a Black guy illegally waltzing into Canada across Justin Trudeau’s infamous “Canada loves refugees” tweet before deleting it out of a vestigial sense of shame. Something like it will soon be back; this is only the start of our white nationalist edging.

With Trudeau’s monopoly on partisan abuse of the word “feminism” revoked indefinitely, the vacuum has been quickly filled. Lisa Raitt, Michelle Rempel, and Lisa MacLeod have each staked out the ingenious position of “here is some inflammatory bullshit about ‘illegal immigration’, if you @ me you hate women.” This asinine counter-attack was probably inevitable the minute Trudeau started shouting “gender!” like it was a magic word. If not, his recent impressive appetite for male feminist crow surely sealed the deal.

This gongshow does give us a foretaste of the next federal election. That federal Immigration Minister Ahmed Hussen’s response to Ontario’s provocations over asylum seekers was to characterize immigration fearmongering as “not Canadian” suggests the Trudeau Liberals a) really need to read a Canadian history book and b) still haven’t learned how to read a room. Are the culture war hawks in the PMO sure this is a fight they can win?

Things are on track to get worse before they get better. The CPC have learned that going hog wild on deliberately outrageous falsehoods in order to rile up the worst impulses in the country is a winning political strategy. Few media will outright call time on this and others will continue to grant the bloodless “both sides” pablum that allows this cancer to spread across the body politic. It’s what the Republicans pulled off in 2016 and Doug Ford established the proof of concept in Ontario a month ago. Contrary to all those beloved myths about Canada being a progressive superpower immune to the politics of resentment, all this stuff is going to work here too. Our ailing institutions don’t stand a chance.

Meanwhile, the feds are acutely aware that the next campaign will be not just against the Opposition parties but also the provincial government of Ontario. By shuffling Bill Blair into the border security file, Trudeau is demonstrating his willingness to beat Doug Ford at his own game.

Some observers were thrilled by the partisan gamesmanship of appointing an old Ford family foe to a post requiring him to directly troll Queen’s Park. Fewer seem fazed by the fact that Blair was instrumental in both Toronto’s G20 civil liberties fiasco in 2010 and the expansion of racialized carding in the GTA. Yet fewer have considered perhaps the subtlest and most insidious development of all, as expressed to the National Post by political scientist David Moscrop: “It makes the central lens of asylum seekers a security lens and not a humanitarian lens. You don’t think compassion. You think security.”

By effectively conceding rhetorical and policy ground to the “fearmongering” Tories, the Liberals run a few risks: a) legitimizing all future CPC attacks on migrants as a security threat; b) creating border policies that needlessly hammer vulnerable asylum seekers; c) losing this battle anyway because they have chosen to fight it entirely on Conservative home turf. One delightfully obnoxious op-ed in the Toronto Star recently suggested an extortionary political formula—‘the government needs to get harder on immigration, or else people will become more regressive and elect a government that gets harder on immigration’ - that has the whole thing backwards. The more people see their government and media personalities address asylum seekers as criminals, the more they will come to think of these people as criminals. The more you are fed, the bigger your appetite gets.

You can thank the Liberals for bringing us down this road. It is arguably one of the structural shortcomings of our new Trudeauvian philosophy. The federal government and its fellow-travelers in media have been behaving as if all our cultural struggles are actually over and settled for all time (“because it’s 2015”) and tarred everyone who interrogated its empty platitudes with the same bad faith brush. As it turns out, people don’t submit to vacuous moralizing just because their boss keeps telling them “you are are better than this.” Trying to benevolently smother thought out of politics may actually have laid the groundwork for less scrupulous attempts by partisans to end-run democracy by gaming our lizard brains.

Trudeau’s “welcome to Canada” tweet did not ease the process of claiming asylum in this country, nor did it trigger the new movement of refugees across our borders. It was little more than a cynical stunt in its own right, one of the high-water marks of Canada’s new “sunny ways.” It is now another one of the traps that Trudeau seems to have inadvertently laid for himself and, from the looks of things, those fleeing to Canada for a better life.

One hesitates to draw the conclusion that three years of high-handed but half-assed efforts to drag the public along with whatever TEDx bullshit the Liberals are floating may have generated the feelings of resentment necessary for far right politics to flourish. Or perhaps it stems more out of the contrast between actually existing Liberalism and Trudeau’s advance publicity.

Or, maybe, it was premature to assume total progressive domination in the great Canadian culture war. Maybe the prime minister’s victory parade is an ambush.