Does Canada support an invasion of Venezuela? 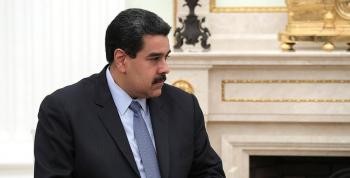 Ottawa is backing talk of an invasion of Venezuela, and the NDP is enabling Canada's interventionist policy.

Last week 11 of the 14 member states of the anti-Venezuelan "Lima Group" backed a statement distancing the alliance from "any type of action or declaration that implies military intervention" after Organization of American States chief Luis Almagro stated: "As for military intervention to overthrow the Nicolas Maduro regime, I think we should not rule out any option … diplomacy remains the first option but we can't exclude any action." Canada, Guyana and Colombia refused to criticize the head of the OAS' musings about an invasion of Venezuela.

In recent weeks there has been growing tension on the border between Colombia and Venezuela. Some believe Washington is pushing for a conflict via Colombia, which recently joined NATO.

Last summer Donald Trump threatened to invade Venezuela. "We have many options for Venezuela including a possible military option if necessary," the U.S. president said.

Talk of an invasion likely encourages those seeking regime change. At the start of August drones armed with explosives flew toward Maduro during a military parade in what may have been an attempt to assassinate the Venezuelan president. Two weeks ago the New York Times reported that U.S. officials recently met members of Venezuela's military planning to oust Maduro. U.S. Secretary of State Rex Tillerson called for the military to oust Maduro in February and other leading Republican Party officials have made similar statements.

Alongside these aggressive measures, Canada has helped to weaken the Venezuelan government. Since last September Ottawa has imposed three rounds of sanctions on Venezuelan officials. In March the United Nations Human Rights Council condemned economic sanctions the U.S., Canada and EU have adopted against Venezuela while Caracas called Canada's move a "blatant violation of the most fundamental rules of international law."

Over the past year and a half Canadian officials have campaigned aggressively against the Venezuelan government. Foreign Minister Chrystia Freeland has prodded Caribbean countries to join the Lima Group's anti-Venezuela efforts and made frequent statements critical of Caracas' democratic legitimacy and human rights record. In June Freeland told the OAS General Assembly, "we must act immediately on the situation in Venezuela to force the exit of the dictatorship."

Ottawa has encouraged its diplomats to oppose human rights violations and supported opposition groups inside Venezuela. A 27-page Global Affairs report uncovered by the Globe and Mail noted, "Canada should maintain the embassy's prominent position as a champion of human-rights defenders." Alluding to the hostility engendered by its interference in that country's affairs, the partially redacted 2017 report recommended that Canadian officials also "develop and implement strategies to minimize the impact of attacks by the government in response to Canada's human rights statements and activities."

As part of its resistance to the elected government, Ottawa has amplified oppositional voices inside Venezuela. Over the past decade, for instance, the embassy has co-sponsored an annual Human Rights Award with the Centro para la Paz y los Derechos Humanos whose director, Raúl Herrera, has repeatedly denounced the Venezuelan government. In July the recipient of the 2018 prize, Francisco Valencia, spoke in Ottawa and was profiled by the Globe and Mail. "Canada actually is, in my view, the country that denounced the most the violation of human rights in Venezuela … and was the most helpful with financing towards humanitarian issues," explained Valencia, who also told that paper he was "the target of threats from the government."

In another example of anti-government figures invited to Ottawa, the former mayor of metropolitan Caracas, Antonio Ledezma, called for "humanitarian intervention" before the Subcommittee on International Human Rights of the Standing Committee on Foreign Affairs and International Development last week. He said:

"If the international community does not urgently activate the principle of humanitarian intervention for Venezuela -- which developed the concept of the responsibility to protect -- they will have to settle for sending Venezuelans a resolution of condolence with which we will not revive the thousands of human beings who will lose their lives in the middle of this genocide sponsored by Maduro."

In November Ledezma escaped house arrest and fled the country.

The NDP's foreign critic has stayed quiet regarding U.S.-Canada opposition to Venezuela's elected government. I found no criticism by Hélène Laverdière of U.S. or OAS leaders' musing about invasion or the August drone incident targetting Maduro. Nor did I find disapproval from the NDP's foreign critic of Canadian sanctions or Ottawa's role in the Lima Group of anti-Venezuelanforeign ministers. Laverdière has also failed to challenge Canada's expulsion of Venezuelan diplomats and role in financing an often-unsavoury Venezuelan opposition. The Foreign Affairs diplomat has repeatedly found cause to criticize Venezuela and has called on Ottawa to do more to oppose Maduro's government.

Is Canadian political culture so deformed that no party represented in the House of Commons will oppose talk of invading Venezuela? If so, it's not another country's democracy that we should be concerned about.

Dubbed "Canada's version of Noam Chomsky" (Georgia Straight), “one of the most important voices on the Canadian Left today” (Briarpatch), "in the mould of I. F. Stone" (Globe and Mail), "ever-insightful" (rabble.ca) and a "Leftist gadfly" (Ottawa Citizen), Yves Engler has published nine books.