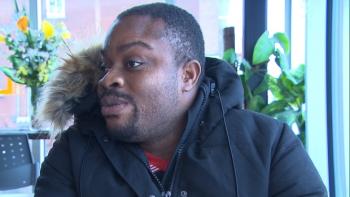 Severson Junior Lormilus was a journalist in Haiti, but fled after his work trying to expose corruption in the country prompted threats against him. (CBC)

Severson Junior Lormilus has been in Canada for less than a month, but says it already feels "a little bit like home."

Lormilus, who worked as a journalist in Haiti, fled the Caribbean country in December after he began to receive threats.

"I'd say the human is at the heart of the country here in Canada," Lormilus said in an interview Friday at Montreal's Haitian community centre La Maison d'Haïti. Friday was the eighth anniversary of the earthquake that ravaged his country. It killed more than 250,000 people, injured as many and displaced 1.5 million, thousands of whom are still without a home.

Major natural disasters have punctuated political instability in the country for the past two decades, forcing many to leave.

Despite it all, Lormilus says he's proud to be Haitian.

"Haiti made history, so it is a great nation," he said.

It's why he says it was especially hurtful to hear one of the most powerful people in the world, U.S. President Donald Trump, calling countries that received temporary protective status (TPS), including Haiti and El Salvador, "shithole countries."

Trump made the comments Thursday, on the eve of the earthquake's anniversary.

"To hear an American president treat my country that way, it's extremely difficult," Lormilus said.

The blows Haiti and its people have been dealt over the years haven't taken away its resilience and its values, said Lormilus.

Too often the story told of Haiti is one of misery, he said, adding he believes the comment is an opportunity for Haitians to shed a more positive light on their country.

"We have beautiful things in Haiti."

"It's a continent of immigrants"

Marjorie Villefranche, the director of Maison d'Haiti, which helps asylum seekers from several different countries settle in Montreal, says Trump's words did not surprise her.

"I always remember the anger he had about Obama being president," she added. "So, a racist reaction and a racist comment is not new."

"Anger is bad energy that I don't want to use," Villefranche told CBC News.

She said there was an irony in the president's remarks. "It's a continent of immigrants," Villefranche said of North America. "So what's he talking about?"

Friday wasn't the only significant anniversary for Haiti in the past two weeks. Jan.1 was the 214th anniversary of Haiti's freedom from French rule.

The Haitian Revolution, beginning in 1791 and ending in 1804, is known as the most successful slave rebellion in history.

Haiti is the first black republic in the world and, after the U.S., the second oldest independent nation in the Western hemisphere.

"I know who I am and we know, as Haitians, who we are and how we help America. So why be angry?"

Like Lormilus, she sees the difference in how Canada treats asylum seekers.

Unlike the U.S., Canada provides work permits, some health coverage and schooling for children, she added.

But still, Villefranche said, Canada's welcoming image doesn't always match up with the reality newcomers face upon their arrival.

A large number of Haitian refugees do not get to stay, despite the difficulties plaguing their country, and settling can prove harder than expected.

There are also ways Canada and the U.S.'s policies resemble each other. Canada ended its moratorium on deportations to Haiti in 2015, two years before Trump did late last year.