Donald Trump just dug up the old Haiti AIDS myth. Help us shut it down 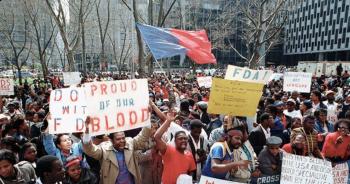 The eye of Sauron sits atop Trump Tower. And this week his stare is fixed firmly on Haiti. According to U.S. officials, Trump unhelpfully suggested that Haitian immigrants “all have AIDS.” These comments lack originality, yet they still wield a lethal power.

Donald Trump’s association of Haitians with HIV/AIDS fuels the nativism that forms the bedrock of his presidency. He fires this nonsense in every direction, suggesting that they pose an imminent health risk to white Americans. Such narratives conveniently allow him to court support for his anti-immigration, pro-deportation policies. Haitians, at home and abroad, have long fought this stigma, but outbursts like these are harmful and must be challenged.

Haiti is often uncritically tied to images of illness. These tactics, as shameless and lurid as they appear, are sadly nothing new. The fear of contagion has long been assumed an inevitable and unforgivable part of blackness. It feeds into the portrayal of Haiti as a place of death, disease, and suffering – the proverbial White Man’s Grave. A threat to the so-called “civilized” peoples of Europe and the U.S.. Evidence of the alleged failure of black rule.

During the revolutionary period, it was yellow fever, Leclerc’s bane, that forged this image in xenophobic minds. One hundred years later, outsiders feared the spread of syphilis and leprosy. In recent years, the UN has exploited Haiti’s disease-ridden reputation to deflect attention from their role in introducing a devastating cholera epidemic to the country. Over one million Haitians were infected. Close to 10,000 have died.

Before the arrival of the UN, not one case of cholera had ever been reported in Haiti. The source of the outbreak was directly linked to a UN peacekeeping force throwing fecal matter into a local river. Many, however, deflected blame by implicitly and falsely suggesting that cholera had originated from Haiti’s weak infrastructure and poor sanitation.

Cholera is but the latest example of the destructive impact of foreign meddling in Haiti. The extractions of the gunboat diplomats and the U.S. occupation slowly eroded Haitian infrastructure, as did a cycle of failed or temporary health interventions. The Duvalier kleptocrats (backed, lest we forget, by Presidents Nixon and Reagan), further impoverished the Haitian state. Rural health facilities were cut down to nothing, becoming increasingly dependent on external assistance often not even fit-for-purpose.

By the latter half of the twentieth-century, as health infrastructure stagnated, Haiti became increasingly vulnerable to the entrance of epidemics. As popular belief stands, in the 1970s Haitians introduced HIV/AIDS to the U.S.. In reality, it was the other way around. Wealthy U.S. holidaymakers – many of whom indulged in sex tourism – helped spread the deadly disease.

The rumors, however, mortally wounded Haiti’s flourishing tourist industry, at one point far more successful than its neighbor, the Dominican Republic. In Miami, Montreal, and New York, the diaspora was ostracized. Haitians unwittingly became the intouchables.

And so we come to the real story about Haiti and its association with disease. For years, foreign hands have stifled the country’s development, playing an active and harmful role in the creation of the health crisis we see today.

Trump’s words strike at the heart of how images of poor health have fueled racism against Haitians. To be Haitian is to be ill and contagious, they claim. This is not only grossly reductive, it also completely ignores the real reasons behind the development of this notion.

Here at the Haiti Support Group, we will not let Trump’s comments go unchallenged. We must tear down the false legitimacy of his words and show them for what they are – yet another chapter in a shameless and racist effort to demonize the Haitian people.

Antony Stewart is the chair of the London-based Haiti Support Group, on whose website this article’s original version was published.