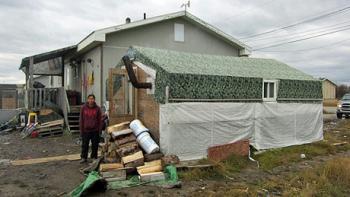 Editorial, Toronto Star, Aug 3, 2012
When people in a Northern Ontario community were living in tents and overcrowded shacks without running water or proper heating, they could have used a housing expert or maybe a builder with a load of quality supplies. Even a grocer with boxes of fresh fruit and vegetables would have come in handy. But Ottawa’s response to this situation in the First Nations community of Attawapiskat last winter (20011/12) was to send in a third-party manager, essentially an accountant to look at the books.

Now, a federal court has ruled — in line with what Canadians instinctively knew at the time — that this was a completely “unreasonable” reaction to the crisis at hand. “The decision to appoint (a third-party manager) did not respond in a reasonable way to the root of the problems at Attawapiskat nor to the remedies available,” Justice Michael Phelan stated in his ruling.
The root causes of the crisis were not hard to pinpoint: too many people, in too few homes and not enough money to do anything about it. There was never going to be anything a bureaucrat could do about that, especially not with winter temperatures dropping fast. But, then, the federal government has never bothered much about the root causes of anything on First Nations reserves. That’s why many remain chock-a-block with poverty and hopelessness.
Still, we would have thought that Ottawa would at least have had serious cause for concern before stripping a community of its financial independence. Unfortunately, even that assumption gives Aboriginal Affairs Minister John Duncan too much credit. The federal government had no evidence of any financial wrongdoing when they sent in the manager, according to the court ruling. That means Prime Minister Stephen Harper, who did his best to convince Canadians that the band council was to blame for the housing crisis because they had somehow mismanaged funds, was way off base. All he did was create even more distrust among native leaders. That’s the last thing Canada needs.
This episode gets more depressing still. To this day, the housing crisis in Attawapiskat — and dozens of other northern native communities — remains largely unsolved.
A few things are better, thankfully. There are 22 families now living in new trailers. That’s a drastic improvement for them. But 60 people are still living in an overcrowded and dangerous construction trailer; 20 are living on cots in a healing lodge; and still more live in houses so covered in mould they ought to be condemned, according to New Democrat MP Charlie Angus, whose riding includes Attawapiskat.
So after all that’s happened we still have a housing crisis and we still don’t have a federal commitment to a long-term plan, backed by the necessary funds, to fix it. How discouraging is that? We would have thought that the Red Cross flying in emergency supplies to keep people from freezing would wake up Ottawa and be enough to set this community, and others like it, on the path to a better future. Apparently not.


Minister doesn’t back loans in proposal for building 30 homes

OTTAWA— A plan to build muchneeded houses in Attawapiskat fell through because of lack of support from Aboriginal Affairs Minister John Duncan, leaders in the northern Ontario aboriginal community revealed Friday.

Acting Chief Christine Kataquapit said an application to Canada’s national housing agency for help financing the construction of 30 houses in Attawapiskat was not approved because Duncan refused to sign off on an agreement between Attawapiskat and the Canada Mortgage and Housing Corp. (CMHC). And Kataquapit said the letter from CMHC ruling out financial support for the housing plan was written Aug. 2, a day after a Federal Court judge gave the Harper government a black eye over its decision to send a third-party manager into Attawapiskat last year.

The community had applied for support to build houses under CMHC’s non-profit, on-reserve housing program, which provides loans to First Nations to build or rehabilitate rental units. The loans are insured under the National Housing Act and must be guaranteed by Duncan, minister of aboriginal affairs and northern development.

Kataquapit said CMHC’s Aug. 2 letter said Attawapiskat’s application for funding was being rejected because of the inability to obtain a ministerial loan guarantee for the planned housing project.

“We were disappointed to receive the letter that we were not selected because we are still scrounging around for housing units for our members and there’s a shortfall,” she said in an interview.

Attawapiskat, a community of 2,000 on the edge of James Bay, attracted national attention after it declared a state of emergency last fall when a severe housing shortage left more than two dozen families facing the winter in flimsy, uninsulated temporary shelters. Responding to a storm of criticism, Ottawa spent more than $3 million to provide emergency shelter, including 22 new mobile homes to relieve the crisis.

Asked if she thought Duncan’s refusal to provide a loan guarantee had anything to do with that ruling, Kataquapit said, “I listened to the news where they were saying that Duncan said (the federal government) was disappointed that Attawapiskat won.” But she said community leaders haven’t yet asked Duncan to explain why Attawapiskat didn’t get the loan guarantee required by CMHC.

NDP MP Charlie Angus, whose riding includes Attawapiskat, said the chain of events raises questions about the government’s attitude toward improving the situation in Attawapiskat. The plan that fell through “would have gone a long way toward alleviating any housing crisis in that community,” he said.