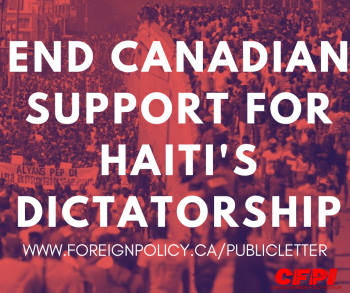 It is time to change Canadian policy towards a nation born in struggle to liberate Africans from slavery.

The Canadian government must end its support for a repressive, corrupt Haitian president devoid of constitutional legitimacy. For the past two years Haitians have demonstrated their overwhelming opposition to Jovenel Moïse with massive protests and general strikes calling for his departure from office.

Since February 7 Jovenel Moïse has been occupying the presidential palace in Port-au-Prince in defiance of the overwhelming majority of the country’s institutions. Moïse’s claim to another year on his mandate was rejected by the Superior Council of Judicial Power, Haitian Bar Federation and other constitutional authorities. In response to the opposition selecting a Supreme Court judge to head an interim government after his mandate expired, Moïse arrested one and illegally dismissed three Supreme Court justices. The police were also sent to occupy the Supreme Court and repress those protesting, shooting two reporters covering the demonstrations. The country’s judges have launched an unlimited strike to force Moïse to respect the constitution.

Moïse has ruled by decree since January 2020. After the mandates of most officials expired due to his failure to hold elections, Moïse announced a plan to rewrite the constitution. Fair elections are unlikely under Moïse’s leadership as he recently pressured the entire electoral council to resign and then appointed new members unilaterally.

Having garnered fewer than 600,000 votes in a country of 11 million, Moïse’s legitimacy has always been weak. Since massive anti-corruption and anti-IMF protests erupted in mid-2018 Moïse has become steadily more repressive. A recent presidential decree criminalized protest blockades as “terrorism” while another established a new intelligence agency with anonymous officers empowered to infiltrate and arrest anyone deemed to be engaging in ‘subversive’ acts or threatening ‘state security’. In the worst documented case, the UN confirmed the Haitian government’s culpability in a massacre of up to 71 civilians in the impoverished Port-au-Prince neighborhood of La Saline in mid-November 2018.

All this information is available to Canadian officials, however, they continue to fund and train a police force that has violently repressed anti-Moïse protests. The Canadian ambassador in Haiti has repeatedly attended police functions all the while refusing to criticize their repression of protesters. On January 18 ambassador Stuart Savage met the controversial new head of police Leon Charles to discuss “strengthening the capacity of the police.”

It’s time for the Canadian government to stop propping up a repressive and corrupt dictatorship in Haiti.

Peter Hallward, author of Damming the Flood: Haiti and the Politics of Containment

Jeb Sprague, author Paramilitarism and the assault on democracy in Haiti

Khaled Mouammar, Former Member of the Immigration and Refugee Board of Canada

John McMurtry, Professor & Fellow of the Royal Society of Canada