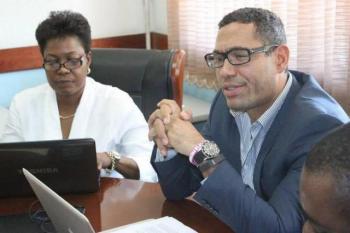 Klaus Eberwein, left, former head of a Haitian government development agency, was found dead Tuesday, July 11, in a Miami area hotel with a gunshot wound to the head. His death has been ruled a suicide. FAES

Klaus Eberwein, a former Haitian government official, was found dead Tuesday in a South Dade motel room in what the Miami-Dade medical examiner’s office is ruling a suicide.

“He shot himself in the head,” said Veronica Lamar, Miami-Dade medical examiner records supervisor. She listed his time of death at 12:19 p.m. The address where Eberwein’s body was discovered according to police, 14501 S. Dixie Hwy., is a Quality Inn.

A supporter of former Haitian President Michel Martelly, Eberwein served as director general of the government’s economic development agency, Fonds d’assistance économique et social, better known as FAES. He held the position from May 2012 until February 2015 when he was replaced. He was also a partner in a popular pizza restaurant in Haiti, Muncheez, and has a pizza — the Klaus Special — named after him.

“It’s really shocking,” said Muncheez’s owner Gilbert Bailly. “We grew up together; he was like family.”

Bailly said he last spoke to Eberwein, 50, two weeks ago and he was in good spirits. They were working on opening a Muncheez restaurant in Sunrise, he said.

But it appears that Eberwein had fallen on hard times. An Uber spokesperson confirmed that he worked as a driver for awhile in South Florida.

During and after his government tenure, Eberwein faced allegations of fraud and corruption on how the agency he headed administered funds. Among the issues was FAES’ oversight of shoddy construction of several schools built after Haiti’s devastating Jan. 12, 2010, earthquake.

Eberwein was scheduled to appear Tuesday before the Haitian Senate’s Ethics and Anti-Corruption Commission, the head of the commission, Sen. Evalière Beauplan confirmed. The commission is investigating the management of PetroCaribe funds, the money Haiti receives from Venezuela’s discounted oil program.