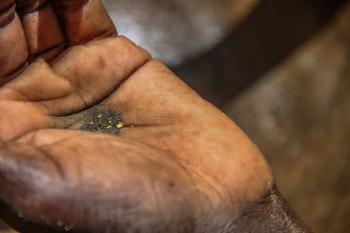 An ounce of gold. The deposits of Grand Bois, Failles B, and Morne Bossa could yield a total of no less than 1.3 billion US dollars. Credit: Milo Milfort

Haiti’s mineral wealth is still protected by a moratorium on mining activities imposed by the Haitian Senate five years ago, and a new mining law drafted in 2017 remains in a drawer somewhere. Nonetheless, tensions are rising between mining companies, the Haitian State, and civil society. For decades, many have salivated over the riches hidden in Haiti’s subsoil. Frustration is high. And in this uncertain climate, almost anything can happen.

(The first of three parts)

Three periods of large-scale mining between 1492 and 1982 and more than four decades of exploration have proved that Haiti’s subsoil contains large deposits of gold, silver, and copper. Ironically, many Haitians refuse to believe that their impoverished country’s subsoil is overflowing with high-value mineral resources, which could trigger renewed mining activities over several decades.

A mineral belt extends from Jean-Rabel in Haiti’s northwest to Pueblo Viejo in the Dominican Republic. The geological similarities between the two countries stokes a much-cherished hope among corporations and Haitian authorities, which are anxious to extract the treasure hidden in Haiti’s northern mountain ranges and persist in the controversial belief that “mining resources can bring development.”

Morne Bossa and Grand Bois, with proven mineral potential, could symbolize the golden future of Haiti.

“There is a possibility of finding mines which are much more interesting than the small deposits we have so far,” said Claude Prépetit, director of the Office of Mines and Energy (BME) in a lecture given at the National School of Applied Geology (ENGA) in June 2018. “But, we must do the research.”

Not everything is decided yet. The state and civil society are still arguing over the question: should we exploit mineral resources or not?

To date, there has never been an open national dialogue. On the contrary, state institutions and mining companies have kept the public completely in the dark.

Despite the impatience of the international and “national” mining companies, they have been at loggerheads for quite a while and accuse each other, among other things, of intolerable misconduct, incompetence, and blatant violation of the Haitian laws.

In this virtual Cold War, who will prevail? Enquet’Action investigated to reveal the position of the various protagonists.

The state has signed two mining conventions, but until today it is difficult to know if these two conventions are equal.

The agreements’ purpose was supposedly to establish the general, technical, economic, legal, administrative, financial, fiscal, customs, social, and environmental conditions under which a company would carry out exploration and mining activities within defined perimeters.

A first accord was signed with the mining company Citadelle S.A. – 70% owned by KWG Resources Inc., Quebec – for the exploitation of gold-silver deposits of Grand Bois and Morne Bossa in northern Haiti. The other mining agreement of February 1997 had been signed with the mining company Sainte-Geneviève Haiti S.A. – 70% owned by KWG Resources Inc. – for carrying out research and exploitation at Douvray, Blondin, and Failles B in Haiti’s northeast.

According to the mining law of 1976, these conventions should have been approved by the Parliament and published in the official government journal Le Moniteur before any exploitation. It is not enough that the government and the Superior Court of Accounts and Administrative Disputes (CSC-CA) have negotiated, signed, and approved them.

Due to procrastination and political crises, these conventions were not approved by the Senate and remained not in effect until 2005.

Finally, in May 2005, under the de facto government led by Prime Minister Gérard Latortue, the conventions were published in Le Moniteur. However, this publication took place without the prior consent of Parliament. So, for some, this defect makes the conventions illegal.

The wealth generated by mining would not remain in Haiti, it seems, but would rather enrich mining companies.

In December 2012, three mining licenses, including those for Grand Bois and Morne Bossa, were delivered by then BME Director General Ludner Rémarais. This was done in total opacity, without consulting Parliament or communities likely to be affected by social and environmental impacts. These operating licenses are still valid. Only the research permits have expired. In the 1976 Mining Decree, the period of validity for exploitation permits is not specified.

Shortly thereafter, in January 2013, the Haitian Senate’s Committee on Public Works, Transport and Communications (TPTC) held a tumultuous session during which the BME director burst into tears under the weight of questions he was unable to answer. A month later, the Senate imposed a moratorium on mining activities which is still in place today.

Translated from the original French by Kim Ives