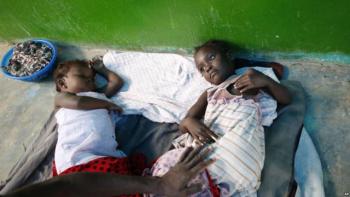 Haiti could stem its seven-year-long cholera epidemic by the end of 2018 as the number of reported cases has dropped sharply, government and United Nations officials said.
The health ministry said Haiti has had about 7,400 suspected new cholera cases since the start of the year, compared with almost 20,200 at the same point last year. "We have never seen so few cases," Donald Francois, head of the health ministry's national cholera program told Reuters in an interview. "With the cases we've seen we think we can eliminate cholera by the end of 2018."
There were more than 18,600 cases in the first six months of 2015 and some 7,451 in the same period in 2014, according to health ministry figures.
An estimated 9,300 people have died and more than 800,000 have fallen ill from cholera since U.N. peacekeepers accidentally introduced the disease in 2010 when they dumped infected sewage into a river outside of Port-au-Prince.
A program to provide residents with water purification tablets and efforts to find the source of new outbreaks has likely led to the decline in cases, said Marc Vincent, the U.N. Children's Fund (UNICEF) representative for Haiti.
A cholera vaccination drive in November targeting more than 800,000 people also probably boosted immunity, Vincent said.
Still, with funds to combat cholera slow to trickle in and Haiti needing vast improvements to its water and sanitation systems, the country remains vulnerable to new outbreaks.
About 40 percent of Haiti's population are without daily access to clean water and less than one in four residents has regular use of a toilet, according to Pan-American Health Organization and World Bank figures.
"The number of reported cases can certainly decline dramatically and even fall to zero. Most likely, though, there will continue to be a low-level number of cases, maybe seasonally, maybe year-round," said Ronald Waldman, a global health professor at George Washington University.
Waldman said Haiti could expect periodic spikes of cholera during natural disasters such as hurricanes.
Former U.N. secretary-general Ban Ki-Moon apologized in December for the handling of the outbreak and announced a $400-million trust fund to fight cholera and to rebuild communities struck by the illness.
But countries have been slow to contribute to the fund. So far, seven countries have given $2.67 million, nearly all of which has been spent, according to the United Nations.
Posted July 10, 2017