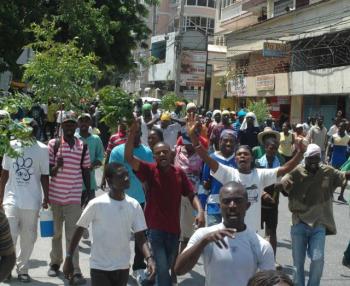 Thousands of Haitians march on June 25, 2012 to assert the right to housing

Below are discussion notes prepared by the Canada Haiti Action Network on the subject of housing in Haiti that point to a different course. Just like every other country in the world that acquired a stock of rental, cooperative and even private housing, a massive government program of credit, financing and public works is required to meet Haiti's housing needs. The notes below are but a sketch of the discussion and planning that is required for this vital issues for Haiti's recovery and reconstruction follwoing the 2010 earthquake.

According to figures compiled in a six page report published in June 2012 by the Port-au-Prince-based Center for Research, Reflection, Training, and Social Action (CERFAS), an estimated 300,000 new lodgings were required in Port au Prince on the eve of the earthquake.

The post-quake survey commissioned by Haiti's Public Works, Transportation and Communication Ministry and directed by Miyamoto International showed 20% of the estimated 414,000 dwellings in the capital were damaged beyond repair and another 26% were unsafe for habitation, requiring structural repair. That's close to 200,000 buildings requiring replacement or major repair.

Housing and shelter efforts by the international relief effort have been directed overwhelmingly to building temporary shelters. CERFAS reports that 109,000 ‘t-shelters' have been erected, compared to 13,000 homes repaired and 5,000 permanent homes built. Many housing experts in Haiti and abroad have raised serious objections to such a disproportionate shelter program.

Temporary shelters have absorbed 79% of the $461 million spent so far on shelter. An additional 5,000 t-shelters are projected by international organizations.

The ‘16/6’ program of the Haitian government and its international partners has touched app. five percent of residents of the internally displaced persons camps. Of the hundreds of thousands of others that have left idp camps in the past year, Leonard Doyle of the IMO told AP reporter Trenton Daniel that the organization doesn’t keep track of who they are and where they have gone.

To meet critical housing needs, every country in history, including the developed capitalist countries, has created vast public works programs to build and manage rental stock as well as financing programs to facilitate private home ownership. Haiti will be no exception to this rule.

Nothing in the UCLBP document points in this direction. For all of its reliance on the “private sector” to meet Haiti’s needs, there is not even a proposal in the document to create a financing mechanism of this ‘Open for business’ model.

Housing advocates for Haiti should study and publish the examples from other ocuntries of successful housing campaigns. In many countries of southeast Asia, for example, vast public enterprises were created to build and manage the needed housing stock. For another example, Canada and the United States created entities during and after World War Two to build or finance public and private housing.

The collapse of the housing bubble in the United Stats and Europe in 2008/09 is a warning of the folly of total reliance on the “private sector” to meet social needs, in this case housing, needs.