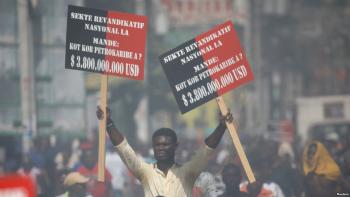 The cabinet chief and the secretary general of the presidency were removed from office along with 15 government advisers, an official announcement said.

"To have a healthy process, the president has decided to rid the environment of people linked to Petrocaribe without admitting they are guilty of anything," Prime Minister Jean-Henry Ceant said at a news conference.

"The courts will say who is guilty and who is not."

The move came five days after tens of thousands of people took to the streets in Port-au-Prince and other cities to protest corruption.

Investigations by the Haitian Senate in 2016 and 2017 concluded that nearly $2 billion from a Venezuelan aid program called Petrocaribe were misused.

Through Petrocaribe, Venezuela for years supplied Haiti and other Caribbean and Central American countries with oil at cut-rate prices and on easy credit terms.

A dozen former cabinet ministers were implicated, including the two officials removed from office on Monday.

The Senate's findings, however, led to no legal or government actions, prompting the rise of a civil protest movement called Petrocaribe Challenge demanding that the government explain what happened to the money.

"We are going to create an independent commission to investigate the truth of Petrocaribe," Ceant told journalists.

He said a foreign firm will be chosen by the commission to trace the Petrocaribe funds and find out what happened to the money and how to recover it.