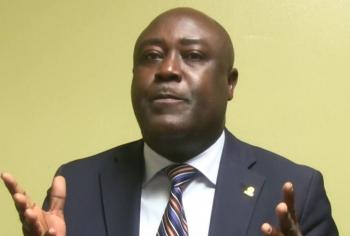 Sen. Evallière Beauplan (above) led a commission of inquiry which detailed years of corruption and no-bid contracts through which private corporations profited from the PetroCaribe program. Credit: VOA

In October, an audit commissioned by five members of the Haitian senate—led by Senator Evallière Beauplan—was released to the public. It detailed years of corruption and no-bid contracts through which private corporations profited from the PetroCaribe program. Those implicated include Laurent Lamothe, prime minister under former President Michel Martelly, whose handpicked successor Jovenel Moïse is now President.

PetroCaribe consists of a set of agreements between the Venezuelan government and individual Latin American and Caribbean governments, providing oil under a long-term payment plan. In Haiti’s case, the government has up to 90 days from the date of each delivery to pay Venezuela a small amount of the bill, but can pay the remainder over 25 years with only 1 percent interest. The plan is structured so that the Haitian government can take in revenues quickly by selling the oil domestically, and then have use of the money for public works projects because of the long repayment repayment schedule. The priorities are supposed to include agriculture, education, public works, sanitation and the environment.

Haiti signed its agreement with Venezuela in May 2006, two years before a series of hurricanes (Gustav, Hanna, and Ike) wracked the country in 2008. The audit—conducted by 50 professional auditors in nine teams, assisted by two engineers and a lawyer specializing in financial crimes—looked at the results of dozens of public works projects undertaken after those storms and the 2010 earthquake. The audit period was from September 2006 to September 2016, ending before Hurricane Matthew.

The first emergency law, passed on September 9 2008, suspended all legal requirements about public bidding processes, allowing the government to issue no-bid contracts “which it judges necessary.” It also eliminated the requirement that all contracts be submitted for prior review by the Superior Court for Accounting and Administrative Disputes (CSC/CA). A law passed in April 2010, after the earthquake, purported to reform these measures by allowing for after-the-fact CSC/CA review and “expeditious” public bidding processes.

Because the Haitian government controls both the sale of the imported oil and the issuance of funds for public works projects, avenues for corruption exist in both directions. The audit shows, for example, how accounts receivable for the PetroCaribe program went from 29 billion Haitian gourdes in 2015 to 43.7 billion in 2016.

Nearly one-fourth of the money (12.2 billion gourdes) owed to the Haitian government by private fuel companies in 2016 was in the hands of Sogener (Société Générale d’Energie), part of a corporate group which deals in real estate, construction, auto parts and electricity. The group’s CEO, Jean Marie Vorbe, is one of the founders of the Haitian Stock Exchange.

The audit encountered confusion because the Haitian government valued some accounts in dollars and some in gourdes, and because it used wildly inaccurate exchange rates (ranging from 70.35 and 107.35 gourdes to the dollar on 9/30/16, compared to the official rate of 65.5368). Nonetheless, the auditors valued Sogener’s outstanding debt—essentially, free money for the company to use elsewhere—at US174 million. The PetroCaribe agreement stipulates that companies are supposed to pay such debt within 30 days.

The second-in-command of the Vorbe Group, Réginald, accompanied Moïse on a trip to Europe last week, during which the president boasted to the French business federation MEDEF that Haiti is “27,750 square kilometers of opportunities to invest and make money.” He promised French investors a period of 15 tax-free years of revenues, along with the possibility of not having to pay payroll taxes.

During the audit period, Haitian government debt doubled because money due to the Venezuelan government is treated as debt, despite the program’s intended purpose of using the funds for public works. As of 9/30/16, Haiti owed Venezuela US$80,633,024.

In another case, the Dominican corporation Ingeniería ESTRELLA was given a contract of nearly US$20 million by the Martelly/Lamothe government to build an airport on Ile-à-Vache, which it was trying to develop as a resort for rich tourists. Le Nouvelliste visited the island recently and found that, although the company had pocketed more than $5.2 million in revenue, work on the project ended more than two years ago and left behind an unpaved landing strip half the size contracted for. No planes have been able to land on it.

In 2014, Lamothe gloated about such projects: “as far as the future tourists are concerned, it is worth it to know that the money that you are spending while having fun is helping someone to get out of poverty … This should be very rewarding, and that is what I call a tourism of solidarity.”

In an even more blatant crime, the government spent US$3.6 million worth of funds earmarked for earthquake relief on 100 Haitian National Police (PNH) vehicles in 2010.

The audit also found that the public electricity utility EDH (L’Electricité d’Haïti) awarded a contract worth a total of US $72.9 million to a company called ESD Engineering and Services SRL without approval from the CSC/CA, the Commission Nationale des Marchés Publics (CNMP), or the Administrative Council of the Office of Monetization of Programs of Aid and Development (BMPAD).

The release of the audit has provoked bitter infighting among Haiti’s ruling elite.

In Europe last week for the Paris climate summit and subsequent meetings with the European Investment Bank, Moïse made a public statement complaining of “political persecution” and claiming that the Haitian judiciary had recently forced him to renew the appointments of 50 corrupt judges. Haiti’s Superior Judiciary Council (Cspj) responded with a statement accusing Moïse of “putting in peril the independence of the judiciary power,” of “discrediting … the principle of the separation of powers” and of making a statement that was “incompetent and irresponsible.”

For his part, Senate President Latortue is posing as an opponent of corruption but has a sordid history. A former death squad leader implicated in drug smuggling, he was described in a US State Department cable released by Wikileaks as “the most brazenly corrupt of leading Haitian politicians.” According to Haiti Liberte, Latortue launched his first run for elected office in order to gain immunity from criminal prosecution.

Senator Beauplan is part of a group of ten senators whose terms would normally end in January, but whose absence would reduce the size of the Senate by one-third. Nineteen senators are required for a quorum, and only 20 would be available if Moïse unseats the ten in revenge for the report. No new Senate elections are scheduled until the fall of 2019.

At a time when street protests and the judiciary are calling for Moïse’s ouster, the US government is taking up the issue as well. Section III of the audit admits that it was conducted because of public anger at and press reports of corruption. At a cocktail party attended by Latortue this month, US Chargée d’Affaires Robin Diallo told Le Nouvelliste that “concrete actions are needed to have a Haiti without corruption. One has to have a program, a vision.” This scolding of Moïse is in line with the US government’s “vision” of keeping the Haitian bourgeoisie in power.