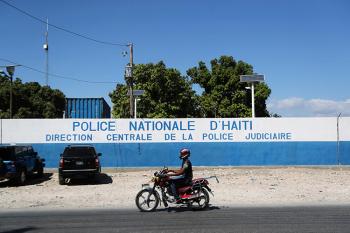 The Committee to Protect Journalists today condemned a shooting attack on Haitian journalist Kendi Zidor in Port-au-Prince and urged Haitian authorities to investigate threats to Zidor and bring the perpetrators to justice.

On the evening of July 16, three unidentified men on a motorcycle, two of whom were armed with guns, attempted to force Zidor to pull his car over while he was driving home and, when he refused, shot at him, Zidor told CPJ via phone. The shots hit the journalist's car but he escaped unharmed, Zidor said.

Zidor, who works as a commentator for television outlet Téle Pacific and daily newspaper Le National, told CPJ he has received death threats via text message since publishing an editorial critical of local authorities in May.

"This attack on journalist Kendi Zidor and the threats against his life clearly illustrate the dangerous conditions for journalists in Haiti," said CPJ South and Central America Program Coordinator Natalie Southwick in New York. "Haitian authorities must step up efforts to respond to and investigate incidents of violence against the media, and ensure those responsible are brought to justice."

On May 23, Zidor published an editorial in Le National criticizing Haitian authorities' handling of investigations into the so-called La Saline massacre, in which dozens were allegedly tortured and killed in November 2018.

In one threatening text message sent to Zidor following the editorial's publication, which CPJ reviewed, an unidentified individual told the journalist that if he continued writing about the massacre, he would "get what you deserve" and said, "When you do see me, I will be the last person that you will see."

On June 13, Zidor filed a complaint with the police over the threatening messages, showing them screenshots of the texts, and filed another complaint on July 19, following the shooting, he told CPJ. He said that he has not received any information from the police regarding either complaint.

Today, CPJ called the Haitian Judicial Police for comment; the person who answered told CPJ they were simply in charge of answering phones and were unable to provide any information on Zidor's case or to direct CPJ's inquiries to anyone with relevant information. CPJ was unable to contact the Haitian National Police through the force's website, which displayed an error message.

Since the beginning of 2019, at least one journalist has been shot and another killed in Port-au-Prince, according to CPJ research. CPJ is investigating the killing to determine if it was connected to the journalist's work.