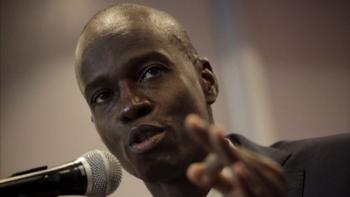 Mother Nature seemed to be sending President Donald Trump a warning when two tremors shook Haiti this week. A magnitude 4.5 earthquake, with an epicenter about 62 miles south of Aux Cayes, struck at 8:12 a.m. on Jan. 8, and a magnitude 3.19 tremor, with an epicenter 11 miles southwest of Port-au-Prince, came at 1:46 p.m. the next day.

As Haiti approaches the eighth anniversary of the devastating Jan. 12, 2010 magnitude 7.0 earthquake which leveled much of Port-au-Prince and Léogâne, the new temblors have unnerved people.

Some 60,000 Haitians found Temporary Protected Status (TPS) in the U.S. after the 2010 disaster. Over the objections of hundreds of elected officials, human right groups, and experts, the Trump administration has terminated Haitian TPS as of Jan. 22 and given the 60,000 until July of next year to win permanent residency or go back to Haiti, which has still not recovered from the quake nor from many severe storms and hurricanes in the intervening years. (Last week, the Trump administration also cut off TPS to 262,000 Salvadorans, giving them 18 months to pack their bags too.)

Not to be outdone, Haiti’s eastern neighbor, the Dominican Republic, also expelled over 110,000 Haitians and Dominicans of Haitian descent during 2017. About 58,000 of those expelled were arrested in anti-immigrant dragnets carried out in towns like La Romana, Puerto Plata, Boca Chica, La Vega, and greater Santo Domingo, the capital. Haitians represent 99% of those expelled from the DR last year.

None of these problems were mentioned when President Jovenel Moïse gave a glowing account of his accomplishments during his term’s first year, despite a dismal record and growing hunger, discontent, and demonstrations. In his traditional State of the Nation address at Parliament’s Jan. 8 opening, Moïse above all touted his “Caravan for Change,” a traveling pep rally – sometimes scornfully called the “Carnaval for Change” – which has delivered only promises despite costing the impoverished nation millions, much of which is suspected of going into cash slush funds to bribe or pay-off local officials. It’s difficult to get a clear picture, however, because the respected heads of Haiti’s two anti-corruption units were illegally supplanted by Moïse cronies in July.

This did not stop Moïse from denouncing corruption as “the absolute evil, the gangrene that afflicts our country” and “a crime against development and the Haitian people’s best interests.” He did back off a previous statement in December that he “alone” can vanquish corruption. “This fight is not only the executive branch’s business,” he said. “Parliament must provide the legal arsenal; and the judiciary must punish offenders.” However, in early December, when some in Parliament sought to start prosecutions against officials (many of them members or friends of Moïse’s administration) implicated in an October Senate corruption investigation’s report, the president apparently sabotaged the effort.

Perhaps this is why the National Carnaval Committee last week changed the official slogan of this year’s Carnaval, which begins Feb. 11, to “Haiti is on the road to change,” rather than the more provocative “This is Haiti as it should be,” which had been adopted in November.

Haiti’s Finance Minister, Jude Alix Patrick Salomon, recently declared that soon the government would again hike the gas price, which is already at $3.42 a gallon, compared to an average $2.77 a gallon in the U.S.. Last week, gas prices on the black market had soared to about $9 a gallon due to a fuel shortage, but a tanker delivered 250,000 barrels of oil in Port-au-Prince on Jan. 5, said Fils Aimé Ignace Saint-Fleur, the director general of the Office of Monetization of Programs for Aid and Development (BMPAD).

Haiti gets over half a million barrels of oil monthly from Venezuela under the PetroCaribe accord, for which it only has to pay 60% up front. But even with this discount, Haiti is in arrears for over a year of payments totaling more than $20 million, money beseiged Venezuela could sorely use. The other 40% of gas receipts go into a PetroCaribe fund (repayable over 25 years at 1% interest) to carry out projects for the Haitian people. But the account’s $2 billion has been wasted and disappeared, mostly during the regime of President Michel Martelly, Moïse’s predecessor and mentor.

Jovenel Moïse came into office under indictment for laundering millions through his banana exporting business, Agritrans, from 2007 to 2013. Were the millions he allegedly laundered from drug trafficking, kidnapping, embezzlement, or.... the PetroCaribe fund? His political allies in Haiti’s anti-corruption units and the Parliament have never investigated the matter and likely never will. It puts these words from his Jan. 8 address in perspective.

“I intend to intensify the fight against corruption, embezzlement, and theft of State property... I announce to you that these people who violate the laws of the Republic will be prosecuted and punished... I remind you that the exercise of political power, having the status of a civil servant, or being a member of one of the three branches of the State does not give anyone carte blanche to steal, take part in bribery, smuggle, or wreak havoc in the streets of the Republic.”

Most alarming is that Jovenel Moïse has resurrected the Haitian Army, which has historically been used to quell revolt, not repel invaders, and plans to establish a Permanent (rather than Provisional) Electoral Council, which might allow his Haitian Bald-Headed Party (PHTK) and its allies a 10-year headlock on elections.

In 2018, “we have to fight impunity, corruption, and all the corrupt authorities running the rotten State until we can uproot the rotten State,” said the January 22 Movement, a coalition of progressive popular organizations said in a Jan. 4 declaration. “Instead of the PHTK power bringing a solution, we see they are worsening the situation by plundering State coffers, liquidating our nation’s wealth, and then covering the thieves, contraband peddlers, and kidnappers with a cloak of impunity. Instead of a solution, it’s a Caravan of Lies which authorities bring to the people everywhere they go.”