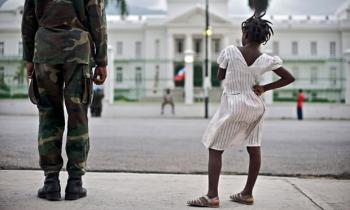 A young girl stands next to a UN soldier in front of the National Palace in Port-au-Prince, Haiti. Photograph: David Zentz/Alamy

The mothers of Haiti’s “peacekeeper babies” have filed the first legal action against both the UN and individual peacekeeping soldiers in paternity and child support claims.

The lawsuit is the latest development in a protracted legal battle to make the soldiers contribute to the upkeep of children they allegedly fathered.

One mother claims she was raped while another was aged 17 when she gave birth, which amounts to statutory rape under Haitian law. The lawsuit has been brought by human rights group Bureau Des Avocats Internationaux (BAI) and the Institute for Justice and Democracy in Haiti (IJDH).

Lawyers allege that the 10 women were sexually exploited in some form by the soldiers, and should therefore receive support. At the centre of the case are 11 “peacekeeper babies”, between five and 11 years old, all of whom are living with mothers struggling economically.

The alleged fathers are scattered around the globe, having returned to their homes in Uruguay, Sri Lanka, Nigeria and Argentina, making it difficult to proceed with claims.

Lawyers said they brought the lawsuit after the UN failed to respond to requests for the results of DNA tests and other details that would help with child support claims.

Nicole Phillips, a lawyer working on the case at the US-based IJDH, said: “Having and then abandoning children is not within the official capacity of a UN peacekeeper and therefore we argue that this does give a Haitian court jurisdiction to resolve paternity and child support claims.”

She said the mothers are extremely impoverished and face discrimination, stigma and the heartache of being abandoned to look after their children alone.

The UN mission, sent in 2004 to stabilise political turmoil , left the island in October this year. It has been dogged by controversy, including allegations of sexual abuse and the introduction of cholera to the island. In December 2016, the UN finally admitted its peacekeepers were responsible for importing the disease, which is estimated to have killed almost 10,000 people.

The women claim they were neither sent the results of tests, nor provided with any form of ongoing child support. Shortly after she gave birth, one mother was sent $350 (£260) by the Uruguayan soldier who fathered her child. She has since received nothing from him.

Six of the mothers were left homeless after Hurricane Matthew devastated the island last year and are struggling to bring up their children, said Mario Joseph of BAI.

Joseph said he hoped the cases would “challenge the UN to conform to its own principles and its promises to better address the sexual exploitation and abuse committed by peacekeepers in Haiti and worldwide”.

The UN secretary general, António Guterres, personally promised to “end impunity for those guilty of sexual exploitation and abuse” at a September meeting on peacekeepers’ conduct.

Farhan Haq, deputy spokesperson for the UN secretary general, said the organisation would liaise with the countries the alleged fathers come from, and request that paternity and support claims be addressed. He said responsibility rests with “individuals who have been established to have fathered children”.

In a statement sent to the Guardian, Haq said: “However, the UN itself cannot legally establish paternity or child support entitlements and, as indicated in the existing policy adopted by the general assembly, compensation is a matter of personal accountability to be determined under national legal processes.”

The IJDH and BAI are also involved in mobilising support for cholera victims in Haiti after the UN promised to raise $400m to support those affected.