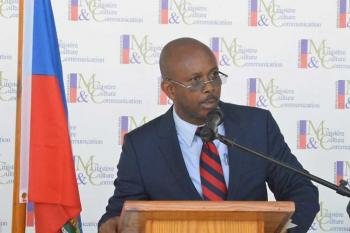 As of May 7, interim Prime Minister Jean Michel Lapin had not finished selecting his cabinet, possibly auguring trouble with Haiti’s deputies who dispatched his predecessor, Jean Henry Céant.

Less than two days before presenting his political statement to the Senate, Prime Minister Jean Michel Lapin has not finished selecting his cabinet this Tue. May 7, confirmed Gary Bodeau, the Chamber of Deputies’ president.

Bodeau criticized President Jovenel Moïse for forming a government without taking into account the deputies. He threatened to take control of the situation and give the country a direction that facilitates the release of international aid.

After Lapin’s appointment, consultations began with the different political parties to form a consensus administration.

According to sources close to the Presidential Palace, the moderate opposition could obtain up to seven ministerial posts, and only two of the current ministers would remain in their posts in the new government.

However, deputies were not involved in the whole process in which Parliament is an indispensable actor, according to Bodeau.

“Moïse can’ t try to resolve the crisis in an agreement with eight political parties, most of which have no elected representatives either in Parliament or elsewhere,” the Lower House president told the daily Le Nouvelliste. He noted that the International Monetary Fund (IMF) is waiting for the government’s formation and the vote on a budget to begin to release its $229 million loan promised to Haiti.

Sen. Jacques Sauveur Jean, a member of the Parliamentarians for the Defense of Democracy bloc, said that Lapin’s political declaration presentation is not yet certain because the deputies do not yet have the government’s composition.

Last week, the Senate’s president, Carl Murat Cantave, announced on his Twitter account that Lapin had until Tuesday (May 7) to deliver the list of upcoming ministers and their documents, as part of the preliminary research that legislators are conducting for the validation session.

So far, it has not happened, although according to the newspaper Le Nouvelliste, the president is still trying to convince political parties and personalities to join the new government.