Haiti’s new government has been set up for failure 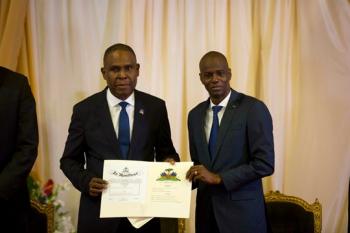 Months after deadly riots in Port-au-Prince forced the resignation of Haitian Prime Minister Jack Guy Lafontant, a new government is finally in place. But newly sworn-in Prime Minister Henri Ceant faces a slew of roadblocks, including a major corruption scandal and a yawning budget deficit. Ceant also lacks previous administrative experience and is viewed with suspicion by much of the Haitian political elite. In an email interview with WPR, Francois Pierre-Louis, a former Haitian government official who is now a professor of political science at Queens College, the City University of New York, explains why the new government in Port-au-Prince is ill-equipped to tackle Haiti’s many pressing challenges.

World Politics Review: What accounts for the delay in putting a new government in place after Lafontant’s resignation in July, and what led to the appointment of Ceant as his successor?

Francois Pierre-Louis: The riots that took place in Haiti on July 6 and 7—triggered by the government’s decision to end annual fuel subsidies, effectively raising the price of fuel by 50 percent—were unprecedented in the annals of popular uprisings in Haiti. This was the first time since the fall of Jean-Claude “Baby Doc” Duvalier in 1986 that rioters targeted businesses in a wealthy suburb outside the capital, Port-au-Prince. Most of the businesses targeted by rioters were hotels, car dealerships and supermarkets that are owned by the country’s elite—primarily foreigners and light-skinned Haitians. The scope of the riots and the absence of law enforcement in the streets during those two days highlighted internal disagreements and a lack of coordination in the government over the decision to end the fuel subsidies. President Jovenel Moise was ambivalent about the measure, but in the end, three Cabinet ministers moved forward with the announcement without consulting the chief of police or the president’s staff. Lafontant’s administration, widely seen as aloof and ineffective, was paralyzed as a result, but Moise did not want him to resign. Moise was happy to have a weak prime minister because it gave him the opportunity to play the role of president and prime minister at the same time. Nevertheless, he was forced to accept Lafontant’s resignation due to the fallout from the riots.

Moise took a long time to select another prime minister because his allies in Parliament could not reach consensus on a candidate. Although Moise has a parliamentary majority, his allies do not necessarily follow his leadership, and all the influential lawmakers had their own candidate for the position. After two months, the private sector forced Moise to select a new prime minister, and he settled on Henri Ceant, his rival in the 2016 presidential election. The private sector believed he would be the best candidate to appease the population and reach out to the opposition. But Ceant’s nomination, designed to boost the president’s popularity, has only led to a further erosion of Moise’s authority.

WPR: To what extent will the new government be hampered by the ongoing corruption scandal over alleged misuse of funds from Venezuela’s PetroCaribe program?

Pierre-Louis: Ceant is a respected lawyer and public notary in Haiti who took on the prime minister’s job promising to do better than his predecessor. However, the scandal over the misuse of $3 billion from the Venezuela-linked PetroCaribe fund—which has allowed Haiti, like other Caribbean states, to buy discounted oil from Venezuela—and Moise’s lack of effort to address this issue will severely affect his administration. Since Ceant took office, there have been daily protests in the streets, demanding that the government thoroughly investigate.

Ceant will encounter other obstacles as he begins to implement his policies. First, he was the president of a political party that advocated a different approach than Moise on many policy issues. Second, Moise is a protege of former President Michel Martelly, while Ceant was known for a long time as the eminence grise of former President Jean-Bertrand Aristide. Ceant broke with Aristide after he was overthrown in 2004, but he relied on members of Aristide’s Fanmi Lavalas party in the 2016 elections. These supporters will definitely pressure him for patronage jobs and government contracts. Third, Haiti is currently facing a major budget deficit that has fueled rising inflation and the devaluation of the currency. With no money in government coffers, he will be unable to fulfill many of the promises he made to Parliament members in order to obtain their approval. Fourth, it is believed that Ceant has not given up on his presidential aspirations. Moise’s supporters view him as someone who came in to undermine the president’s mandate. Therefore, it is not clear how hard Moise will work to support Ceant’s agenda, since the failure of his government would work in Moise’s favor by hobbling a potential rival in future elections.

WPR: Overall, how well-positioned is Ceant to handle Haiti’s financial woes, as well as its myriad other policy challenges?

Pierre-Louis: Ceant has no prior experience in public administration and he is taking over a system that is known to be corrupt and ineffective. The state agencies that bring in most of the government’s revenue—such as the ports, customs agencies, tax offices and insurance companies—are controlled by powerful senators and Moise allies. Ceant would have to rein in these agencies by getting rid of Moise’s allies in order to clean up the financial mess that the country is in. If he moves in that direction, Parliament would probably give him a vote of no confidence and remove him from office.

The funds from PetroCaribe were the lifeline of Haiti’s public spending program for the past decade. Since these funds have dried up and there is little hope of foreign aid coming to rescue the government anytime soon, it will be very difficult for Ceant to provide jobs, quality education and reforms to the judicial system and the public sector. His lack of governmental experience, the fact that he is not trusted by Moise’s supporters, and the lack of resources to implement his agenda have set him up for failure.