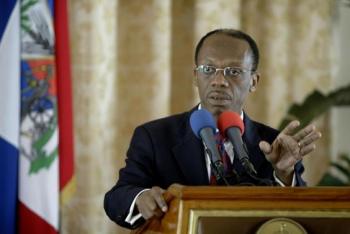 Aristide had pleaded to the international community to save him (Getty)

It was never Jean Betrand Aristide’s wish to leave Haiti. In the early hours of 29 February 2004, with rebel forces advancing on Port-au-Prince and opposition leaders refusing a compromise, he was given a blunt offer from Luis Moreno, deputy chief of the US embassy.

“Come with or stay,” he was told by the diplomat, who arrived with a contingent of US Marines. “Live or die”.

Had Washington wanted to save the priest-turned politician who became Haiti’s first democratically-elected president, it could have done so. A decade earlier, after Aristide was forced out by a CIA-backed coup, Bill Clinton returned him to office using those same Marines.

But by 2004, the US was done with the man who preached liberation theology, sought to raise wages in a nation that had become a sweatshop for the US garment industry and resisted demands from the International Monetary Fund to “liberalise” the economy. That Leap Day morning, Aristide was hurried to a jet and flown into exile in the Central African Republic.

Is Haiti a “s**thole”? Some Haitians might actually agree with the reported comments of Donald Trump. Life is undeniably tough in the poorest country in the Western Hemisphere. While it sits just a 90-minute flight from Miami, things could scarcely be more different. Three-quarters of the population lives on less than two dollars a day and a full 50 per cent on just one dollar. Only sub-Saharan Africa is poorer.

Haiti has the proud history of being the only nation created by an uprising of slaves. But since that revolution culminated in the country’s independence in 1804, democracy has struggled in the former French colony.

Between 1956 and 1986, the country was dominated by the murderous dictators Francois “Papa Doc” Duvalier and his son, Baby Doc. Four years after Baby Doc fled to France, it seemed that Aristide, who swept to power with 70 per cent of the vote, was poised to bring change. So he might, had he not antagonised the country’s small elite or their supporters in Washington.

If Donald Trump was interested in history he would know this. He would know the challenges Haiti has faced, and the way his own country has hampered its development. He would know how, even now, the US Embassy and State Department are major player in the country’s politics, throwing their support behind those candidates it approves of, and blocking the path of those it does not like.

“The US has spent a lot of energy over the last 100 years in preventing the emancipation of ordinary Haitians citizens and every time there was a chance of this it was blocked,” said academic Peter Hallward, author of Damming the Flood.

If Trump was interested in history, he would also know the role the US has played in El Salvador, a country to which he now wants to return 200,000 people who fled here to avoid poverty and violence and were given temporary protective status (TPS). He would know that in the 1980s more than 75,000 people were killed and another 10,000 “disappeared” during its civil war, between a right-wing government supported by the US and leftist rebels.

He would know that today El Salvador is one of the deadliest countries in the world outside of an recognised war zone, a place with up to 70,000 active gang members most of them aligned to two main outfits – Mara Salvatrucha, or MS-13, and Calle 18.

The gangs were originally established in the Los Angeles’s extensive prison system.

During the 1990s, many gang members were deported to El Salvador, which was still recovering from the civil war. Since then, they have established strongholds throughout the country and are involved in extortion, people trafficking, robbery and prostitution. They are also major players in the drugs trade, fuelled by Americans’ passion for cocaine.

Given the peril faced by youngsters in three Central American countries, Barack Obama in 2014 established a programme to provide a safe-entry for children from Guatemala, Honduras and El Salvador, whose parents were already living legally in the US. Last summer, Trump terminated the scheme.

Trump has denied he used vulgar language to describe Haiti or African countries, but Democrats at the meeting insisted he did use such words.

What’s clear, is that while Trump defends his actions by claiming he is putting America first, he is blind to the fact that America’s behaviour in its “back yard” on Central America has frequently hampered the development of those countries or worse. If he bothered with history, he’d know how s**tholes come about.