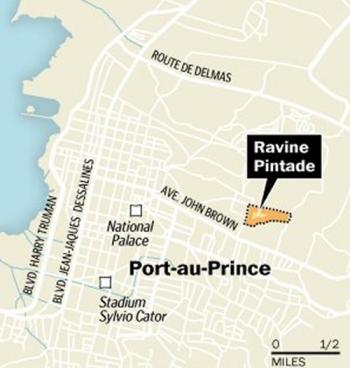 In one of Haitian capital’s roughest neighborhoods, a pretty good second chance

By David Brown, Washington Post, August 18, 2012
In PORT-AU-PRINCE, Haiti — In helping give birth to modern cities, disaster has been a useful, if cruel, midwife. In the months following Haiti’s massive earthquake in 2010, people hoped it might be true here, too. There was plenty of precedent.

The Chicago fire of 1871 left one-third of the city’s population homeless. The city’s economy, however, grew faster in the year after the fire than in the year before it. The earthquake and fires that struck San Francisco in 1906 destroyed 28,000 buildings. Almost overnight, it cleared vast areas on which a healthier and more handsome city was built.

By now, though, it seems unlikely that Haiti’s capital will be similarly transformed by the earthquake that damaged or destroyed about 180,000 buildings in the metropolitan area. The best intentions and money pledged will not come close to what is needed to turn Port-au-Prince into a modern city with wider streets, bigger houses, more public space, and water and sanitation for all.

But one neighborhood, Ravine Pintade, gives a hint of what is possible on a small scale. It has been transformed.

A giant pile of rubble — bigger in volume than the Washington Monument — has been carted away. The ravine’s slopes have been stabilized with 7,900 feet of retaining walls. Nearly 8,000 feet of buried pipe carries rainwater that used to sluice through the streets. The footpaths that residents used to joke were “too narrow for a rat to get down” are now four feet wide.

More than half the community’s 900 families have a new house or had repairs done to the one they were in. Almost every new dwelling has a system for capturing rainwater for washing and bathing. People can buy potable water for a small price from five community-run kiosks. Groups of houses share 23 septic tanks and 100 bucket-flush toilets, which can be locked for privacy. Twenty solar-powered lights illuminate streets.

No one would call the rebuilt Ravine Pintade a model neighborhood. But it is far better than it was. More important, it is a product of Haitian planning and labor — and is what the residents wanted in almost every detail, including the not-very-good ones.

“There are a lot of people spending a great deal of time planning unrealizable actions,” the project manager, Aram Khachadurian, said of the past two years of Haiti rebuilding. “The balance of planning and doing should be shifted more in the direction of doing, even now.”

Khachadurian, 55, works for CHF International, a charity based in Silver Spring that was originally called the Cooperative Housing Foundation. He was previously a banker, a real estate developer and a regional planner for New York City.

Named “Katye” — the Creole word for “neighborhood” — the project was paid for with $8.5 million from the U.S. Agency for International Development. CHF and another nonprofit, San Diego-based PCI (formerly Project Concern International), were the “implementing partners.”

The project employed about 55 people — only four were non-Haitians — and provided $1.4 million in direct economic stimulus to the community. The most visible change is 260 new one-story dwellings and 75 two-story ones. Steel-framed, with wood and composite walls, they are expected to last at least 25 years. Less apparent but equally important, Khachadurian said, is the “local ownership” — something many projects pay lip service to but few achieve.

“We had quite a different approach,” he said. “Everybody was involved in everything.”

Roughly $12.4 billion has been pledged in private and international post-earthquake aid to Haiti through this year. At least a third of that total went toward emergency relief for earthquake victims: food, water, shelter, medical care and cash.

Whether the rest of the aid would have been enough to turn Port-au-Prince into a modern city is uncertain. The reconstruction of Chicago, San Francisco and many other disaster-damaged cities was financed by economic growth, not charity. Haiti’s stagnant economy assured that was not going to happen here. But there were other reasons, as well.

Less than a quarter of recovery aid (which could pay for long-term rebuilding) went to Haiti’s government, according to an analysis by the Center for Global Development, a Washington think tank. Charities, non-governmental organizations and contractors continued to be the main conduits for help and money. That has been true for decades, thanks to the country’s legendary instability and reputation for corruption. (Since 1806, 56 presidents have served, with fewer than a dozen completing their terms.)

Governance has continued to be difficult. The current president, Michel Martelly, has had two prime ministers since taking office in May 2011.

Most experts say that a well-funded, strong national government — or its equivalent, such as an occupying army — is necessary to execute projects such as repaving streets, laying water and sewer lines, and forcing changes to lot sizes. “Because the money went to NGOs, I don’t think it was ever realistically an option” to modernize Port-au-Prince, said Vijaya Ramachandran, an economist at the Center for Global Development and co-author of the report. “NGOs don’t work at the level of rebuilding cities.”

Her fellow author, Julie Walz, added, “You can’t rebuild an entire city through one project here, one project there.” But you can rebuild a neighborhood.

Ravine Pintade is a 40-acre, V-shaped gash in the hills above downtown Port-au-Prince. It was poor and dangerous before the earthquake. The disaster did not make it more prosperous or safe. Rebuilding the area was a high priority for Haiti’s government because it was heavily damaged and many of the residents were living in a displaced-persons camp in a downtown park.

However, there was only enough money to rebuild one side of the ravine. The north side was chosen because CHF and PCI had “strong existing community relationships” there, Khachadurian said. As it turned out, that asymmetry was the source of recurrent trouble during the 17 months of reconstruction.

Participation was voluntary. People were not forced to get new dwellings if their own house was salvageable and they wanted to fix it up. Residents were consulted about design and were expected to find solutions to showstopping problems. When the project was finished in May, maintenance of common spaces and infrastructure became the residents’ responsibility.

The project engineers started with a test plot in which 30 house lots were cleared and new dwellings were built while the residents lived on-site in tents. It quickly became clear, however, that that strategy was not practical for the whole project. Hundreds of families would need to find temporary housing. “We met with the community and said: ‘We need to start work on this date. What do we do?’ ” Khachadurian recalled.

It turned out that most people had friends or relatives with whom they could stay. For the few who did not, tent sites would be found.

Another big problem was that wider paths and outdoor places to sit were neighborhood priorities but there was not any unoccupied land for them. As the project evolved, 201 households agreed to reduce the size of their plots, 171 agreed to reshape them, and 51 agreed to share their plots with another family by living in two-story houses. “New” land was also created by building vertical retaining walls where dirt slopes had taken up space.

“We were able to create huge changes in the public spaces, but it was adding up centimeters at a time,” Khachadurian said.

There were limits, however, to the project managers’ deference to local wishes. The plan called for six water kiosks, where the public could buy chlorinated drinking water. Space was found for five. The only place the community could agree on for the sixth was was in the middle of a widened and rehabilitated road. The engineers said no. There are only five water kiosks now.

Crime temporarily halted the project several times. South-side thugs forced a contractor at gunpoint to deliver sacks of cement to their side of the ravine, which was not part of the project. Someone robbed a contractor, again at gunpoint, as he distributed payroll. A south-sider stoned the construction headquarters, shouting that his neighborhood was being left out, and in return was severely beaten.

There were ongoing annoyances. Ralph Chery, the 39-year-old Haitian in charge of erecting the dwellings, said that in some parts of the neighborhood his crew had to work extra-long days and lug out uninstalled steel, cables and plywood each night.

“Not everyone in the neighborhood is a beneficiary,” he said, noting that thieves lived on both sides of the ravine.

Khachadurian, who speaks French and Creole, visited the south side several times and did some rubble removal there as a gesture of goodwill. He told the residents he understood their resentment. He said he would try to get a project for their half of the ravine, too.

In December, one of the Haitian engineers was kidnapped. Work was halted again. For three days and nights people from both neighborhoods looked for the man. The searchers included the stone thrower and a man who had once come into the project office courtyard wielding a machete. On the fourth day, after his family paid ransom, the engineer was put out of a car on a nearby street, shaken but unhurt.

That night, people from both sides of the ravine gathered in the courtyard to welcome him back. (The current belief is the kidnappers, never identified, were not from either neighborhood.) It was a “West Side Story” moment, only with a happy ending.

“There was a triumphant look in their eyes,” Khachadurian said, choked with emotion at the memory. “I just felt the message coming from these people — ‘We’re going to have our conflicts, we’re not going to be totally honest sometimes, but in the end this is our project. You can count on us.’ And it really was true.”

CHF has a proposal pending with the World Bank for $10 million to do a Katye-like project on the south side of Ravine Pintade. It just got an invitation to come in and talk.