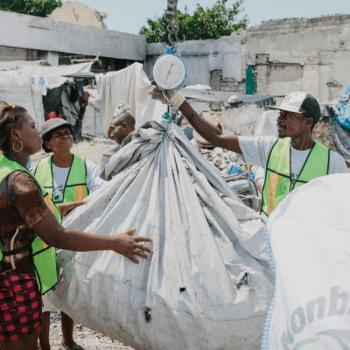 The blockchain is helping clean up the oceans. That’s thanks to the efforts of Plastic Bank, a non-profit that pays people in developing countries for handing over recyclable plastic using a cryptocurrency-like token system. The team has already been operating in Haiti for the past three years, and now tells Inversethey’re planning on expanding the concept to other countries.

The idea sounds like a gimmick at first, but using the blockchain has tangible benefits relative to more conventional compensation like cash. While the hype may have cooled off around Bitcoin since dropping from a high of roughly $20,000 per coin to just above $6,500 at the time of writing, developers are still finding new applications for the technology. Katz explained the blockchain is transparent, offers high security, and reduces many of the risks associated with handling cash. It also helps smooth out price fluctuations, creating a more sustainable economy.

“Many of the areas where they tried to introduce new recycling programs…it is largely children and women who are collecting the plastic, ocean and otherwise, and they would go to a reclamation center, and be mugged for the proceeds,” Marie Wieck, general manager of IBM Blockchain, tells Inverse. “There was a fair amount of crime associated with the redemption of money that wound up taking it away from the people who did the work.”

Rather than simply giving users an off-the-shelf cryptocurrency in exchange for their work, Plastic Bank worked with IBM to develop a custom-made solution. The team is using the Hyperledger Fabric enterprise standard, created by IBM and Digital Asset and hosted by the Linux Foundation, running on LinuxOne servers. Katz also claims the Plastic Bank app that helps collectors manage their tokens is the only French Creole app on the market right now.

The project allows collectors to choose between two tokens. One is a freely tradable token tied to the U.S. dollar, similar to Tether, that collectors can exchange with other people like a regular cryptocurrency, or exchange for fiat currency at the non-profit’s stores. The other is a token that can be exchanged for goods directly from Plastic Bank for essentials like school supplies, or a smartphone to manage the tokens and access the internet. The latter token enables the firm to strike deals with businesses looking to buy certain types of plastic or agree on a bulk price, which means it could hold more value than the freely tradable token.