‘How would I survive going back there?’ 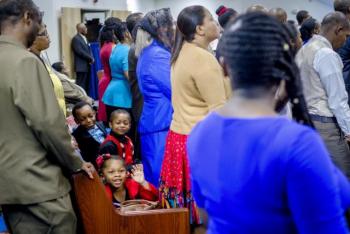 The woman wearing a mint-green dress with tiny pink flowers is trying not to cry.

She is explaining that she has Temporary Protected Status, which was granted to 58,000 Haitians after the 2010 earthquake that devastated the country. She had been living in the United States for more than a decade when the quake struck, but found herself a beneficiary of the program that allowed Haitians to stay.

So every 18 months, she renewed her status without much thought. Then came May, and an announcement from then-Homeland Security Secretary John F. Kelly. He told Haitian TPS holders that the program may soon come to an end. That they would be given a six-month extension, but they should prepare to leave the United States and return to Haiti by January 2018.

His reasoning: Things were improving in Haiti since the quake killed more than 230,000 people and did an estimated $14 billion in damage to buildings and roads.

Critics called the decision shortsighted. The effects of the earthquake are still visible. Many people still reside in tents and makeshift homes. A cholera outbreak followed in 2010, infecting at least 770,000 people and killing more than 9,200. And on Saturday, Hurricane Irma brought more heartache to the already devastated Caribbean island nation as reports of flooding began to surface.

But for the woman in the mint-green dress, struggling not to cry, her reasons for wanting to stay are much more personal.

The Washington area, where she has lived for more than two decades, is her home — and home to an estimated 800 Haitians with TPS. Her husband and 2-year-old daughter are there. Her job as a nurse is there. And her church, with its majority Haitian congregation, is there. So despite pleas from family and friends that she should follow the exodus of Haitians afraid of a return to Haiti and instead head to Canada, she will not.

“I think it’s lack of faith for me to get up and leave,” said the woman, who spoke on the condition of anonymity because she feared she would become an easy target for deportation. “I have two sisters and a brother in Montreal. They ask me to come every time. ‘People are coming,’ they say. I say, ‘Is it easy to pack up and come?’ It is not. I don’t want to hear people tell me that kind of stuff.”

‘Deep roots in the community’

An estimated 11 million people live in Haiti, the poorest country in the western hemisphere. A Category 5 hurricane like Irma could cause flooded roads and mudslides, which could destroy houses built on hillsides — a repeat of the devastation caused by the earthquake in 2010 and when Hurricane Matthew hit the country in October 2016.

The growing panic can be seen across the country. Haitian radio stations and other media outlets talk about the issue almost nonstop. Marleine Bastien, executive director of the Haitian Women of Miami, said that more than 32,000 Haitians with temporary status live in Florida. Many have been living in the United States for up to 20 years.

“We are talking about people who have deep roots in the community,” Bastien said. “These are people who own homes, who have reached the American Dream to own a home, and started business. Eighty-five percent of them are working.”

“I receive calls every day,” Bastien added. “ ‘Marleine, what should I do? Should I put my house to sale? Do I take my children to a country still reeling under remnants of an earthquake, a country where the entire south peninsula has been destroyed? Where people are dealing with food scarcity because Hurricane Matthew destroyed crops?’ ”

“The heart-wrenching questions the families are asking are difficult to answer,” she said. “How do you tell a parent what to do with U.S.-born children? How do you answer a mom sitting in front of you with tears in their eyes?”

“It is a sad situation. They don’t know what will happen,” St. Ulmé said. “ They don’t have anything in Haiti. They come here for a better life. They are afraid to go back.”

The woman in the mint-green dress is a member of St. Ulmé’s congregation. She and her husband, who is also in the country on temporary status, pray every morning before the sun comes up and again at night before midnight. It is the same prayer: That the U.S. government will not return to Haiti the more than 58,000 Haitians living here.

She was 18 when she left Haiti in 1995 on a visitor’s visa. “Since then, I’ve never been back. I have no house there,” said the woman, who is now 40. “I wouldn’t know how to live there. How would I survive going back there?”

She rubs her swollen belly. Her second child is due in three weeks.

Now she can no longer hold back her tears.

The health-care system in Haiti is terrible, she says. Patients wait on hospital beds with no sheets, clutching brown paper bags of medicine they brought with them, hoping doctors not stopped by strikes will see them. In Haiti, she said, “You call 911, the ambulance has no gas to come help you. There is no security. There is no place to render justice.”

Rony Ponthieux doesn’t want to go to Canada either, but the prospect of returning to Haiti is not one he can see. He has lived in the United States since 1999, and he and his wife were granted TPS after the 2010 earthquake.

While here, he has gone to school and become a registered nurse. Since 2015, he has worked at Jackson Memorial Hospital in Miami.

“I have two children born here,” Ponthieux said. “The eldest son is 16, going on 17. I have a girl who . . . spoke at Washington in Congress. She was giving some speeches. She is gifted. She just turned 10. She was champion spelling bee for her school.”

Moving to Canada would be a last option. “I heard the news. I see the borders. I don’t think it’s a good idea.”

But, he added, “Imagine children born here and go to a place with no pure water. No shelter. No food. No house in Haiti. It would be a bad situation.”