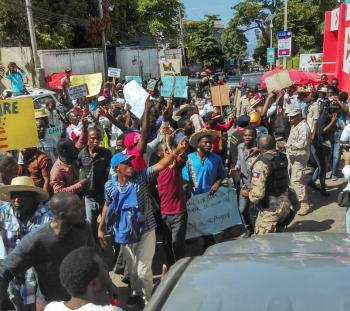 Hundreds marched through Port-au-Prince on Dec. 5, some with signs that read “Stop the Thieves!”

On Dec. 5, hundreds took to the streets of Haiti’s capital, Port-au-Prince, to denounce runaway corruption, as outlined in a recent Senate report on the plundering of the PetroCaribe funds set aside for social programs.

The march is part of a broader uprising which began in September with the proposal of an austerity budget. Weekly demonstrations now demand the resignation of President Jovenel Moïse, who came to power in controversial, anemic elections in November 2016.

Many of those who marched on Dec. 5 are militants of the nine popular organizations which make up the January 22 Movement or M-22. On Nov. 30, the M-22 issued its fifth position paper on the growing scandal over the misuse of about $2 billion from the PetroCaribe Fund, which was established to finance social welfare projects. We have translated the original text from Kreyòl. It summarizes the issues which continue to anger the Haitian people, keeping them in the streets.

The report’s conclusions so not surprise us. On the contrary, the report was not complete. There are many more corrupt people in both the state and private sector who are not mentioned in the report.

With this note, we are not rehashing much of the controversy around the report, as when members of the indicted president’s cabinet and other thieves say they are innocent and minimize the report. We will never see a press conference where a thief admits to everyone that he plundered the PetroCaribe fund. It’s not declarations over the radio or fancy presentations at big hotels which prove who is innocent or not. It is in court that the accused should prove whether or not they were implicated in plundering state coffers.

The January 22 Movement (M-22) clearly knows that corruption, theft, drugs, gangs, prostitution, poverty wages, and the exploitation of workers’ labor are all endemic to a blood- sucking system, the capitalist system. We can’t forget the close ties between our corrupt government, international institutions, and the capitalist powers.

To summarize, the Haitian Parliament (National Assembly) ratified the PetroCaribe Accord on May 15, 2006 under the government of [René] Préval - [Jean Jacques] Alexis. That accord was ratified by Venezuela’s parliament at the end of June 2007. Under the accord, the Venezuelan government sells the Haitian state 14,000 barrels of oil each day, and the Haitian state pays the Venezuelan state oil company (PDVSA) 60% of the bill up-front while 40% goes into the “PetroCaribe Fund,” a pot which incurs a debt payable over 25 years at 1% interest. But that 40%, under the accord, is supposed to go to building schools and roads, increasing agricultural production, and constructing housing for the poor.

From 2008 to 2015, the PetroCaribe accord generated revenues [for the PetroCaribe Fund] of more than US$2.2 billion. Of that money, $1.6 billion supposedly went to finance 385 projects. That money, released by 13 Resolutions [under two Presidents and several Haitian Prime Ministers], was reviewed by the Senate commission. That money was controlled by the “Monetization Office of Development Assistance Programs” (BMPAD), which is a public institution under the Economy and Finance Ministry. On BMPAD’s Administrative Council sits the Economy and Finance Minister, the Planning and External Cooperation Minister, the Commerce and Industry Minister, the Public Works, Transport, and Communications Minister, the Foreign Affairs Minister, the Central Bank’s Governor and Director General.

Thus, we can understand how someone like [former Foreign Affairs, Planning and External Cooperation, and Prime Minister] Laurent Lamothe had power over the PetroCaribe fund in all the posts he held. In 2012, the government established an enterprise called the “Pétion Bolivar Mixed Investment Company,” whose principal mission was to deal with Haiti’s electricity problems with money and long-term projects under the PetroCaribe Accord.

For the truth to continue to come out about the squandering of the PetroCaribe fund, principled organizations and citizens in the popular classes and the masses must come together to fight:

- For justice authorities to arrest all the mafia in the current government, and past ones, who plundered the PetroCaribe money. Thieves in and out of power should tried and then be locked up in the National Penitentiary. It is not the people who should pay for the stolen PetroCaribe money, as often happens when funds are embezzled from Haiti’s budget;

-For justice authorities and other empowered state institutions to deepen the inquiry and arrest the officials of all companies and other thieves whose names are not mentioned in the report of the Senate’s commission of inquiry. In this sense, justice must provide oversight of institutions like the “Pétion Bolivar Mixed Investment Company,” and their role in the mess made. The Higher Court of Accounts, UCREF, ULCC, and the justice ministry must shoulder their responsibility to shed light on all the expenses made from the PetroCaribe fund and arrest the thieves. Justice is not there only to judge petty thieves of potatoes and chickens. The big thieves and their accomplices who plunder the state coffers should be sanctioned and the state should seize their assets, to put them to doing public service. All of our towns are filled with all kinds of garbage. Those big thieves should render service to society by collecting that garbage, after justice convicts them;

Principled organizations in all sectors all over the country must gather together, reinforce themselves, put brigades together to monitor the thieves, continue to put out picture on the internet so the entire world can know the thieves, for their family to see them, so that humanity can know who is responsible for the Haitian people’s deepening poverty. We must fight until the corn is ripe with all the means we have for justice to arrest the thieves. What’s happening today is an historic opportunity for a path to complete liberation, for us to advance in building another Haiti without state thieves, without corrupters and corrupted, a society where the state is administered with real transparency, without the donkeys working while the horses prance.

Long live a just society! For justice and history, all the thieves of the PetroCaribe money should be judged!