‘I am alarmed,’ U.N. Secretary General says about 2018 Haiti massacre 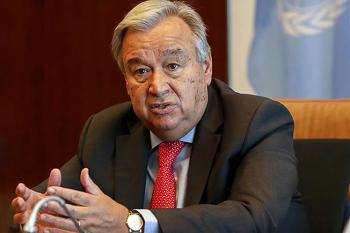 Haiti-based human rights organizations have put the death toll in La Saline as high as 71. U.N. investigators , who acknowledged that their probe was not exhaustive, say at least 26 people, including a 10-month-old and 72-year-old, were killed. The killings took place over two days and were “a well-planned operation” carried out by five different gangs, the U.N. said.

Witnesses reported that a Haitian government official, the appointed delegate for the West region, was seen in the company of police officers and gang members during the attack. One of those police officers had previously been implicated in another massacre in the Grande Ravine slum of Port-au-Prince a year earlier. As in La Saline, no legal proceedings have been initiated to date in relation to the Grande Ravine killings.

Guterres’ comments were presented in a report to the U.N. Security Council, which had requested the La Saline investigation. It paints a troubling picture of the overall situation of Haiti, which, on the eve of the exit by U.N. peacekeepers after 15 years, faces an upsurge in criminal gang activity, a deteriorating economic environment, successive waves of anti-government protests and corruption allegations against its president, Jovenel Moïse.

Without mentioning the word PetroCaribe — the Venezuela oil program at the center of two corruption reports implicating former Haitian government officials and three companies owned by Moïse before his February 2017 inauguration — Guterres acknowledged that Haiti’s Superior Court of Auditors and Administrative Disputes has shed light “on certain allegations” of embezzlement involving the program. However, he notes that little has been done to bring the perpetrators to justice and recover the embezzled cash.

The secretary-general called on Haiti’s Superior Council of the Judiciary to ensure that judges under its jurisdiction have the necessary independence to carry out proceedings, and asked Moïse to open talks on accountability.

Both requests are a tall, if not impossible, order considering that it’s unclear if the judiciary council has authority on judges it does not appoint, and given the fact that a majority of its members recently signed a public letter critical of Moïse after the corruption allegations surfaced in a May 31 report.

With Moïse accused of being part of the PetroCaribe embezzlement — allegations he has denied — and the target of an impeachment campaign in the Lower Chamber of Deputies, Guterres asks, how can the president appoint judges sufficiently independent who could end up indicting him?

There are only three months left before the U.N. is set to close its peacekeeping operations in Haiti, focused on judicial and police reforms, and transition to a political mission. But the secretary-general’s report raises uncertainty about what lies ahead, and whether the country will be able to go it alone.

Guterres acknowledges that the majority of the 46 benchmarks the U.N. Security Council had set as part of its peacekeepers’ exit strategy will not likely be achieved before October, and despite some progress, he remains concerned with the fate of the judiciary and the police.

Also while elections for entire Lower Chamber of Deputies and one-third of the Haitian Senate are set to take place in October, Guterres noted that there isn’t yet a budget and the electoral law remains stalled in Parliament.

Meanwhile, despite repeated calls by the international community for Moise to hold a national dialogue with his detractors, Guterres said none of the efforts “have borne fruit.”

“It is of utmost importance that a meaningful, comprehensive and inclusive national dialogue be held,” Guterres said.

“The recurring political crises of the past 18 months have represented an important impediment to the adoption of legislative measures essential for consolidating the rule of law, combating corruption and preparing elections,” Guterres added. “In spite of the extensive support provided by the [U.N] Mission in those areas, it is clear that measurable progress will only occur in a calmer political environment, in which both the executive and legislative branches of power function properly.”