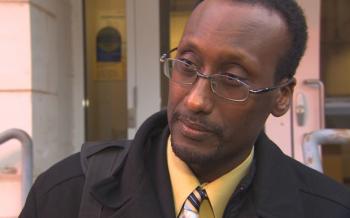 Renold Francisque wept as he stepped out of the Canada Border Services building in Edmonton.

A crimson growth on the side of his neck bulged over his shirt collar as he stared down at a letter that read to him like a death sentence.

For the past nine months, Francisque has been treated for tuberculosis. But his treatment may end abruptly on Jan. 2, 2018, if he is deported back to Haiti.

Canadian authorities believe Francisque, 54, was a member of a brutal Haitian militia. He has been rejected three times in his bid to stay in Canada. Francisque insists he has never been involved in criminal activity.

Last week's removal order leaves him with little time left to exercise his remaining legal options. But Francisque and his supporters hope his medical condition might change that.

Francisque's symptoms, including lymphadenopathy in his neck, have recently worsened, raising the possibility he has an "acquired drug-resistant disease," his infectious disease specialist wrote last week.

"We would consider it medically inadvisable for him to travel now," said his doctor. "He will require several investigations to better determine the extent of this ongoing TB and to plan subsequent treatment."

According to his sworn affidavit, Francisque said he first fled Haiti in 1996 after his refusal to join a violent political group put his life in danger.

He resettled in Florida but his refugee application was rejected.

In 2008, he crossed the border on foot into Saint-Bernard-de-Lacolle, Que., a route thousands of Haitians would follow a decade later. After his refugee claim was rejected, he applied for permanent residency on humanitarian and compassionate grounds.

Over the next decade, Francisque carved out a new life Edmonton. He worked in construction, bonded with friends at church and volunteered his time driving newcomers around the city.

His determination to stay grew stronger after his mother was killed in Haiti's 2010 earthquake that destroyed their family home. His eight children fled to various countries and his brother was murdered in 2013, he said.

"I go down there and what happens?" asked Francisque. "They're still looking for me."

This year his health began to deteriorate. As pain spread to his neck, back and limbs. he struggled to lift tools and walk. Mornings were occupied by daily trips to the hospital to take antibiotics.

Francisque was forced to give up his $30-an-hour carpentry contracts for a part-time cleaning job at West Edmonton Mall. He earned $13 an hour as his medical expenses mushroomed.

With no health-care insurance, Francisque estimated he has paid $5,000 for doctor's appointments, a biopsy and antibiotics.

But those struggles seem surmountable compared to the consequences of returning to a country with under-equipped, run-down and expensive hospitals, he said. He explained he has nowhere to live, no means to support himself and no family to care for him.

"We can't send somebody outside the country when he's sick," said Said David with the Council of Canadian-Africans, who began advocating for Francisque last January. "This is a basic human right."

In Haiti there are just two organizations that treat drug-resistant TB, according to Dr. Evan Lyon, of Partners in Health, which offers the treatment.

But Lyon said capacity for complex infections is limited while general health care is inaccessible, often unavailable and of poor quality.

"I think the greatest likelihood is he would die of the disease if he were removed," said Lyon.

"All other things considered, he has a curable disease and he deserves a chance to have that treated."

In a letter dated Jan. 6, 2017, Immigration, Refugees and Citizenship Canada accused Francisque of being a member in a militia called the Volontaires de la Sécurité Nationale (Tontons Macoutes).

Francisque denies that. He said he refused to be recruited by another politically violent group, making him a target in more ways than one. The group also falsely labelled him a Macoute, he wrote in his affidavit, which was submitted to Citizenship and Immigration.

The Tonton Macoutes was a militia that beat, tortured and murdered political opponents, propping up both the dictatorships of Francois "Papa Doc" Duvalier and his son Jean-Claude "Baby Doc" Duvalier.

"It was a force of terror," said Brian Concannon, executive director of the Institute for Justice and Democracy. "What both Duvaliers wanted was a cowed population."

He said members ranged from "evil sadists," which included most of the leadership, to those in search of a meal or meaning. Others were influenced by friends, pressured or joined as a means of survival, he said.

"If the Tonton Macoutes were terrorizing your neighbourhood, that was one way of getting security for you and your family," said Concannon.

The militia hasn't formally existed since 1986 and hasn't resurfaced since the late 1980s, he added.

Documents from Francisque's lawyer show evidence submitted to Canadian authorities included a sworn letter from a close friend who knew Francisque in Haiti, stating he was not a member of any criminal organization.

A police certificate from the Haitian State Police indicates Francisque doesn't have a criminal record, which is also the case in Alberta.

David says the police certificate is the only criminal record check the Canadian government will recognize but that's not happening in this case.

"They still don't recognize it," said David. "They contradict themselves. This is disturbing. That's why I think he didn't receive a just hearing."

They believe Francisque was mistakenly deemed to have ties to the Macoutes during his 2008 refugee board hearing, when he tried to explain his situation in broken French. But despite requests, they say they have not received details about the allegations.

"They don't have any proof," said David. "They've just misinterpreted what he said in his first hearing."

According to Sharry Aiken, an immigration law expert from Queen's University, expert counsel is required in such complex cases because the threshold of guilt is so low.

"Something akin to mere suspicion is generally enough to brand somebody inadmissible on security grounds," Aiken said.

She said the Supreme Court has been clear that although the government is entitled to protect information on the basis of national security, it's required to provide an adequate summary of allegations. If not, she said, counsel can challenge the department's failure to do so and a complaint can also be made to the Security Intelligence Review Committee.

"If you don't know what the allegations are, it's almost impossible to set the record straight," said Aiken. "On the ground when these decisions are made by frontline people working in the system they often over protect information on national security grounds such that it becomes very impossible for the person to dislodge an erroneous conclusion about them."

But it doesn't appear Francisque has exhausted his legal options. His lawyer can apply for a judicial review or a discretionary ministerial request, said Aiken. And an application for a pre-removal risk assessment is also still pending in his case.

The Canada Border Services Agency does not discuss individual cases, in accordance with the Immigration and Refugee Protection Act and the Privacy Act, said spokesperson Luke Reimer, in a statement to CBC News.

"Once individuals have exhausted all legal avenues of appeal/due process, they are expected to respect our laws and leave Canada or be removed," he said.