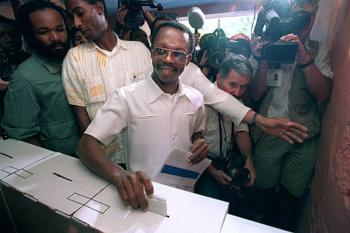 Jean-Bertrand Aristide voting on Dec. 16, 1990 in an historic election that he was winning with 67% of the polling when the Electoral Council stopped counting.

It was the first time Haitians were able to directly and democratically elect their president. Previous Haitian presidential elections (not counting those marred by violence  in November 1987 or fraud and abstention in January 1988) had been mediated by Haiti’s Parliament.

But it also incurred the wrath of Washington, which fomented two bloody coups d’état against Aristide (1991 and 2004), followed by two foreign military interventions and occupations. The second continues to this day.

This imperial head-lock on Haiti’s electoral system and economy has resulted in the contested election on Nov. 20, 2016 (with 81% of the electorate not voting) of Pres. Jovenel Moïse, Haiti’s second neo-Duvalierist head of state since the 2010 earthquake.

Today, Haiti’s masses, including the base of Aristide’s party, the Lavalas Family, are rising up nationwide in massive demonstrations which threaten to drive Moïse from power before the end of his five-year term.

The following statement comes in the context of this uprising, which is likely to resume with renewed force in the early months of 2019.

There is a grave crisis in contemporary Haitian society, in which the masses of our people are opposing an oligarchy determined to perpetuate a system of exclusion.

There have been many bumps in the road since February, 1986, when our people overthrew the Duvalier regime. Several coups d’etat have occurred, with the most damaging to the population having taken place in 1991 and 2004. Despite continued battering by the repressive and ideological machine, the more conscious and militant sectors of the population have stood firm; their resistance has been constant despite periods of setback.

WE ARE WITNESSING A GENERAL AWAKENING OF NATIONAL CONSCIOUSNESS.

At the present time, we are witnessing a general awakening of national consciousness. In addition to the population rising up to insist on better living conditions, with demands coming from many different sectors, including workers, peasants, educators, and students, the scandal involving the embezzling of the Petro-Caribe funds has provoked a big upsurge in mobilization against corruption and impunity. As so often occurs throughout history, the Petro-Caribe scandal has raised the awareness of the overwhelming majority about the unjust economic and political system, revealing the cause-and-effect relationship between this system and the sufferings of the Haitian people. Large masses of the population have come to understand with greater clarity and intensity the urgent necessity to take their destiny in their own hands.

As usually occurs during periods of dynamic struggle such as the present, the oligarchy is fractured. Attempting to maintain the status quo, it is faced with internal contradictions regarding the strategy that would allow it to save “the system” – a sham institutional “democracy” set within a framework of an economic and social regime based on glaring inequalities, a stranglehold on political power that excludes the popular masses, and the pillage of national resources.

Fanmi Lavalas Political Organization is always closely tuned in to the various sectors of the population, and our conclusion is obvious: it is time for the political class to muster the courage to initiate a profound change in the paradigm and structures of governance that characterize the present system. This is a necessity that has a wide consensus as manifested by the ever-growing magnitude of anti-government mobilization that we are witnessing today. It is imperative that we respect the people’s aspirations for progress and for a just society. It is paramount that we stand in solidarity with the people’s protests demanding a new form of state. The nation deserves a new system that is more in harmony with the dreams of our founders, a new vision of the Republic rooted in Justice, Transparency and Participation.

The population is rejecting the usurpers who have derived their power from the fraudulent elections and who have discredited themselves with multiple scandals involving corruption and impunity. Our people are facing savage repression that continues to create victims among the disadvantaged masses, and that is heightening the insecurity that is poisoning daily life for the majority. The Fanmi Lavalas Political Organization continues to stand firmly with the Haitian people to “chavire chodyè a” (overturn the cauldron). No cosmetic solution will bring an effective and lasting solution to the crisis in which we are plunged. This system has run its course. It cannot be patched up. It must be changed.

THE FANMI LAVALAS POLITICAL ORGANIZATION CONTINUES TO STAND FIRMLY WITH THE HAITIAN PEOPLE TO “CHAVIRE CHODYÈ A”(OVERTURN THE CAULDRON).

“Chavire chodyè a” means that we consider this moment to be exceptional. The deterioration of the political situation, the degradation of the economy and public finances, the failure of the state and its institutions, the lack of legitimacy and the absence of credibility at all levels of the state apparatus, make illusory if not impossible an end to the crisis by so-called constitutional means. The conditions for a new beginning that will put the country back on track, in keeping with the demands of the overwhelming majority, require an exceptional approach. For Fanmi Lavalas this includes:

1) Obtain the resignation of Jovenel Moïse through a general mobilization

3) Assess the dysfunction and lapses in the Parliament

4) Put in place an executive and a government of public safety to ensure a transition for a period of 36 months.

This transition government will consist of credible personalities, engaged in the struggle against exclusion and corruption, who share a vision of a new method of governance. Among the priorities to be included:

a) Improve the living conditions of the population by the sound and efficient management of current priorities pending the installation of an elected government.

b) Create a constituent assembly for a new fundamental charter that will define the features of the new Republic.

d) Create the conditions that will end impunity and allow for a trial of those who have absconded with the Petro-Caribe funds.

e) Take all measures to revise the Electoral Law and appoint a new electoral council charged with organizing elections to close out the transition period.

The transition aims to implement fundamental reforms that would allow a democratic process and would make possible free, honest and credible elections. The transition must restore confidence between the people and the state. In this light, the demands of the popular masses must be taken into account on all issues. True to its commitment to social justice and participation, Fanmi Lavalas will play its role alongside the population in continuing to promote the dialogue that is indispensable among the sons and daughters of the same land.