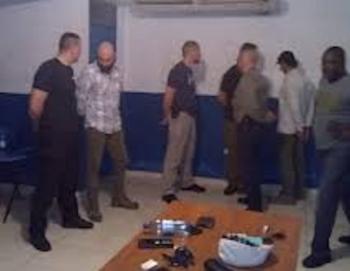 Six of the seven foreign mercenaries captured by Haitian police are shown here at the Central Directorate for the Judicial Police (DCPJ), where they were held from Feb. 17 to Feb. 20.

In an open letter to U.S. Ambassador Michele Sison, Haitian human rights law firm the Bureau des Avocats Internationaux (BAI) denounced the U.S. government for undermining stability, sovereignty, and the rule of law in Haiti by securing the illegal release of seven American mercenaries arrested by national police on Feb. 18, and an American military officer arrested for rape in January.

The mercenaries, who claimed to be on a “government mission,” were intercepted by Haitian police in an unlicensed vehicle with a cache of automatic rifles, and pistols. They were arrested on weapons trafficking charges but later transferred into U.S. custody and taken to Miami, where they were released without charge, sparking outrage in Haiti. Social media posts showed the men being escorted through the airport and onto the Miami flight by U.S. Embassy staff. One of the men involved, ex-Navy SEAL Chris Osman, publicly lauded the release operation, stating “I have seen the weight of the U.S. Government at work and it’s a glorious thing”.

The BAI’s letter states that “this illegal release is a slap in the face to the Constitution… to the police officers who risked their lives to intercept these mercenaries, and to the judges whose work demands complete independence free of [political] pressures.”

The letter also draws attention to another recent case of apparent Embassy interference. In January, an American military officer arrested and charged in Haiti for gang-rape was freed from jail and returned to the U.S., where he was apparently released without charge. BAI lawyers, who represent the officer’s victim in Haitian national court proceedings, discovered his release when the accused failed to appear before the investigating judge in the case.  When judicial officials subsequently reviewed prison registers, they discovered he had been transferred to the Central Directorate of Judicial Police and repatriated, in violation of Haitian laws.

“The BAI fears that the US Embassy is exploiting a corridor of corruption within the Central Directorate of the Judicial Police and the public administration in order to secure the release of Americans involved in criminal acts in Haiti, in defiance of the Haitian justice system,” wrote Mario Joseph. “For we note that the illegal liberation of the seven mercenaries is far from being the only case of interference by the Embassy of the United States in the internal affairs of the Haitian justice system. On Jan. 26, 2019, the Embassy organized the escape of the rapist Marc Kerby DELVA, a U.S. military officers who had been imprisoned in the national penitentiary subject to orders of the legitimate Haitian authorities.”

Ambassador Sison has not explained the Embassy’s involvement in either case, which runs directly counter to official State Department policy of non-interference in the Haitian judicial system for American citizens arrested in Haiti.

“The U.S. Government pretends to support the rule of law in Haiti, yet the Ambassador is shamelessly shielding criminals from the law and undermining the independence of the justice system” said Mario Joseph, Managing Attorney of the BAI.

USAID has spent more than $470 million on governance and rule programs in Haiti since 2010, and strengthening access to justice for victims of sexual and gender based violence is a stated U.S. Government priority in Haiti.

THERE ARE MURKY CONNECTIONS BETWEEN THE MERCENARIES, HAITIAN GOVERNMENT ADVISERS AND BUSINESS BACKERS, AND THE U.S. GOVERNMENT

The mercenaries’ illegal release comes amid intensifying popular protests in Haiti to oust President Jovenel Moïse, who is accused of corruption, mismanagement, and violent repression of political opponents and protestors. The BAI’s letter notes that the Embassy’s actions raise serious questions about the U.S. Government’s role in the men’s presence in Haiti, their possible involvement in recent repression of anti-government protests, and of collusion between the Embassy and corrupt government officials. Those questions are intensified by an in-depth investigation by the Center for Economic and Policy Research released on Mar. 11, revealing murky connections between the mercenaries, Haitian government advisers and business backers, and the U.S. government. The embattled Moïse has enjoyed strong U.S. backing, with Ambassador Sisonand National Security Advisor John Bolton issuing statements of support in recent weeks, and political affairs Under-Secretary of State David Hale in Haiti last week to broker a compromise to the political crisis facing Moïse’s administration.

In the gang-rape case, the BAI is seeking to locate the accused and pursue judicial action in the United States.

“These are blatant examples of U.S. hypocrisy and disdain for Haitians’ human rights, sovereignty and the rule of law” said Beatrice Lindstrom, Legal Director of the Institute for Justice & Democracy in Haiti, the BAI’s U.S.-based partner organization. “The Embassy and State Department must immediately explain their role in these scandals, and how they intend to ensure that American citizens accused of serious crimes in Haiti will be held accountable for their actions.”