The long legacy of occupation in Haiti 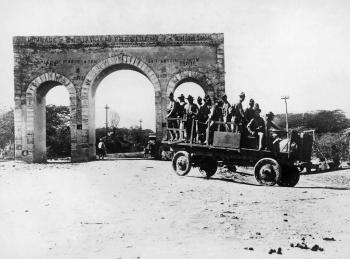 American troops in Haiti in 1929. A hundred years after the U.S. occupation began, the désocupation has yet to come.

I am writing this in Les Cayes, Haiti, where one of the worst massacres of civilians took place on December 6, 1929, during the nineteen-year American occupation of Haiti, an occupation that began a hundred years ago today. The Cayes massacre took place during a demonstration, which was part of a nationwide strike and an ongoing local rebellion. U.S. Marine battalions fired on fifteen hundred people, wounding twenty-three and killing twelve.

On July 28, 1915, United States Marines landed in Haiti on the orders of President Woodrow Wilson, who feared that European interests might reduce American commercial and political influence in Haiti, and in the region surrounding the Panama Canal. The precipitating event was the assassination of the Haitian President, Jean Vilbrun Guillaume Sam, but U.S. interests in Haiti went back as far as the previous century. (President Andrew Johnson wanted to annex both Haiti and the Dominican Republic. Twenty years later, Secretary of State James Blaine unsuccessfully tried to obtain Môle-Saint-Nicolas, a northern Haitian settlement, for a naval base.) By 1915, the Americans were also afraid that an ongoing debt Haiti was forced to pay to France tied the country too closely to its former colonizer; Germany’s growing commercial interests in Haiti were another major concern. So one of the first actions carried out by the U.S. at the start of the occupation was to move Haiti’s financial reserves to the United States and then rewrite its Constitution to give foreigners land-owning rights.

There is a commemorative banner near the site of the 1929 massacre acknowledging the day—something to show that the town remembers. But it is very hard to figure out what to commemorate, what to remember and what to forget, during a nineteen-year occupation.

In my own family, there were many stories. My grandfather was one of the Cacos, or so-called bandits, whom retired American Marines have always written about in their memoirs. They would be called insurgents now, the thousands who fought against the occupation. One of the stories my grandfather's oldest son, my uncle Joseph, used to tell was of watching a group of young Marines kicking around a man’s decapitated head in an effort to frighten the rebels in their area. There are more stories still. Of the Marines' boots sounding like Galipot, a fabled three-legged horse, which all children were supposed to fear. Of the black face that the Marines wore to blend in and hide from view. Of the time U.S. Marines assassinated one of the occupation’s most famous fighters, Charlemagne Péralte, and pinned his body to a door, where it was left to rot in the sun for days.

The notion that there were indispensable nation-building benefits to this occupation falls short, especially because the roads, schools, and hospitals that were built during this period relied upon a tyrannical forced-labor system, a kind of national chain gang. Call it gunboat diplomacy or a banana war, but this occupation was never meant—as the Americans professed—to spread democracy, especially given that certain democratic freedoms were not even available to the United States’ own black citizens at the time. “Think of it! Niggers speaking French,” Secretary of State William Jennings Bryan said of Haitians.

During the nineteen years of the U.S. occupation, fifteen thousand Haitians were killed. Any resistance to the centralized, U.S.-installed puppet governments was crushed, and a gendarmerie—a combination of army and police, modelled after an occupation force—was created to replace the Marines after they left. Although U.S. troops officially pulled out of Haiti in 1934, the United States exerted some control over Haiti’s finances until 1947.

A few days ago, I found myself standing between Mapasse and Jimaní, at the border between Haiti and the Dominican Republic, a border drawn with American help in 1936.* On May 13, 1916, the United States invaded the Dominican Republic for the first time, annexing the two countries for eight years, between 1916 and 1924. During the 1929 U.S.-guided border negotiations, Haiti lost some land, and many Haitians suddenly found themselves on Dominican soil.

The occupation of the Dominican Republic, like the occupation of Haiti, was motivated by regional and commercial interests. “In the Dominican Republic, American multinationals laid out vast new sugar plantations, which needed more workers than Santo Domingo could provide,” Michele Wucker writes in “Why the Cocks Fight: Dominicans, Haitians, and the Struggle for Hispaniola.” “Haiti, with the same population but half the land, was a natural source, so the companies moved thousands of people across the border, establishing a steady flow from west to east.”

At the Jimaní-Mapasse border today, there is still a flow of hard laborers. They drag empty wheelbarrows past heavily armed guards through a dusty gate into the Dominican Republic, then return loaded with merchandise in what seems like a one-way commercial exchange. With the recent application of a court ruling allowing for the expulsion of Haitian residents of the Dominican Republic and Dominicans of Haitian descent, there is now a different kind of flow. At a nearby school and church on the Haitian side of the border, I met dozens of people who say that they were picked up by police and soldiers in the Dominican Republic, put in the back of pickup trucks, and dropped at the border. Some are Haitian-born, but many are Dominican-born, especially the children. Many have cards saying that they had registered for a regularization program, which was supposed to guarantee them some protection until their cases were decided, on August 1st.

The legacy of occupation and invasion, meanwhile, has continued to shadow Hispaniola in the decades since the U.S. officially pulled out. United States Marines invaded Santo Domingo in 1965, and carried out an intervention in Haiti in 1994. Some observers charge that the U.S. State Department manipulated the results of the 2010 Haitian Presidential elections. The United Nations Stabilization Mission in Haiti (minustah) now operates in the country. Several forensic studies indicate that minustah peacekeepers likely introduced the cholera epidemic that has killed more than eight thousand people in Haiti, but U.N. officials have refused to accept responsibility.

In what has become a famous mea culpa by one of the architects of the joint occupation of Haiti and the Dominican Republic, the Marine Corps General Smedley Butler confessed, in an article in the newspaper Common Sense, that he spent thirty-three years as a “high class muscle man for Big Business” and as “a gangster for capitalism.” “I helped make Haiti ... a decent place for the National City Bank Boys,” he wrote. “I brought light to the Dominican Republic for American sugar interests in 1916.” His confession, in 1935, was the beginning of his own désocupation, or freedom from these occupations. Our désocupationhas yet to come.

*A previous version of this story mistakenly identified the border between Mapasse and Jimaní as the southernmost point between Haiti and the Dominican Republic.