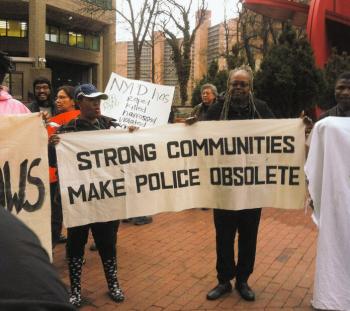 A protest in New York against police violence. Prioritizing our poorest citizens can diminish law enforcement's role while creating opportunities to employ those at the bottom of the economic ladder.

On Oct. 26, 2020, Philadelphia police gunned down in the street Walter Wallace, a Black man suffering from mental illness. Wallace’s mother, who was at the scene pleading with the policemen not to shoot, denounced the murder, and thousands have demonstrated in Philadelphia and nationwide against yet another case of senseless, lethal police violence. The Haitian-American community, unfortunately, also has experienced such killings in recent years.

On Apr. 25, 2015, New York City police officers murdered David Félix, a 24-year-old Haitian immigrant, in the hallway of a Greenwich Village homeless shelter where he was living. David’s parents in Haiti had sent him with his siblings to live with relatives in Miami. Sometime in 2007, at the age of 16, David ran away from Miami to New York, where he lived on the streets and spent time in the infamous Rikers Island prison.

David had been diagnosed with schizophrenia, which is common among people who are homeless and/or have been incarcerated on Rikers Island. In fact, Rikers Island is the one of the three largest facilities in the U.S. to house people with mental health issues, a problem with which the jail is not equipped to deal.

After eight years on New York’s streets, David eventually landed in a supportive housing shelter, where the police came to question him about a violent purse-snatching that had happened some days before. Social workers let the police into the facility. They proceeded to David’s room and entered without knocking. David was startled and jumped from his 2nd story window into the facility’s courtyard. When he reentered the building, the police intercepted him. He was fatally shot in the ensuing struggle.

One might ask why David fled and then struggled. But consider the circumstances: 1) David was diagnosed with schizophrenia; 2) the police arrived with no warrant and no warning; 3) they entered his room unannounced. Simply put, the NYPD acted carelessly, and, in their negligence, they killed him.

On Jul. 17, 2017  at 1370 New York Ave. in East Flatbush, Brooklyn, Dwayne Jeune’s mother called 911 because her son was having an erratic episode. Police entered the premises and within minutes, Dwayne was shot at least four times. Police reports claimed Dwayne had a butcher knife and was tasered twice before being shot. However, given the threat and the excessive response, it is very unlikely the officers were in any real danger for their lives. Also, what if someone other than the police responded to this scenario? In fact, what if our mental health resources were such that more was done before Dwayne ever reached that crisis moment? What if he had regular visits from a therapist or social worker who helped keep him on his medication, looked after his well-being, and developed a rapport with him and an understanding of how to de-escalate a psychotic episode? And if a crisis is too much for that person to manage, why don’t we have well-equipped EMTs to handle the situation and help subdue him in a non-lethal way, like they do in other countries?

U.S. police forces have a lot of sophisticated military equipment. Why don’t we put the same energy and funding into tools that save lives instead of those that take them?

These are the questions the police abolition movement seeks to answer. It’s not asking to simply get rid of the police; it’s seeking ways to make people’s needs central so that the police-state eventually becomes obsolete, unnecessary. U.S. police forces, by and large, do not prevent crime, they respond/react to crime. If we lived in a society where people’s basic needs were met –  such as housing, food, schools, jobs, and healthcare – there would be less of a need to rely on the police.

ABOLITIONISTS CALL FOR PRIORITIZING THE NEEDS OF SOCIETY’S MOST MARGINALIZED, WHO INTERACT WITH THE SYSTEM THE MOST.

Abolitionists do not believe in a utopia built overnight. They call for prioritizing the needs of society’s most marginalized, because it is usually the poorest among us who have to interact with the system the most. When policies cut social programs like food stamps, childcare, or housing, people depending on those programs feel the impact of those cuts. They fully understand policy “implications” and how it affects their lives.

In 2020, U.S. capitalism is in crisis, and we see capitalist authorities value property more than human life. Billion-dollar corporations received trillions in stimulus money, while working and middle class people only received a one-time payment of $1200. Luxury apartments sit empty while homelessness continues to rise. With Covid-19 again spiking, unemployment will again surge, and many will have no way to pay rent when the eviction moratorium ends at the end of the year.

Without any support, it’s inevitable that crime will rise, and an ongoing police presence can do nothing to stop it. Some have cited a police slow-down in response to the ongoing protests as a cause for rising crime, but the police don’t prevent shootings, murders, and rapes; they only respond after the fact.

Police intervention is not solving crimes. According to the NYPD’s numbers, the total clearance rate in the last quarter (before the “slowdown”) for all crimes citywide was 26%, with rape 42% and murder 50%. For Brooklyn, the numbers were even lower: 24% clearance for all crimes, 36% for murder and 37% for rape. Since the 1990s, the NYPD’s budget has been awarded increase after increase, yet their presence and continued occupation of our communities has done nothing to stem violence.

Abolition prioritizes prevention, intervening before violence escalates in a community. One of my cousins told me she didn’t agree with defunding the police because “a social worker won’t stop the homeless man who follows me home and harrasses me.” She may be right: a social worker might not be able to stop that. But here’s what will: that homeless man having a place to live, his having access to medication and therapy, his having someone do a wellness check on him periodically. All these preventative measures would keep her and our communities safer than a police officer who will remove this person from the community, put them in jail, and have them come back to us even worse than they were before. In many cases, that person’s mental health issues may have been triggered by incarceration or police interaction. However, from the abolitionist approach, making sure someone has economic and health security in their life helps to ensure the community’s safety as a whole. Such a support system also employs folks of various skill levels.

WITH ASSISTED OUTPATIENT THERAPY, ARRESTS DECREASED BY 83%, HOSPITALIZATIONS BY 77%, AND HOMELESSNESS BY 74%.

Aside from the failed ThriveNYC program, we can point to Kendra’s Law, an outpatient therapy program that focused on reducing recidivism and institutionalization among folks with severe mental health issues. Although it is a court-ordered, punitive measure, the focus of the program is Assisted Outpatient Therapy (AOT). By utilizing AOT, arrests decreased by 83%, hospitalizations by 77%, and homelessness by 74%. You cannot get those results using the police. The problem with Kendra’s Law is that someone has to already be “in the system” (i.e. arrested) in order to ‘participate’ in it, hence it is court-ordered and involuntary. If a program like this was made less punitive and was a part of our public health infrastructure and available to those in need as an option, what would these numbers look like citywide?

Medics Instead of Cops

In Eugene, Oregon, there is a program that has been in practice for 31 years called Cahoots. Usually a team of two – a medic and a crisis worker – would be called to intervene when someone is having a non-violent episode, much like the one Walter Wallace had. Both team members are trained on various harm reduction and de-escalation techniques. According to their website, of the 24,000 calls the program responded to, only 150 required police backup.

Today, in New York, much like in other cities, the NYPD responds to a majority of mental health calls. Also, the program has saved Eugene $8.5 million dollars, which is very significant for a city with a police budget of $90 million. This is another measure that would require training and more hiring. It is possible that as police officers without community complaints against them transition out, they can be retrained into a responder program like Cahoots. Even regular citizens could receive the EMT and paramedic training needed to become a medic.

FOR ABOLITION TO WORK, THE COMMUNITY HAS TO BE IN THE DRIVER’S SEAT.

Proven practices like these help lead us into a healthier society. This points to the approach we can use to replace the police. For abolition to work, the community has to be in the driver’s seat. This is difficult under capitalism, which functions on the basis of exploitation and oppression. Hence, a systemic change is necessary for maximum and lasting results. Nonetheless, we don’t have to wait for the revolution to begin working for and demanding a new approach.

As stated before, the people living in a crime-ridden community know best where the interventions need to be made, and where the problems and pressure points are. By applying principles of abolition and prioritizing our poorest citizens, we can diminish law enforcement’s role in our society while creating opportunities to employ and empower those at the bottom of the economic ladder. We can put them in a position to fully participate in society, rather than exclude and criminalize them. In order for us to fully combat crime, our orientation has to be toward making communities stable and healthy so people can thrive without resorting to desperate risks that might find them incarcerated or worse.