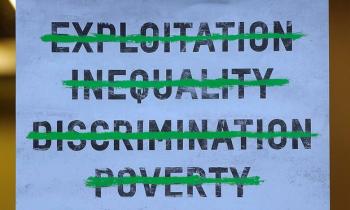 A poster in seen in the window of an Oxfam bookshop in Glasgow. Photograph: Andy Buchanan/AFP/Getty

In 2008 some of us had written to Barbara Stocking, then Oxfam chief executive, objecting to a report that it sponsored, Rule of Rapists in Haiti, which labelled Haitians as rapists while hiding rapes by occupying UN forces. The year before, 114 soldiers had been sent home for raping women and girls, some as young as 11. No one was prosecuted. We wrote: “NGOs like Oxfam have known about rapes by UN forces, as well as by aid and charity workers, for decades. It’s the pressure of victims, women and [children] in the most impoverished communities, who had the courage to speak out that finally won … public acknowledgement.” There was no reply.

The latest revelations of sexual abuse by major charities (Report, 13 February), are but one facet of NGO corruption. The people of Haiti were the first to free themselves from slavery, but the colonial “masters” they defeated – France, Britain and the US – have continued to plunder and exploit, including through imported NGOs. Haiti has more NGOs per square mile than any other country and it remains the poorest in the western hemisphere. Corruption begins and ends with neo-colonial powers.

While celebrated for “doing good”, NGO professionals do well for themselves. They move between NGOs, academia and political appointments, enjoying a culture of impunity while they exercise power over the poorest. The Lancet described NGOs in Haiti as “polluted by unsavoury characteristics seen in many big corporations” and “obsessed with raising money”.

Figures for earthquake relief range from $10bn to $13.4bn. Some of us who visited Haiti have seen little or no sign of that money. The public was outraged when they discovered the Red Cross intended to build a luxury hotel and conference centre in Haiti with some unspent donations. Big NGOs are far from non-governmental. For example, Oxfam receives millions from the UK government. USAID is another major funder. Unsurprisingly, NGO politics follow the cash.

In 2004 the US (backed by Canada and France) overthrew Haiti’s democratically elected president Jean-Bertrand Aristide. He headed a popular movement to chart an independent course that would move Haitians “from destitution to poverty”. His government supported small farmers, raised the minimum wage (the lowest in the western hemisphere), built schools and hospitals. (UNIFA, his medical university will be celebrating the graduation of its first class of doctors in March). The coup against him had NGO support. Charities thrive on the poor, not on ending poverty.