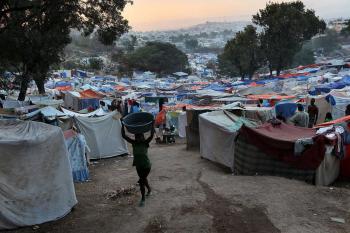 A woman carries water through the largest camp for earthquake refugees in Feb. 2010 in Port-au-Prince, Haiti. (John Moore/Getty Images)

The charity Oxfam admitted Friday that some of its employees engaged in sexual misconduct while doing disaster recovery work in Haiti, after an explosive report in a British newspaper detailed allegations that staff members were throwing “Caligula”-like parties with prostitutes at a guesthouse the charity had rented for them.

The Times of London’s investigation, published Thursday, also detailed allegations that Oxfam’s country director used prostitutes, as part of the raft of misconduct alleged to have occurred while the organization deployed to help the reeling island nation recover after a devastating 2010 earthquake.

Prostitution is illegal in Haiti; the age of consent is 18.

“This behaviour was totally unacceptable, contrary to our values and the high standards we expect of our staff,” Oxfam, one of Britain’s largest charities, said in a statement on Friday.

The Times’s report was based on sources familiar with the organization’s work in Haiti around that time as well as a report summarizing an internal Oxfam investigation into the allegations from the time.

The organization’s country director admitted having prostitutes come to the villa that Oxfam had rented for him, according to the internal report as cited by the Times. The director was not fired but offered a deal, the Times reported. He was allowed to resign, provided he cooperated with the investigation.

The Times reported that the organization’s inquiry was limited by its desire to keep it out of the public’s eye.

In addition to the country director, six other workers left the charity after its investigation: Two resigned during an investigation into whether they had used prostitutes, and four others were fired for offenses such as “use of prostitutes on Oxfam property” to having “pornographic and illegal material” on their official computers, the Times reported.

“The misconduct findings related to offenses including bullying, harassment, intimidation and failure to protect staff as well as sexual misconduct,” Oxfam said in its statement.

It said that it had not been able to prove allegations that underage girls were involved.

Oxfam, one of the largest charities in Britain, was in the midst of a large effort on the island after the quake, which killed more than 200,000 people, injured 300,000 and left more than 1.5 million displaced. The charity had a 70 million-pound fund — more than $100 million — to provide relief supplies and help rebuild the country’s infrastructure, the Times reported. The majority of its 230 staff members working in Haiti at the time are not accused of doing anything improper.

But a small group of male aid workers living in Delmas, near Port-au-Prince, had turned the guesthouse Oxfam had rented for them into what a source told the Times the men called “the whorehouse.”

At the time the organization wrapped its investigation, it issued a news release that did not mention sexual misconduct but said some staff had been involved “in a number of instances of misconduct,” the Times reported.

In its statement, Oxfam said it had informed its trustees, the United Kingdom government’s Charity Commission and international development agency, as well as other major donors such as the European Union, the World Health Organization and other United Nations agencies of the investigation and the outcome. And it said it created a whistleblower hotline and a separate team to prevent misconduct in the future.

The Times reported on Friday that the government secretary responsible for charity regulation was calling for Oxfam to provide more information about the charity staff who had paid for sex in Haiti.

“These allegations are deeply shocking and Oxfam must now provide the Charity Commission with all the evidence they hold of events that happened in Haiti as a matter of urgency,” culture secretary Matt Hancock said, according to the Times.