Oxfam prostitution scandal in Haiti deepens suspicions of other NGOs 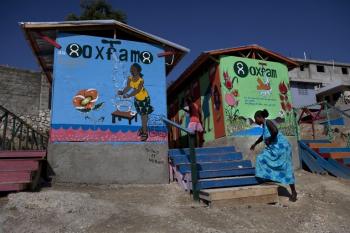 A latrine project led and financed by Oxfam for displaced Haitians living in Port-au-Prince in 2011. Credit Jonathan Torgovnik/Getty Images

SHARMINI PERIES: It's The Real News Network. I'm Sharmini Peries coming to you from Baltimore. The scandal involving the British aid organization Oxfam took a new turn on Thursday when the government of Haiti announced that the group would be suspended from all activity in Haiti for a period of two months. During that time, the government will conduct an investigation into the reports that Oxfam aid workers engaged in sexual misconduct in the period following the 2010 Haiti earthquake.

The story of sexual misconduct among Oxfam workers first emerged two weeks ago, when the British newspaper The Times revealed that an Oxfam whistleblower had alerted the organization to the issue back in 2011. Oxfam at the time conducted a secret investigation and six Oxfam workers were forced to leave as a result. Earlier this week, Oxfam's chief executive, Mark Goldring, issued an apology for the misconduct during a parliamentary hearing.

MARK GOLDRING: I am sorry, we are sorry, for the damage that Oxfam has done, both to the people of Haiti, but also to wider efforts for aid and development by possibly undermining public support. So, I wholeheartedly apologize for those comments, and commit to work in that greater public interest so that Oxfam can make a powerful role in the work that we all believe in.

SHARMINI PERIES: To analyze the broader context in which this aid work scandal has broken is Kim Ives. Kim is an editor for Haiti Liberté and Haiti's largest newspaper. He joins us today from Brooklyn. Thank you so much for joining us, Kim.

SHARMINI PERIES: So Kim, tell us more about exactly what Oxfam workers are being accused of in terms of this scandal involving their organization.

SHARMINI PERIES: Kim, how is this scandal being received in Haiti? Now, I know this is not new, because the peacekeepers were also charged with and was found to be involved in similar activities. That's the UN Peacekeeping Forces. The Secretary General actually had to come out and make several apologies related to that, but how is this being an NGO, is it different? Are people more scandalized by these findings?

KIM IVES: I think people knew it. It's an open secret in Haiti. The NGOs are really just like the good cops next to the so called peacekeepers, Haitians call them US occupation troops, which are the bad cops. One carries a gun, and the other carries a pen, but they essentially serve the same empire. They're both parts of the neoliberal domination of the country. The peacekeepers are there to, in a sense, debilitate the state, and the NGOs are there to fill in the gaps created by that debilitation.

The reaction on the official level is now great outrage. They're shocked, shocked that such a thing has happened and they've given this two-month hiatus in their operations. But it's really opening an open door or I should say closing a closed door because Oxfam Great Britain was not functioning in Haiti anyway. And the other Oxfam organizations, Oxfam International, at least three of them are still functioning in the country. So, it's a largely symbolic move by the Haitian government to look as if they're as outraged as everybody else.

SHARMINI PERIES: Does the Haitian government have responsibility for this type of behavior on the part of Oxfam, and I imagine other NGOs working there, as well?

KIM IVES: As I say, this Haitian government, like past ones, is a very weak and has been weakened precisely by Washington's policies in Haiti. This is really a conscious move. Over the past three centuries, which essentially started with Haiti as the first independent nation of Latin America, we have seen a lot of countries gain independence, but they became in essence neo colonies. This was through the imposition of, formerly, they did it with dictators, but that created too many revolutions, too many Che Guevaras. So, now they engineer elections in these countries.

That's what they did in Haiti. They engineered an election which put in power a neo-Duvalierist government. This government is basically an appendage of Washington or I could say a product of Washington's election engineering. Previous governments I can't say did much better, but that's because they are so debilitated by this neoliberal imperial regime that exists not just in Haiti but really throughout Latin America and most of the Third World.

SHARMINI PERIES: Now, last week, President Moïse said that this scandal was the visible part of the iceberg. What did he mean by that? Is there other incidents similar to this involving NGOs that is still come to light?

KIM IVES: Oh yes. I was speaking actually to a PhD doctor who has been working in Haiti for 30 years, and he estimates that at least 50% of the NGO workers and officials in Haiti engage in prostitution of this nature. You know, they've gotten six or seven people here. Apparently 26 other are now in the dock for this. And I think it is just the tip of iceberg, as many have said.

SHARMINI PERIES: That's a large number of NGOs. Is there evidence of this kind of behavior officially documented that the president is referring to?

KIM IVES: Well, no, I don't think it's been documented precisely, although it's seen by the Haitian people. They see these NGO workers going to parties and hanging out in Pétion-Ville, that's the chic suburb of Port-au-Prince, and having parties, and having prostitutes, and so on and so forth. In a way, I just think we should say that this is almost a distraction,because the harm the NGOs are doing to Haiti is much greater than just using some prostitutes or having some girls over for a party.

They have really debilitated, you have to ask yourself, how is it that Haiti is sometimes called the Republic of NGOs? Why is the country with the most NGOs per capita in the world one of the poorest on the quality of life index, while its neighbor, which has the lowest number of NGOs and the most controlled NGOs in the world, has the highest quality of life? I'm speaking about Cuba. So, we can really see a correlation between the presence of NGOs and the very difficult life quality. A lot of exploitative things happen. A lot of offensive things happen and I think people's dignity are basically trampled when these NGOs come to town, along with the peacekeepers.

SHARMINI PERIES: Now, the NGOs are there because there is no state infrastructure to respond to the needs of the people. And so, if these NGOs were pulled out of the scene, what is left? What is going to be there to actually support and assist people make their livelihood healthy and sustainable?

KIM IVES: I think the Haitian people are capable of self-determination. I think they can. They built a country 200 years ago in 1804. They created many institutions. They created industries, agriculture, but the arrival, especially, of the US Marines in 1915 really marked the beginning of a long descent of Haitian agriculture, and industry and culture even. We're really almost at the nadir now, I believe. And what we're experiencing with these NGOs who are in there supposedly to fill the void. If they were gone, if the peacekeepers were gone, if all the US and European oppressive presence was gone, I think Haiti would be fine.

And his is what I think countries, not just Haiti, but countries throughout the Third World are asking. They want self-determination. They want the First World off their back. They come to those countries. They suck out the resources. They meddle in the politics. They dictate to the central bank and to the directors of the nation in terms of political and economic affairs, how to conduct their affairs. So, that's why they're called neo-colonies, and I think they would do very well without the US big brother telling them what to do.

SHARMINI PERIES: Kim, while I agree with you that Haiti is an incredibly militant revolutionary of Simón Bolívar and Toussaint L'Ouverture, and others that you can mention, but they're not there at the moment. And if these NGOs were to be pulled out at this moment, it would leave a huge vacuum in terms of basic health and infrastructure services currently being provided by them. What would actually happen to the people, the children, the young orphans left behind and so on?

KIM IVES: Well, I don't think there would be the collapse we think. I think, on the contrary, the NGOs have supplanted a lot of Haitian institutions. They've pushed out a lot of Haitian institutions. What was happening a lot in, really before the arrival of the NGOs, were revolutionary movements, were mass organizations that were fighting to keep and take back control of their country. But the NGOs came in, and they're very insidious because they use a lot of the same vocabulary, popular power, empowerment, bottom up, grassroots, this and that. No, they are fundamentally wolves in sheep's clothing, I believe.

Unfortunately, Oxfam is one of the more progressive of them. We know their index on poverty, where they show that the wealth gap that's growing in the world under capitalism. So, Oxfam's to be commended for those good things they did, but fundamentally, they're part of this NGO phenomenon, which is a part of neoliberalism, of imperialism. They are fundamentally the agents of imperialism, much the way the missionaries back in the 16th and 17th century were the agents of the colonial powers. So, the format has changed, and they're a little more sophisticated but this is really their role.

SHARMINI PERIES: All right, Kim. I thank you so much for joining us today and this is a very important story. I hope we can come back to it and cover it with you as it unravels itself.

KIM IVES: Thank you very much. I'm glad to be with The Real News.

SHARMINI PERIES: Thank you for joining us here on The Real News Network.