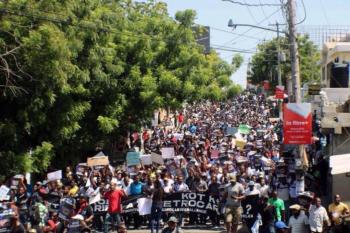 A demonstration in the capital in September demanding transparency on the squandering of PetroCaribe funds. Credit: Milo Milfort/Haïti Liberté

The Haitian National Police (PNH) has received notifications of events on the date, which marks of the 212th  anniversary of the assassination of Jean-Jacques Dessalines, Haiti’s founding father.

Several leaders of national and international organizations have indicated that they will answer the call on Oct. 17, according to Guy Numa, a member of the coordination of the People’s Democratic Movement (MODEP), which is part of a coalition political, trade union, and popular organizations.

The battle to demand that more light be shed on the use of PetroCaribe funds is being waged against a political system based on corruption and impunity, said a dozen Haitian citizens, from various sectors of Haitian society, in a note published Fri., Oct. 12, 2018.

They call for a rally of all progressive forces to prepare an alternative that can lead to systemic change.

The government has been wary of the citizens’ ”PetroCaribe Challenge” movement, which has grown on the streets in Haiti and abroad, since its launch on Mar. 14 2018 on social networks.

The Secretary of State for Public Security, Ronsard Saint-Cyr, asserted that there would be an effort to destabilize the country during the Oct. 17, 2018 mobilizations.

Sen. Antonio Cheramy likened these remarks to a pretext for the government to arrest leaders of several popular organizations and paralyze the Petrocaribe inquiry.

Schiller Louidor, a leader of the Fanmi Lavalas party, was interrogated on Tue., Oct. 9, at the Port-au-Prince Public Prosecutor’s Office by the government commissioner at the court of first instance, Clamé Ocnam Daméus, for declarations which the government deemed inflammatory.

Louidor had called on the population to participate in the anti-corruption demonstrations, announced for Haiti’s different cities.

Faced with threats of looting and arson, the authorities have taken measures to ensure the safety of some strategic public and private buildings from Oct. 14 until further notice, the PNH announced in an Oct. 5 statement.

The vacations and leaves of police officers have been canceled in order to keep on hand a sufficient number to guarantee public order, before, during, and after the historic day of Oct. 17, 2018.

For his part, Clamé Ocnam Daméus, in an Oct. 8, 2018 statement, expressed his concern that possible street demonstrations could turn violent.

”No anarchic or other political attitude ” to challenge the state’s authority, by resorting to tactics to destabilize state institutions, will not be tolerated, he warned.

The Port-au-Prince prosecutor intends to pursue instigators of violent acts and troublemakers in accordance with the law, to prosecute them in court.

For his part, President Jovenel Moïse, has undertaken a series of visits to police stations, police posts, and specialized police units over the past weekend.

He promised to improve national police officers’ working conditions. [Meanwhile, some Haitian police officers issued a statement saying they were “from the people and live among the people” and therefore they “would not fire on the people.” – HL.]

During a demonstration on Fri., Oct. 12, 2018, several students from different high schools in the capital Port-au-Prince denounced the squandering of PetroCaribe funds, some of which could have been used, they say, to build public schools.

These high school students who demonstrated in favor of the reconstruction of their damaged establishments during the earthquake of Jan. 12, 2010 entered the premises of the Marriott Hotel in Port-au-Prince’s Turgeau neighborhood.

[On Oct. 16, students from the Faculties of Law and Economics (FDSE) and Ethnology of the State University of Haiti (UEH) demonstrated in downtown Port-au-Prince as a precursor to the Oct. 17 demo. There were burning tire barricades and stone throwing by students demanding a “PetroCaribe trial” to lock up the squanderers of the fund PetroCaribe. – HL]

Since January 2018, more than 60 PetroCaribe complaints have been lodged with the examining magistrate, Ramoncite Accimé, who began the hearing complainants on Sep. 27, 2018.

Translation from the original French by Kim Ives.