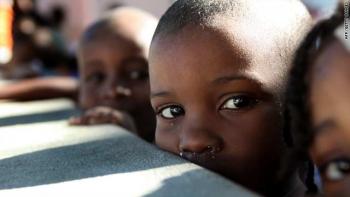 The youngest of six children, Christine was placed in an orphanage when her mother died, and her father could not care for another baby. She then spent the next 10 years in orphanages just outside the Haitian capital of Port-au-Prince.

In conducting research for the report, Funding Haitian Orphanages at the Cost of Children’s Rights, released during Haiti’s first national conference on Child Trafficking last month, I spoke with her and more than 40 other children and young adults with similar experiences.

Christine told me that what bothered her most about the orphanage was that “a lot of disabled kids came in and died.Only two stayed alive the whole time I was there.”

Globally, children with disabilities are the most vulnerable. In Haiti, I heard examples of this treatment again and again, and not just from children and young adults raised in orphanages.

Yet, an estimated 80 percent of children in Haitian orphanages have one or both living parents who did not intend for their children to meet this fate. Their decision to send their children away is usually a desperate one.

Mired in poverty with no access to education and healthcare, many families say Yes to recruiters from orphanages in the hope their children will have a better life. More often than not, that is not the case.

Christine’s experience was not uncommon: She was kicked out of the orphanage at age 13, without any preparation or effort to contact her family. The orphanage had already stopped sending her to school, and she had become numb to beatings for “misbehaving.”

Children from orphanages throughout the country reported similar abuse by orphanage staff. Other witnesses who worked or spent time in orphanages described violence and exploitation, malnutrition and disease, and many suspected sexual abuse and trafficking of children.

Orphanages rely on international financing and support to stay open, and for many entrepreneurs, this makes running them a lucrative enterprise based on a sustainable model: Recruit children from poor families with the promise of housing, health, and education, and ask for donations from foreigners.

Sustaining the model is a ready supply of well-meaning but unaware foreigners eager to support orphanages and spend time volunteering in them.

Through its review of traceable foreign funding, Lumos found that more than $70 million a year from primarily North American donors supports just over a third of Haitian orphanages.

The real amount is likely upwards of $100 million annually — roughly 100 times the budget for the country’s child-protection agency, the Institut du Bien Etre Social et de Recherches (IBESR). And with more than 750, privately run orphanages in Haiti, there is little the government can do to regulate care or respond to child protection concerns.

Aware of conditions at Christine’s orphanage, an IBESR spokesperson told me, “We wanted to shut them down, but we had problems with their lawyers.” He discovered the orphanage operated with a $2 million annual budget.

Despite these challenges, Haiti’s government remains committed to transitioning massive international support for orphanages toward alternatives that respect human rights — supporting children at home and in families, whether with their parents, in extended family, or foster family care.

And it has the support of the international development community.

Orphanage sponsors, volunteers, mission trips participants, and tourists need to understand that their support could be contributing to the mistreatment and death of children in orphanages.

JAMIE VERNAELDE IS A RESEARCHER IN THE WASHINGTON, D.C. OFFICE OF LUMOS, THE INTERNATIONAL CHILDREN’S RIGHTS ORGANIZATION FOUNDED BY J.K. ROWLING, THE AUTHOR OF “HARRY POTTER.”